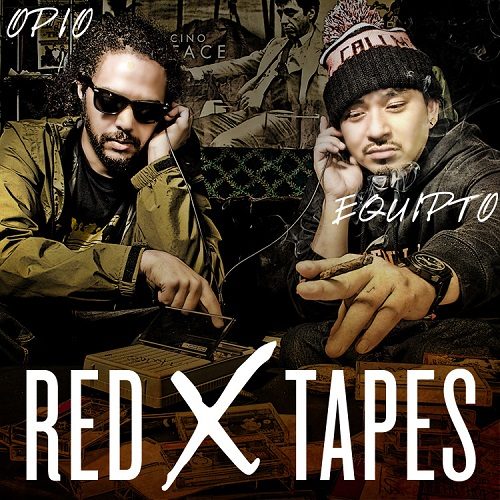 Last year in celebration of 4/20, Souls of Mischief and Hieroglyphics member Opio teamed up with Unjust to release “Mark It Zero: The Big Lebowski Tribute Album” digitally. 365 days later he’s back with fellow Bay Area veteran Equipto for “Red X Tapes,” a short record available online for the sleek price of $4.20. Don’t be fooled by the bargain-bin price tag or the connotations the release date’s festivities might imply – Ope and ‘Quipto are hardly fooling around:

Opio: “Doors in my brain start to open up
Hit ’em, too much pain, Ali with the rope-a-dope
Black stallion, I’ll trample all over ya
Have you in the flicks like Francis Ford Coppola
Mmmmâ€¦I’ll put these Nikes to your dome and um
Back for revenge, straight Michael Corleone-in’ ’em”

Equipto: “I’m not a critic, but it’s often I say
Sometimes I wonder why they got in this game
It’s like the radio determinin’ what’s hot in the Bay
And these cats playin’ the role, but see, I’m not entertained”

“Red X Tapes” has all the polish and quality of a full-fledged album, especially in comparison to “Mark It Zero” which while endlessly entertaining may have been more of a passion project. The excellent opener “Buildin'” has a slick, smooth late night vibe, and both MCs do it justice dropping science between the well-construed hook. Any who might doubt Hiero mainstay Opio’s ability to mesh with the more distinct Bay styles of Equipto will be impressed by their natural chemistry, and both rappers bring heady and fully-imagined verses, seeming to be exactly on the same wavelength. But it’s not just Ope and ‘Quipto who’ve showed up for the party – Living Legend favorite The Grouch shines on the socially conscious “Sumday,” Sunspot Jonz and L’Roneous lend a hand on the laidback yet lyrically potent “Starts with Love,” Mint Rocky rocks the upbeat cypher “On the Mic,” and even Del shows up to take it back to the “Golden Era.”

The album’s home stretch features its finest moments, where both rappers’ whimsical deliveries and clever lyricism meets outstanding production for a relaxed and particularly soulful product. “Fly Type” is a bright and appealing number featuring Spank Pops, and the ultra-funky “Stay Sharp” is a short piece of brilliance laced with punchy horns, smooth piano, and fine appearances from Z-Man and vocalist Michael Marshall, who sounds born for this type of production. Marshall returns for the standout closer “Lighters Up,” a flute-laden gem that makes for a tasteful smoker’s anthem.

“Red X Tapes” might at times seem like a haphazardly-arranged collection of collaborations, but the consistency of the strong production, lyrics, and seamless chemistry make it an addicting listen. It’s a laidback compilation perfect for the occasion, and Ope and ‘Quipto come armed with a batch of great material that is sure to have both the tokers and the passers coming back for more.