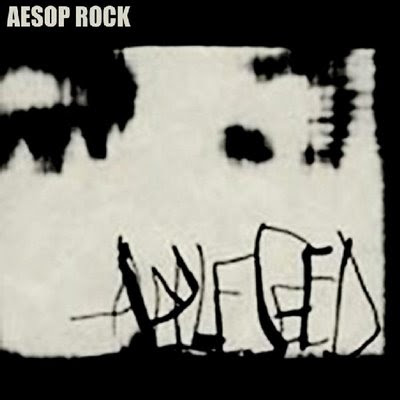 Every once in a while an artist comes along who makes a buzz for him or herself on the internet right before they blow up and blaze a trail across the national conciousness. Aesop certainly has been the talk of the town on the newsgroup rec.music.hip-hop and given the prevailing buzz this site’s own webmaster felt compared to check out his music and see if Aesop’s talent merited the pre-stardom hype he was certainly receiving.

For the most part, the answer is yes. Aesop’s rhyme style is the bastard child of Lyrics Born and Company Flow’s El-P being cloned in a genetics lab. The result is a neo-jazz rapper who enjoys ignoring convential boundaries of rhyme style and running triple syllable soliloquies at a moment’s notice. In wordplay he reaches abstractions Q-Tip has long since forgotten: ” Now I’m drowning in a pool of, ‘Why are you here?’/Sever ties with my beast of burden pertinent to if I die this year,” raps Aesop. Follow it? Mostly, you can understand what it says – but that’s the great thing about albums like this – when it goes over your head, press rewind and listen again.

Of course, it means nothing to have an incredibly fluid rhyme flow and perverse lyrical ability if you don’t have the beats to make it interesting. Aesop does – amazingly enough; he produces himself on all except for two of the tracks. “Dryspell” has the kind of finger-snapping beat you’d want to hear in a smoky jazz club, complete with the strumming bass. “Same Space” could easily pass for the kind of darkly funky tracks that the Anticon label has made famous; and the Omega produced “Sick Friend” could easily pass as a production from the lab of Fat Jack or Domino. Perhaps the most pleasing of them all is the bongo beat and slinky jazz style of “1000 Deaths”.

As an eight track EP, Aesop Rock’s “Appleseed” only has one major flaw — it’s too short.