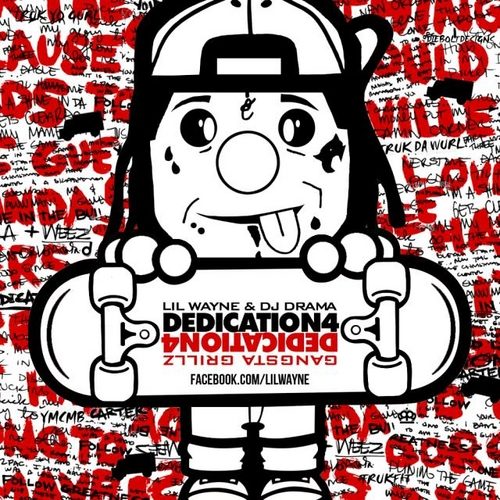 “It does get pretty boring when it comes to just the rapping and all that type of stuff. I’ve been doing it since I was eight and I’m about to be 30 in September.” – NME

If Dwayne Carter says he’s bored with rap one doesn’t have to look further than “Dedication 4” for the reasons why. He tries to play it off like this was all for lolz (JUST KIDDING WAYNIACS – DON’T STOP BUYING MY RECORDS & MERCH) and he was just kidding when he raps the lines “I’m skatin and rappin at the same damn time/I said I might retire, but y’all know I be high” on “Same Damn Tune.” The problem with that is that these 15 tracks are not a joke. The Dedication series has over the years been Wayne’s “thank you” to loyal fans who stuck with him through all his legal problems and industry drama – truly a dedication to the fans. Now he seems completely indifferent to them.

“Now suck dick, Trukfit, snapback on yo’ dog ass
These niggaz broke like +Mr. Glass+, they don’t want +nun+, +Sister Act+
It’s Young Money you bitch you, my weed louder than pimp suits
Your bitch swallow my pimp juice, her pussy wetter than swimsuits
Swish, Michael, Phelps nigga in your hoe
Coupe the color of Yoo-hoo, rude boy free Buju
Fuck wrong with these fuck niggaz I been ballin since ’98
Fuck y’all I’d rather skate, shoot you up in yo’ database”

Now let’s break this down to the organic compounds. First and foremost he’s rapping over Kanye West’s “Mercy” beat, which is a strong contender for the most overexposed song/instrumental of 2012. Secondly the movie references he’s making are really dated – Unbreakable came out 12 years ago and Sister Act came out TWENTY years ago. Arguably even the Michael Phelps reference is dated since his most historic Olympic performance was 2008 – for a swimming reference Ryan Lochte would have been more apt. Hell for the 2012 Olympics in general he’d have done better with Gabby Douglas or Jordan Burroughs. The sample here also shows off his obsession with Trukfit, his own line of skater apparel, which gets referenced in seemingly every song. Even a generous appraisal of this tactic reveals it to be no more than self-serving product placement, given his clothing line isn’t even notable enough for a Wikipedia page.

It’s not just that “Mercy” is problematic (Nicki Minaj’s verse alone sunk that ship) it’s that this entire album seems phoned in. Even a weary DJ Drama laments his fate in the opening to “Green Ranger” featuring J. Cole, stating he’s ready to “move on to other endeavors” and begging for “SOMEBODY, ANYBODY” to take over for him. I’ve appreciated Lil Wayne for his musical experimentation and defended his relevance when other critics wanted to write him off, but this album is indefensible. Songs like “Get Smoked” never need to have existed. If your best punchline is “I’m gettin head while givin head, that’s a head-on collision” just stop. It also revisits a song from an unimpressive Chicago rapper named Lil Mouse whose age shows in every bar. He tries to lower his pre-pubescent voice to sound hard and fails, and instead ends up delivering a monotonous rap that has nothing to say to nobody. It’s not even worth quoting, but I dare you to listen to it anyway.

Wayne’s penchant for “pause… punchline” has been parodied many times by comic emcees, but on “Dedication 4” Mr. Carter sounds like a parody of himself. It’s hard to make 2 Chainz sound brilliant, but at the very least Wayne should be five levels above him and his “No Lie” rap puts him in the same territory.

“Uhh, droptop Maybach, clean like Ajax
Man I don’t fuck with none of you niggaz like rednecks
We got that work so come and get if we don’t know you you pay tax
I put a hole in your apple what that is Applejacks, uh
Pussy nigga I’ll murder you then dance at your funeral
Blood I’ll have a nigga drinkin his own blood, communion
Wake up like Bone Thugs I’ll call your bluff pick the phone up
Her titties fake but they look real – cubic zirconias
Run up in your house spare the kids and kill the grown-ups
Your bitch call me when she hot – Krispy Kream donuts
Shoutout to my new hoes, shoutout to my old hoes
I still wear that ass out like a wardrobe”

There’s at least one cringeworthy line in nearly every song. “I smoke all these niggaz, call it +Nigatine+” comes from “Wish You Would.” “Hope your barber shop open, cause we got hair triggers” is in “No Worries.” “My niggaz got enough white to build Barack house” is in “Green Ranger.” I could go on, but I’d really rather not. The recycled beats on a “Dedication” tape used to be fun, but in this case they feel tiresome, 50% because the source material wasn’t too hot to begin with and 50% because I’d rather hear the originals than Wayne’s take. He may claim he was joking about retiring from rap to skateboard, but this is no joke, and Rakim’s not laughing either. If this is the kind of lazy effort Wayne is going to put forth then he might as well retire, live off his investments, and skate.