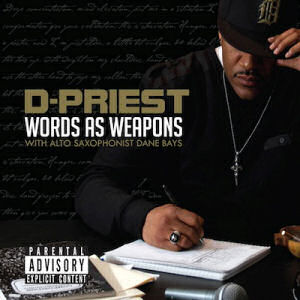 I’m honestly unsure what “new neo-rap soul” is. “Neo” means new to begin with so at best that description is redundant, but nonetheless it’s applied to D-Priest in the press kit for “Words As Weapons.” For what it’s worth though the album also features saxophonist Dane Bays, so at least the “soul” part could be applied to him. That leaves D-Priest as the neo-rapper though, and the “new” may be that he left a jazz ensemble called American Music Project to go out on the solo tip.

For better or worse using the name Priest and a title like “Words As Weapons” evokes images of Killah Priest, and for this writer at least it created expectations of a mystical, biblical, epic lyrical experience. At the least I expected that by working with an alto saxophonist to the degree he’d be credited by name on the album cover would results in some jazzy freshness without Fresh Prince or a DJ. Early on in the song “Fever” I couldn’t find what I was looking for, so I’ll take a tip from the press kit and check out the “hard hitting jam” called “They Say” to see what’s up.

Let’s reserve judgment on that last sentence for a moment. To call what D-Priest does on this song “rapping” would be incorrect. It’s actually more akin to a Saul Williams album. D-Priest has a point he wants to make, and it more or less rhymes most of the time, but he doesn’t really have what any one could really call flow. He’s reading poetry to a hip-hop beat, a fairly unimpressive one in fact, and the saxophone playing in the background is really the highlight. In the course of his diatribe D-Priest does make a few worthwhile points about the commercialized side of rap today including the statement “Who’s to blame? The listeners or the industry?” That’s worth pondering for a bit, but grandoise statements like “I come back and part the Sea like Moses, to free all my real emcees with focus” is as close as D-Priest gets to Killah Priest on this song or any other.

Now given that D is from Saginaw I wanted to give him his fair due and not judge him by his first few tracks. I still have a soft spot in my heart for Michigan having lived there for a few years, and there are some songs where he does pull it back to a more traditional rap format more easily accessible. The beat on “Murder of a Rhyme” may be underwhelming and the shout out to Royce Da 5’9″ a little obvious, but there’s something more enjoyable about his braggadocious “oh – you don’t know – I’ma kill this motherfucker fo’sho” attack on lyrics. That’s literal – he’s actually anthropomorphizing his words and then stabbing them to death. It’s almost horrorcore, something more like fellow Michigan emcee Esham would have come up with. I dig it.

On the whole though D-Priest’s “Words As Weapons” is problematic even if you ignore the accidental (or intentional) comparisons to Killah Priest his name generates. Each song has its own issues, many of them stemming from production which fails to generate a head nod feeling, which actually makes the instrumental free lyrical exercises like “Headrush (Interlude)” more enjoyable. The song titles themselves generate unrealistic expectations – “So Raw” isn’t and “Consistent” isn’t either. At some point the bad instrumentals and unconventional flows start to remind one of a self-produced Kool Keith album, but lacking Keith’s odd charisma that makes you want to indulge even his most bizarre side projects. There are a few winners though such as “Home (A Harmony of Musical Energy)” where his flow settles down and Bays’ alto sax livens things up. That would be a better recommendation than “They Say.”

I’ll say this much for “Words As Weapons” – D-Priest clearly has some gifts and some talent, but he needs a good producer and better direction. Is “the business” really for him? If he can’t take a review like this one for constructive advice it may turn out that his words are prophetic. The rap scene is already overcrowded as it is, so as much as he complains about garbage rappers who can’t rhyme, a mish-mash album that can’t deliver repeatedly is just adding to the glut on the marketplace. If he makes up his mind to be a spoken word poet with a sax player, there might be a niche for him a la Williams. If he wants to rap though, the rhymes and punchlines need to be less simplistic and more on time, and there’s no shortage of top notch producers for him in Michigan to link up with. Do it again Priest, do it better next time, and we’ll see if this business is really for you.