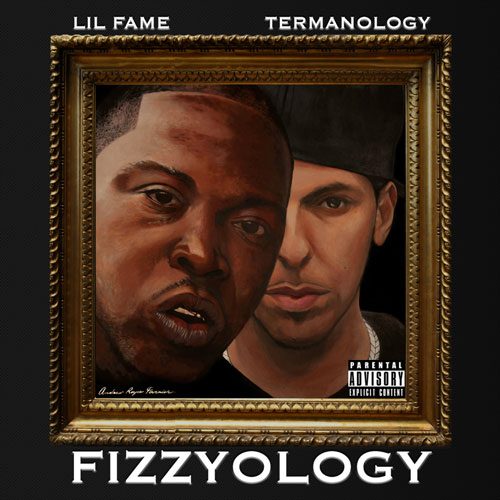 There’s little doubt that M.O.P. is among hip-hop’s most venerated hardrocks, a tandem of screaming Brownsville emcees matched only in NYC machismo by the earliest works of Onyx. While the greatest strength and subsequent biggest weakness of Onyx was that Sticky Fingaz always outshined his comrades, the M.O.P. team of Billy Danze and Lil Fame always seemed perfectly matched to each other in lyrical delivery and intensity. Though an infrequent song here or there would feature a cameo from only one of the two, it never felt quite right unless they both showed up to destroy a remix. Womack and Danzini seemed totally inseparable…

… until now. When the idea of “Fizzyology” first started circulating online I was naturally intrigued, though of the two Termanology has much more of a track record of collaborative projects. In fact I can’t think of a single “Fame + X = Group” other than “Fame + Danze = M.O.P.” which just goes to show how odd “Fizzyology” can be at first. If you’re a long time M.O.P. fan (and I am) you’re used to Fame and Danze completing each other’s lines, yelling out ad libs during each other’s verses, punctuating each other’s punchlines, and generally one-upping each other in verbally embodying testosterone. Termanology is not “soft” by any means, but you wouldn’t be wrong for wondering how the relatively mellow rapper (at least by comparison) could match with Fizzy Womack. As it turns out though “From the Streets” proves that Termanology CAN be amped up to Fame’s level – not to mention guest star Freeway!

Of course it doesn’t hurt that Statik Selektah produced a sweet track for all three to rap over, nor that DJ Premier laces the incredibly beautifully understated “Play Dirty” with Busta Rhymes and Styles P. The piano loop would sound awkward and wrong in anything other than a hip-hop context, but the minor keys mix with the banging bass and scratched in DMX drop “my hands stay dirty cause I play dirty” in the way only Primo can do to make your neck hair stand up. Despite the chance he could be bodied like crazy with such a line-up Termanology more than holds his own on the opening verse:

“I’m from the Law, we known as the hood where they hardly sober
The holster they carry, the toaster is always on the shoulder
I’m out for the pot of gold, if you trip, leave your body frozen
And I zip up you mighty goons, in the river your body goes
Don’t make me use the razor to show you my fruits of labor
Not even your crew could save you, you get in the booth I slay you
Kicked out of housin for flippin and wildin
And it’s the Puerto-rican kid with the guns that look Italian”

The track that might go overlooked amongst all this adrenaline though is “Hustler’s Ringtone” produced by Fame and featuring a cameo from Bun B. The background loop is (dare I say) a BRILLIANT snippet of Boogie Down Productions’ “Poisonous Products,” from an album that is itself overlooked. Termanology really gets it with the punchlines on this song, and he exhibits the perfect attitude about his status: “I ain’t stressin’ if I might get dropped/cause I never been signed, see the way that I rhyme/I’m a hustler muh’fucker.” Indeed!

Despite some misgivings about how well this collaboration would work going in, the appearance of Billy Danze on the Statik Selektah produced and super-amped up “Crazy” solifies that he’s cool with this project and puts the M.O.P. stamp of approval on Fame’s decision to branch out. For his part Fame stays just as adrenaline as he has been on any Mash Out album, vowing “if you looking for brotherly love it’s not here […] we kill cops here […] it only takes me 1.2 seconds to lose it.” The fact that Termanology for the most part comes up to Fame’s aggression level while simultaneously managing to not overdo it (which would just make him come off like a weak replacement for Danze) is laudable, and since Fame produces the majority of the album (and is himself underrated as a producer) it’s safe to say “Fizzyology” succeeds. I’d even be willing to consider this an unofficial M.O.P. album in their discography.