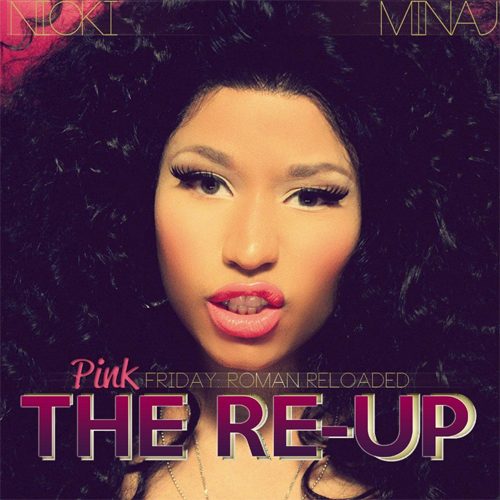 Just when you thought it couldn’t get anymore confusing. Are you ready for more “Pink Friday” from Nicki Minaj? It’s not the first one, but a second version of the second one, making it the third one. But not the official third one, not even a “Remix — no no, this is a “Re-Up” (to use the “drugs have nothing to do with this album” terminology). Basically, there is an all-new eight-track EP added separately, in addition to the original nineteen-song album released earlier this year. It brings the entire effort up to over 100 minutes worth of fresh ’12 material from Minaj, and that is nothing to sniff at. If you buy the physical copy, you also get some sort of DVD with another hour and a half worth of who knows what (I’m assuming music videos and concert footage). But for now, let us focus on the digital music-only version.

You may recall in my original review of “Pink Friday: Roman Reloaded” that I had numerous misgivings about the album. It’s not that I didn’t enjoy quite a few numbers — I most certainly did. It’s just that it felt like a double album squeezed into one disc, with a lot of fat attached and a complete lack of soul. What I can now admit, more than six months later, is that I have since listened to it, a lot. Well, not the whole thing, but certainly my own playlist of a dozen songs. Seriously, I’ve listened to it more (particularly at the gym) than pretty much anything else this year (which came as a surprise to me too). So when “The Re-Up” was announced, it was a pleasant surprise — it represents a chance for Minaj to balance out the feel of the album, to offer a new batch of songs to fans that wish to cherry-pick their favorites and personalise them. It’s worth mentioning that this is pretty much exactly what Lady Gaga — one of Nicki’s primary influences — initially did with “The Fame” and “The Fame Monster” (and RedOne produced much of Gaga’s work before his “Starships” and “Pound the Alarm” days).

Of course, all this doesn’t suddenly make it a great album. It simply means that perhaps now, with more than 100 minutes of material from Minaj in six months, the format becomes largely irrelevant and one can start to just judge the music song by song. So we shall primarily focus on the eight new songs, and then see if Minaj can convince you to part with your hard earned cash. One would hope that these eight tracks would bring a touch more artistic freedom than the original set — which was a tightly wound collection of potential singles — and things get off to a solid start. “Up In Flames” builds slowly, and the MC kicks in after a minute over a slow, heavy and melodramatic beat, throwing out a relentless slew of barbs (not Barbz). Followed by the most recent single, “Freedom,” we find her mixing arrogance with introspection, plus a subtle but effective chorus. It’s not really much of a single, more like precisely the kind of album track that was missing the first time round.

“Hell Yeah” featuring Parker is a bizarre song that doesn’t really seem to function on any level, with a disconnected throwback beat and a dull chorus. Lil Wayne makes his customary appearance (didn’t he quit rap to focus on skateboarding or something?) on “High School” — again, it’s another song that doesn’t really cut it, certainly not comparing to “Roman Reloaded” (the song featuring Weezy), with an overall feeling of malaise afflicting the proceedings. “I’m Legit” brings back the brash, crazy Nicki (or Roman) spitting some pretty ridiculous flows that dovetail beautifully with the stuttering beat, and it is a pure audio assault on your eardrums, assisted by Ciara on a decent but somewhat fussy chorus. The hilariously titled “I Endorse These Strippers” feels like a lesser sequel to “Beez in the Trap”. This time, Tyga replaces (thank goodness) 2 Chainz, and Thomas Brinx does a good job too (whoever he may be). It’s a fun song with a possibly limited shelf life, but it’s still worth including. “The Boys” is a duet with Cassie, and is probably the biggest single driving force of the “Re-Up” set: it’s a cracking tune, with a catchy yet challenging chorus, a well-worked concept/video and it’s cheeky enough to raise a smile. Last up, the only number reminiscent of the pop/dance elements, the Dr Luke produced “Va Va Voom” (which recalls “Where Them Girls At”). It works well, and is the other big hit to surface from “The Re-Up.”

It’s relatively clear how “The Re-Up” is divvied up: two proper album cuts, two throwaway numbers, two solid songs, and two hit singles. It really is as simple as that, so when you add them to the original collection, you genuinely have the makings of a particularly listenable album. It’s not a classic, it’s not an artistically genial wonder — it’s just an enjoyable collection of songs. For me, this now makes the whole thing — once I’ve aggressively cut out the fat and sequenced it properly — to be about an hour worth of quality, with just a bunch of fun songs, singles, album cuts, futuristic hip hop and dance tunes. It is most definitely worth your time, money and investment and whilst the “Re-Up” section isn’t particularly mind-blowing, it is definitely an intelligent addition that rectifies certain initial errors. In the end, Nicki Minaj isn’t trying to save the world, she is simply trying to entertain us, and the time to underestimate her has long since gone.