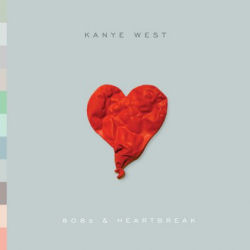 Well, he certainly knows how to keep things interesting. With his College-themed album sequence prematurely aborted – his fourth album was meant to be the ridiculously-titled “Good Ass Job” – Kanye West has given hip hop the slip for a minute, all in aid of putting out one of the most cathartic albums in recent memory, “808’s & Heartbreak.” His last effort, “Graduation,” cemented his place at the top of the rap world – despite being pretty average (how can an album be deemed a genuine “classic” if not ONE review gave it full marks?? LOL). But in the months after its’ release, his mother died due to complications arising from cosmetic surgery. Then he separated from his long-term fiancÃ©e, and that provides the spine to “808’s” – alongside a couple of vaguely interesting other themes (loneliness, guilt, emptiness). So… Do you want the good news or the bad news first?

The good, you say? Well, as you may already know, Mr. West sings for virtually the entirety of “808’s” – a pretty big statement for someone that is one of the biggest hip hop artists in the world right now. It isn’t au natural, however, as he uses Auto-tune throughout. Yes, this is still the “good news” section – the Auto-tune, like a period-piece nude scene, is tastefully done throughout. In fact, after you’ve listened to the album a few times, you start to wonder what all the fuss was about – plus it is used intelligently, in order to highlight particular anxieties or moments of tension. Musically, there are melodies to burn, especially in the first half of the album. From the opening strands of the haunting “Hey-hey-hey-hey” of “Say You Will” to the ultra-catchy “Heartless,” there are moments that will stay lodged in your head for a good while. Other moments that will initially impress include the Young Jeezy feature on “Amazing,” and parts of the fun 1980’s throwback of “Paranoid.” Kanye also gives glimpses of his somewhat fragile mindstate, and that is sure to delight his legions of diehard fans.

Now for the bad. Well, it is a radical departure for West – similar in a way to Radiohead on their fourth LP “Kid A.” That threw a curve ball for everyone (with most taking a while to really get it), but they earned the right to do it – after all, they had put out “OK Computer” as their third, and it turned out to be one of the Top 10 albums of ALL time, any genre. “Graduation” certainly wasn’t, Grammy or no Grammy, even if it was popular. Yet, that is perhaps irrelevant, as Kanye obviously NEEDED to make this album – he has had a tumultuous year, and the desire to get things off his chest clearly outweighed any cunning. This move away from hip hop is not a bad thing in itself – not at all. In fact, in pure terms this is West’s most honest release yet. The problem is that it just isn’t that great.

As far as his singing goes, it seems to have deteriorated drastically – when I saw him live in London back at the start of 2006 (promoting “Late Registration”), his natural singing voice was REALLY GOOD. Anyone that saw his embarrassing performance of â€œLove Lockdownâ€ at the EMA’s a few weeks back should testify that it was vocally appalling. Auto-tune or not, you need to have some confidence to sing throughout an LP – even if it is singing about not having any confidence. It detracts greatly from the potential impact of “808’s.” Musically, the soundscape is barren, full of space and minimalism, influenced greatly by fused elements of British and French music from the last decade. The 808 drum patterns actually tend to work wonderfully for the most part, and there is a reason why hip hop just can’t seem to let go of that particular drum kit. However, even break-up albums tend to have moments of sweetness, tenderness and musical magic – none of that is apparent here. Take, for example, the lush-sounding “Street Lights” – on the surface, an epic to rival U2 or Coldplay (all it needs is a stop-motion video and placement in a corporate advertising campaign). But scratch a little deeper and there is nothing there, nothing to really connect with – sure, he sounds broken as he softly sings “Life’s just not fair,” but it doesn’t connect. He does make that point at certain junctures of “808’s” – like where he compares to vacuous nature of his life to a friend with an actual family on “Welcome to Heartbreak” and “Pinocchio Story.” Commendable, sure, but something is amiss. If he had channeled the blood and sweat of the awful “See You in My Nightmares” (featuring a useless Lil Wayne), or the kinetic energy of the cynical “Robocop” into the whole album, there would be real tension (the good kind).

All respect should go the Kanye West and his fearlessness for making “808’s & Heartbreaks” – there are very few artists in the world (especially in hip hop) that would even have attempted to craft such an album. But that is the point – it feels crafted. Whilst the source of the sadness is real, the end result ends up feeling empty. Even if that is his state of mind, it makes for limited listening. The only song on “808’s” that feels real to me is “Coldest Winter” which deals with the death of his mother, and his part in her death (in a similar vein to when Jay-Z said “My nephew died in the car I bought him”). I’m not even going to go into the way that 50 Cent has cleverly baited West, saying that this is really T-Pain’s album, or the many apparent reports of disgusted hip hop fans disowning Kanye. None of that feels relevant, since this is the odyssey of one man and his attempt to turn a bad year into a good album.

Nobody else seems to have picked up on this, but “808’s” essentially feels like Kanye West doing his own version of Amy Winehouse’s “Back to Black” – an album that has become a cultural and musical phenomenon. But at no point on her LP does all the heartache feel disingenuous, as she pours every teardrop into creating five or six legendary songs. The rest of the album isn’t even all that, but those peaks have helped create magic – yes, she’s crazy, a nut job drama queen, but she created undeniable magic. Kanye West never comes close to approaching real and true magic on “808’s & Heartbreak,” and that is the most important issue. Why? Simply in musical and vocal terms, it feels too limited, mainly due to him over-thinking things – and if that is a reflection of his state of mind, it goes to prove that whatever is going on in his head isn’t very interesting after all. All in all, this is an admirable attempt at an honest break-up album, but an incredibly average one.