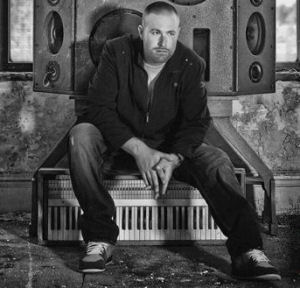 In the past year Big Stat’s music has been featured on the hit show CSI, he’s had a video of him freestyling with Method Man blow up on the internet, and he’s appeared on Late Night with Jimmy Fallon. Don’t call him an overnight success, though. That is, unless you’re counting nearly a decade of hard work as “overnight.” Big Stat has sacrificed a lot to get to where he is today, but as his current mixtape title states, he’s paid his dues, and his time is now.

Paid My Dues is the latest, and most complete, release from Big Stat, who has seen himself grow as an artist over the years, and over the many long drives to network and make himself known. He’s toured with the likes of Method Man, Redman, Raekwon, and Ghostface Killah, and he’s been backstage at practically every venue you can think of. Now it’s finally time for the Enfield, CT native to be front and center, and this week RapReviews caught up with him to find out more about the arduous process of paying one’s dues in hip-hop, the art of the hustle, and the positive things he’s been doing, and plans on continuing to do, with his music.

Adam Bernard: The new mixtape is Paid My Dues. The first thing I notice is that the title is in the past tense. Why did you feel now is the time you can finally say you’ve paid your dues?

Big Stat: I feel like I’ve paid my dues because I’m at a turning point in my career where I can look back and say I’ve already left an imprint, I’ve accomplished more than I ever expected I’d accomplish, and I’m still goin. I have a solid foundation.

AB: With all the dues you’ve paid, what was the most difficult one? What took the most time, or caused the most pain, getting through?

BS: The most time consuming thing I’ve done was going backstage to all these shows, and sacrificing all this sleep, to network, to meet all the people I’ve met over the years.

AB: When you say “going backstage to all these shows” I know what you’re talking about, but for the people who don’t know you, you just got rid of a car with how many miles on it?

BS: {*laughs*} I had 250,000 miles on it. It had 80,000 when I got it. If I found out there was a show in Philly and I had to work the next morning, I would drive down to Philly, wouldn’t know anybody at the show, either bang on the back door until someone answered, or wait outside until somebody from the artist’s camp came outside. I’d BS em a little bit, end up backstage, and network.

AB: What was the best banging on the door experience you had?

BS: I would say one of the coolest ones was going to the Hartford Civic Center and sneaking backstage at one of 93.7’s concerts and as soon as I got back there Akon hopped out his car and recognized me and brought me back with him. I’ve been cool with him since before “Locked Up,” when he was on his come up, and we always kept in touch through texting.

AB: So it’s about more than just meeting the artists, it’s staying in touch with them. Social networking has made that seem easier, but how often do you stay in touch through phone calls versus Twitter or Facebook?

BS: There are certain artists like Redman, and Method Man, I always keep in touch with through the phone. Managers I’m always on the text with, but most of the time, to be honest with you, it’s Gmail chat.

AB: You’re had a lot of great backstage experiences, but what was the worst, like you drove and drove and you got there and it was like “why did I waste my time?”

BS: Oh there’s so many of those. I’d drive all the way down into New York, and then the show would get canceled, or I’d end up not getting backstage and have to turn around and go home.

AB: And that’s at least four and half hours round trip.

AB: Do you think you could have afforded to do that if your career had started today instead of a decade ago?

BS: Absolutely not. There were times back then when I was spending $600 a month on gas. I’ve driven to Miami, Canada, everywhere, just grinding it out, selling CDs out the trunk, and sneaking backstage.

AB: Moving back to the music, when you listen to Paid My Dues, in what ways do you feel you’ve grown as an artist?

AB: You say you’ve found the point you’re trying to get across. With that in mind, when people listen to Paid My Dues, what do you hope they get out of it?

BS: I hope they get a breath of fresh air. It’s so well rounded. It has the punch lines, it has the lyrical stuff, and it’s motivational, too. A lot of fans have been hitting me up saying they’ll wake up and put the intro on and it gets them all pumped up for the day. It’s in your face stuff that you can relate to.

AB: Paid My Dues is a precursor to an official album release. What can you tell us about that project?

BS: I’m still doing tracks for Heart of a Lion. I’m like 3/4 of the way done, but I really want a budget behind me. I want a situation so I can get distribution before I drop that, so right now what I’m doing with Paid My Dues, and I’m probably going to drop another mixtape before Heart of a Lion, is I’m building that buzz up, and building the anticipation for the album, building the fan base up. My goal right now is to get signed to a booking agency so I can get back on the road and pay the bills.

AB: One of the people you’ve toured with is Method Man, and I know you now have a close friendship with him. Give me a funny story, a human story, from all your time spent hanging out with Meth.

BS: One of the best stories that personally hit me, and made me feel like I was official as an artist, was when I was chillin with him in a hotel room in New Haven and he didn’t even know I rhymed. We were chillin, and we were drinkin, and he was playing me some beats that one of his producers did for his album, and I just started rappin. He was like “what the fuck? Stat is an emcee!” This wasn’t even that long ago, it was like four years ago. His head was spinnin. He called his manager, Seven, in the room and was like “spit for Seven,” and he was like “yo, Stat’s an emcee!” That made me put my chest out a little bit, like alright, I need to start taking this a little more seriously. Another time he had called me, I got a call from a +420 number, or something like that, I had no clue who it was. He was in, I think, Czechoslovakia, and he was filming Red Tails, and he called me because he was just chillin. He racked up his phone bill, but he was like “I don’t care, it’s been a while since we’d talked.” The latest, when I dropped that video with him, the Marriott cypher, he called me right after I’d dropped it and he was like “yo, you ate me up on that verse.” I was like “what? You’re crazy.” He’s like “nah, I already got a fan base, people don’t know you, but if both of our verses were on a song you ate me up.”

AB: Moving from freestyling to songwriting, you wrote a very open and personal song about your mother, and her murder, titled “Pain.” You used that song to raise awareness and worked with some women’s groups. How did that go?

BS: “Pain” was a tribute I did to my mother, who had been murdered when I was 12 years old, and that song was my closure to the situation. I (still) think about it every day, but after recording that song it made me feel better about the whole situation. I started out by going on Hot 93.7 and Fox News and raising awareness. The Domestic Violence Coalition reached out and we did a benefit for a couple families that were in need. We did that last year. I got a text from the producer at CSI a couple months ago and that song just went on an episode of CSI last month.

AB: Having seen what you seen, and lived through what you’ve lived through, when you see something like, and I’m just using these two as an example, Rihanna going back to Chris Brown, what do you think?

BS: Me, personally, when a chapter’s closed in my life it’s closed, I don’t go back to it, so if I was in her shoes I would never do that, but I understand why she does it, because it brings closure to the situation, and it’s gotta be hard with all the media hype around it. I think what she’s doing is forgiving, which is huge in life when you have a situation that she went through. To be able to forgive, whether you ever talk to that person again, or not, it’s important to forgive, otherwise you’re going to have all that weight on your shoulders for the rest of your life.

AB: To end things on a much more positive note, what are you most proud of in regards to your career?

BS: I think one of my career highlights was this year when I freestyled on (Late Night with) Jimmy Fallon. That was one of my career highlights because it was one of the biggest challenges for me. I used to freestyle growing up, but I slowed down as I got older and got more into writing. When I got that phone call I took advantage of the opportunity and went there and did it. When I sat in the crowd, those words that they gave me, I had no way to know what they were, there was no preparation at all. It was a huge challenge and I pushed myself to do it, and I did it, and it turned out well and I got a lot of new fans out of it. It was fun, too.

AB: And you made a fan out of Regis Philbin!

BS: {laughs} That was the most amazing thing. When your grandpa calls you and he’s like “Regis shouted you out?” That’s crazy. A whole different generation. When I was sitting in the crowd I heard that Regis was on the show so in the back of my head I knew I had to drop his name in the middle of the freestyle and give it that little extra punch. That was the most surreal moment in my whole career. All of the other things – the grinding, meeting these people, getting the respect – I worked for. That right there (with Regis) was totally unexpected, and I was sitting in the crowd when he said my name and I’m looking to the side of me like me, “what?” That was a surreal moment. It was really cool.