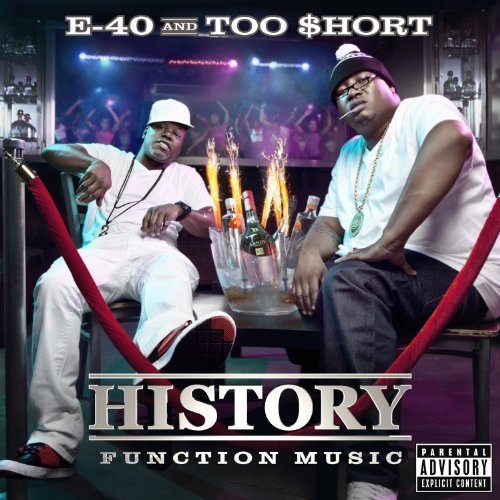 History? Whatever rappers claim they did, Todd Shaw and Earl Stevens probably did it for real, they been doing it for the longest, and it looks like they’ll do it much longer even. The legacy of these two simply goes beyond the comprehension of today’s rap clientele, and even longtime observers will struggle to put their combined achievements into perspective. But it isn’t really mandatory that we delve too deeply into the amount of history we’re dealing with here, since the title is a truncated version of the originally announced “The History Channel” anyway.

The double feature is divided into “Mob Music” and “Function Music.” ‘Function music’ is a recently popularized term that describes the more energetic and exuberant party rap made in the Bay Area (hyphy, for instance), while ‘mob music’ is typically applied to the more slow and sinister NorCal sound of the mid ’80s to mid ’90s. But while Too $hort and E-40 have at certain points been associated with specific styles or subgenres, more than anything they’re two of rap music’s longest standing soldiers.

Still there are expectations to meet and on “Function Music” the vets approach them head-on with songs the kind of which they delivered already in abundance. There could have been a chance that “Workin’ That Trunk” reminisces on the days when they laid the foundation for their careers by selling tapes out the trunks of their cars (in the vein of their ’98 duet “From the Ground Up”), instead it’s another analogy that combines adult amusement and the world of transporation, the album’s second after “Dump Truck.”

Too $hort in particular has been rhyming about the female species since the aforementioned tapes. That’s not even worth discussing unless you’re analyzing his entire body of work. Regarding the dynamics of this duo suffice it to say that Too $hort’s descriptions are almost always egocentric while E-40 likes to develop characters from a distance. On “Singles” Short Dog jokes, “I give back to the community / tippin’ strippers ain’t new to me.” 40 Water meanwhile characterizes a stripper as having “more game than a nigga, she make six figures.”

Despite these differences they find plenty of common ground. “Function Music” cultivates the terrain between parking lot and dance floor extensively. From the minimalistic mack fest “Slide Through” to the nocturnal ode to the bad bitch, “Let Me See You Twerk,” again and again we find them commentating and complimenting the characteristics of some imagined lady. These tracks are functional in the very sense of the word, they serve no greater purpose than to prove that these two rappers were not only born to mack, they’ll likely die macking. And to remind us that we’re dealing with hall of gamers, Pomona pimp Suga Free shows up on “One Foot” while “Check That Bitch” promises that “it’s never too late to learn the game” – provided you have mentors like E-Feezy and Shorty the Pimp.

Something would also be missing if there were no business tips on this album. “There’s enough money out there for all of us to have / but suckers don’t wanna see other brothers get cash,” 40 offers on “Bout My Money,” which with the help of Rick Rock on the beat and Jeremih on the hook turns into one of the more memorable tracks. On “Entrepreneur” they reclaim their status as hip-hop’s original players in the economic sense. $hort also remains remarkably consistent with his closing advice to get out of the dope game.

Both rappers don’t fail to mention the influence their music and Bay Area rap in general had. Ironically two of the songs where they do so fall flat, “West Coast Shit” with its simplistic beat and dated Ice Cube cameo, and “Cali,” a dissapointing album finale that begins with Bosko mimicking Roger’s “California Love” hook and ends with two no-name features. Thankfully opener “This Shit Pound” gets it right early on as the official weigh-in that confirms the heavyweight status of this tag team. Later on superstar Wiz Khalifa pays his respects on one of the album’s highlights, “Say I,” living proof of $hort’s boast “Our shit been poundin’ all yo life / Most of y’all niggas, we raised y’all right.”

With the “Revenue Retrievin'” and “The Block Brochure” series E-40 has trained his audience to accept overloaded collections of new music. “History” relies heavily on his infrastructure (label, producers, Stresmatic for hooks, etc.). He makes every effort to turn this into an equal partnership, and yet at least “Function Music” feels like one of his records. Still E-40’s senior by several years, Too $hort apparently doesn’t mind, summing up “History: Function Music” with a simple but apt “We havin’ fun on this album.”