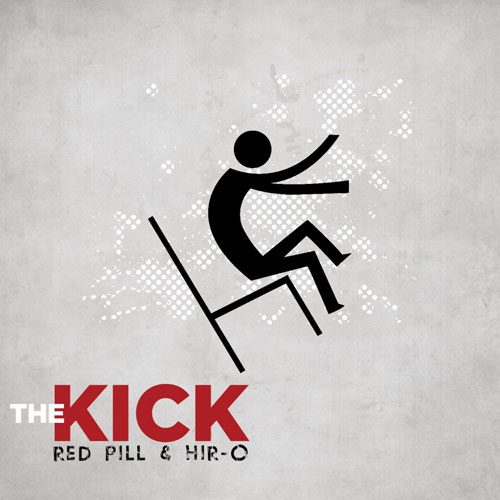 Hopefully this won’t come across as arrogant – actually, I couldn’t care less – but I know next to nothing about Red Pill or Hir-O. Here’s what managed to get through into my brain: there are two of them; one’s an MC, one’s the producer; one is black, one is white (no idea which is which, couldn’t care less either); they are from somewhere in America; one’s an MC – ok, I’ve used that already. I’m out. That’s all I know. Shoot me.

The thing is, who really cares? You see, having had an advance copy of “The Kick” for quite some time now, it really doesn’t matter that much. Having listened to it – a lot, it must be said – I care EVEN LESS about the superficial details… The underground rap game is a damn hard hustle: you need a watertight bio, co-signs aplenty, clever videos, be a brilliant networker… But as a fan, you just need someone you trust to say: “Hey, I really think you’ll like this.” Word of mouth trumps marketing hype almost every time. And that’s also where much maligned rap critics can be of some use. Well, dear Reader, you and I are friends, right? Okay. Well, I think you might like “The Kick” quite a lot. This is that real “RapReviews Sound” (if there is one) – and the artists themselves have succeeded in making an arrogant bastard from London actually give a shit about them.

My ignorance has been assisted by the fact that when you type “Red Pill” into Google, you basically get a bunch of fan sites for “The Matrix” (true story). But I’m pretty sure he’s the rapper, and he comes from Detroit. He’s also an excellent lyricist: even if the flow takes some getting used to, and the delivery initially seems a touch reticent, Red Pill will really grow on you. Some of the verses are top notch, and songs like “Waiting On A Train” are quite superb. “One Simple Idea” is a brilliant instrumental to lead with, too (the kind that betters most of “Food & Liquor II”). The title track has a wonderful live feel to it, with other first half highlights including the soulful “Half-Remembered Dream” and thoughtful “Architect.”

The second half of this fourteen-track offering is a touch more variable: “Hir-O Told Me” doesn’t really fit the tone of the project; and “Michigan” is a touch too saccharin for my taste buds. However, “The Second Kick” works well; “Simple Words” is incredible, brimming with the kind of emotional self-analysis that has long been shunned by too many underground acts. “Best Rapper” is one of the more typical numbers you’d expect, a trash-talking bragfest featuring Ras Kente and a damn fine outro.

All in all, the majority of “The Kick” works really well, driven by varied production from Hir-O and skilled penmanship from Red Pill. His style takes a while to get accustomed to, but it’s definitely worth the wait. Even if they do fall into a couple of traps (are apologist songs like “We Are Not Like Them” really necessary nowadays?) you’ll find much to delve into wholeheartedly, and you won’t care about the superficial details – the beats, rhymes and life prevail above all. As they should.