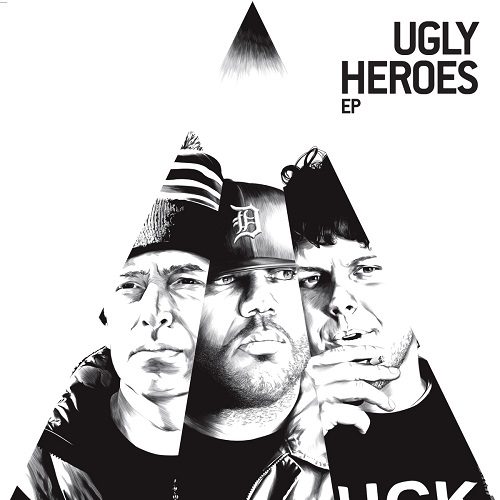 One of the biggest surprises from 2013 was the Apollo Brown-led trio called the Ugly Heroes. After collaborating with several legends (O.C. and Ghostface to name a few), Brown decided to recruit a pair of lesser-known emcees for a group. Red Pill (out of Detroit) and Verbal Kent (from the north side of Chicago) stole the show on the group’s eponymous debut LP with their blue-collar raps over Apollo Brown’s mid-tempo, head-nodding beats. While Brown further cements himself as one of the most consistent beat makers in hip hop, the two rappers continue to improve as writers and performers on their latest release, “Ugly Heroes EP.”

“Ugly Heroes EP” is a 5-track EP (with five previously released bonus tracks) to promote the up-and-coming group before they tour Europe for the second time. The first five songs on the project show all three members tightening up their craft. Apollo Brown has been tip-toeing the line of consistency and monotony for a while now, but he plays with enough different styles and sounds (particularly with the bluesy guitar on “Risk Brings Reward” and the closer “Michael & Scottie & Horace” and the bonus cuts “Me” and “Pay Attention”) to keep things interesting. And it also helps that even if his beats tend to sound similar, they’re all dope.

Verbal Kent made a lot of strides on the EP, as he has noticeably improved his writing and focuses more on subject matter. Earlier in 2014, Kent released “Sound of the Weapon,” which was very heavy on Verb Kent’s excellent battle raps. But the stand out tracks on that record – namely the title track and the three-part “Now or Never” – showed a more personal side of Kent’s rapping. And he continues to focus on that more on this EP on tracks like the excellent “Legit Worthless” and “Risk Brings Reward.”

Red Pill continues to be one of my favorite rappers, and he’s getting better with every release I’ve heard him on. On this EP he attacks every verse with more aggression and seems to be finding his voice more as an emcee. Pill continues to be the more introspective voice of the group (as Kent is the more punchline-centric rapper), and few rappers execute the “everyman raps” more effectively. On the EP’s opening track, he delivers one of his best verses to date, with the energy and hunger of an underground rapper on the cusp of breaking through to the next level:

“I was just a rapper up in Michigan State
Working at Quiznos, serving Mr. Izzo
Working on my rhymes, with a full-time job
Go to school full-time – that’s three full-time jobs”

Apollo Brown recently announced a new project with Ras Kass, titled “Blasphemy,” that is supposed to drop at the end of October. “Blasphemy” is sure to be yet another excellent release to add to Brown’s already impressive resume. Brown’s projects with already established emcees are great because he often inspires excellent performances from rappers whom haven’t released a great project in several years (most notably OC and Guilty Simpson). I suspect Brown’s album with the West Coast spitter will be Ras Kass’s best in years as well. But I think Apollo Brown is at his best when he is nurturing young talent like Verbal Kent and Red Pill, and I would consider the two Ugly Heroes projects among his top releases. I hope these three continue to work together because they have the potential to be one of hip hop’s best groups.