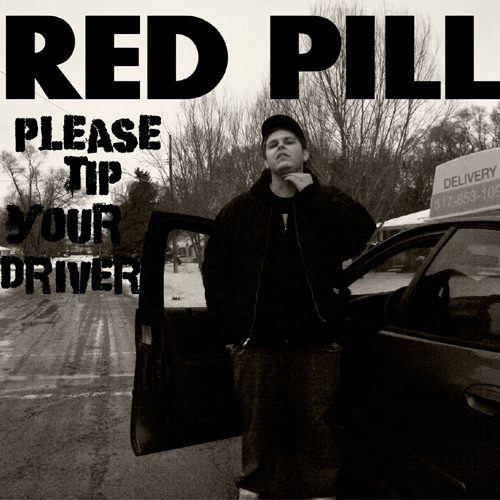 Want to know how deep the rabbit hole goes? You already know how to do it – you take the red pill. If you were born yesterday this might not make sense, so without trying to steal Laurence Fishburne’s shine, here’s a brief synopsis for the know-nots: the life you’re living may be an illusion you’re not even aware of. In the blockbuster science film “The Matrix” the protagonist Neo has two choices – take the blue pill and accept the illusion, or take the red and dissolve the illusion to discover reality. East Lansing, Michigan native Red Pill is already awake and holds no illusions about the real world – he delivers sandwiches by day and struggles as a rap artist by night. “Please Tip Your Driver” isn’t just the title of his album, it’s his advice to hungry Michigan State students getting their footlong subs from him – don’t be a cheapass.

Red Pill is taking a unique approach to distributing his debut album, letting visitors to Black Milk out to make a name and more mainstream rappers like Slug who already have but still exist in a blue pill form to 98% of pop culture. While none of the above will ever wake up 100% of the Taylor Swift & Ke$ha audience they at least have the potential to convert 50% or more of the Eminem & Ludacris one. The latter two already bust funny and personal rhymes, and Red Pill’s no different. Take this excerpt from the title track for example:

“I need a change fast like a model
Can’t go back but my past still follows
It hollowed out my soul, left a hole so big
makes that ozone look like a pothole!
I’m just waitin on the day when it makes sense
But for now I make cents with unpaid rent
Smoke my last cigarette and flick it in the dumpster
Just hope it burns this motherfucker
I’m not goin back there today (nope)
That’s it, I quit, nothin more to say!”

Like so many underground artists these days, Red Pill does his own production on the album, and unlike so many of them his beats are above average. “The Introduction” is not just a skit, it’s a funky bassline with a hip-hop lecture about “having a million hits on MySpace and not knowing who Dilla is.” Pianos and pounding drums make up the backdrop of “Worry About it Later,” an ode to persevering despite your personal doubts. “I Understand” has that cool ass 1970’s Jackson 5 feel – light and airy, soulful and fresh all at the same time. “I Believe” is aggressive enough that Lil’ Fame could believably drop in for a cameo. Red Pill does have a couple of misses though – “Irregular Heart Beats” missed something in the mastering process as the bass distorts so badly you are forced to skip what would otherwise be a dope track. “Dead End Roads” uses cliched “Eddie You Should Know Better” samples that no matter how fresh Curtis Mayfield is have simply been beaten to death in 2010. There’s nothing technically wrong with “YouCanMakeLifeCanMakeYou,” it’s just a little slow and plodding for most listeners.

On the whole Red Pill’s “Please Tip Your Driver” is a stronger debut album than most new artists will have, and honestly exceeds the suggested $5 donation Red Pill mentions on his website and in his press release. There’s only one cameo appearance on the album, meaning for 9 out of 10 tracks you get an unfiltered look at a new and worthwhile voice in hip-hop with a promising future beyond getting people their freaky good sandwiches freaky fast. Take his advice and try the album for yourself – especially if you’ve already been down the rabbit hole and don’t mind waking up to something outside the mainstream.