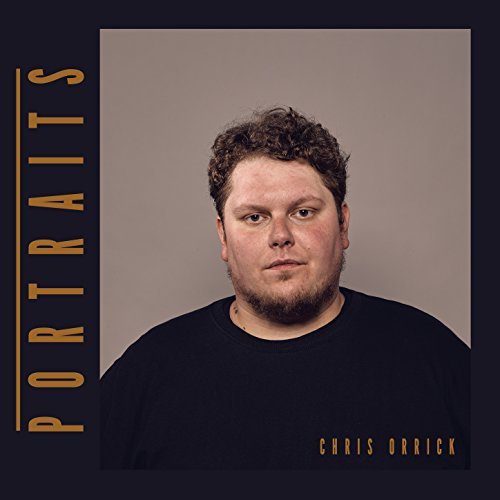 Detroit rapper formerly known as “Red Pill” made a dramatic shift earlier this year. His rap moniker was originally a reference to the infamous “red pill/blue pill” scene from the 1999 sci-fi action film, “The Matrix”. However, online social media participants co-opted the term “red pill” and grossly associated it with some of the worst aspects of the men’s rights movement. Rather than allow any negative connotations to be attached to his person, he has shed that name entirely and now operates under his legal name: Chris Orrick. However, the name change itself wasn’t the dramatic shift I was referring to. It was only the catalyst.

On his previous albums (2016’s “Instinctive Drowning” and 2015’s “Drunk Day” and “Look What This World Did to Us”), he conveyed the image of a man with disregard for both his appearance and health, but rapped like a hip-hop Charles Bukowski with gems of wisdom. His fourth album, “Portraits”, is what hip-hop would sound like if it was made in a smoky blue-collar bar during a long sudden moment of clarity. Listening to this album, it has a certain concept in it: Red Pill is dead and Chris Orrick is the Detroit working class hero who pulls no punches in his raps when it comes to himself and his life. And being himself on this album gives it a significant candor, all of which is imbedded in his commanding flow and compound rhyme schemes.

The production on this 12-track album is varied, but has a consistent use of piano samples and also begins and ends with emcee/producer and fellow Detroit native, Nolan the Ninja behind the boards. He starts the album off with “Self-Portrait”, which is pretty accurate considering Orrick’s lyrics are a self-deprecating self-examination of his psyche. The tongue-in-cheek humor comes when he rhymes, in the third person, about all of the aspects of himself that he despises (from his physical appearance to his taste for both alcohol and cigarettes). The Bruce Wein-helmed “Stories” shows Orrick’s ability to flip hip-hop conventions. When it comes to storytelling in rap, I’m accustomed to its structure being a cinematic narrative with an Aesop fable incorporated within. Orrick turns the idea of hip-hop storytelling on its head by rapping three stories about ordinary working class life with no climax or twists in their respective ends. Though comparable to the kind of everyman stories courtesy of Slug from Atmosphere, Orrick’s take on the idea appears to be partly a sly parody of what a listener expects from rap narratives. “The Rubric”, the title of which may be a nod to his former nom-de-rap, features Verbal Kent. Orrick’s lyrics, “They paint the Rubik’s cube, it’s rigged to make sure you lose / So when you play the game, if it’s all the same, try to play for you”, invoke the idea that “you cannot lose if you do not play” (from HBO’s “The Wire”).

The love song “Lazy Buddies” is produced by Apollo Brown. The production here is his trademark sound: A good ear for sample chops and drum programming with hard snares. Orrick follows a similar lyrical theme on “Mom”, a dedication to his deceased mother and reminiscent of “I Miss You” by DMX. He details his daydreaming of a different life on “Escape Plan”, but he’s at his best lyrically when he takes that track’s concept further on L’Orange’s “Anywhere Instead”. Driven by a gospel piano/vocal sample and thumping snares, Orrick goes in and explains his name change while giving two middle fingers to his haters.

Another of the album’s production highlights is on “Bottom Feeders”. At first, I thought this was one of Apollo’s beats, but the metal-on-metal snares and sample are all courtesy of Exile. It features Fresno rapper Fashawn. The wordplay from both emcees is on-point as they address classism in society, and I think Fashawn held his own against Orrick’s verse.

The appropriately titled “Barfly” is the best example of my assessment of this album as blue collar hip-hop. It’s bar music that is “open with confessions…and turning scars into weapons.” The one track that has at least some political bent to it is “Jealous of the Sun”. Released as the album’s third single, the lyrics make reference to climate change and return to the details of the rapper’s transition from Red Pill to Chris Orrick. The album comes full circle with “What Happens Next?”, produced by Nolan the Ninja. The album bookends with the same concept of “Self-Portrait”, but with a redirected perspective: The lyrics consist of Orrick describing himself through the point-of-view of a liquor store clerk. Because Orrick is from Detroit and his album contains themes of socioeconomic divide and self-discovery, the term “8 Mile” may come to mind for some listeners. Orrick is far from his city’s most famous hip-hop artist, and there is no need for comparisons. “Portraits” is lyrically good without being over-the-top and the production fits its concept. An introspective and personal album, “Portraits” is pieces of a Detroit blue collar man who expresses himself well through the art of rap.