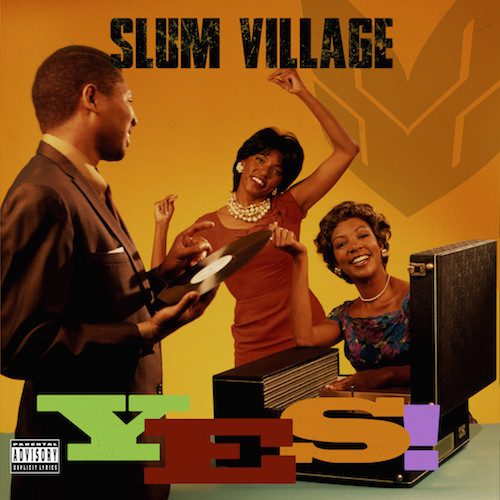 It’s hard to believe that next year marks a full decade since the great J Dilla passed away, and while it’s been even longer since J Dilla was a part of Slum Village, his name and style of production are synonymous with the Detroit group. With countless line-up shifts and internal conflicts between members, it’s good to hear “Yes!” sounds as good as it should do. Arguably their best work since “Fantastic Vol. 2”, T3 and Young RJ have assembled a soulful album that stands out in 2015, as (excluding “To Pimp a Butterfly”) there aren’t many records still being made with this style of Hip-Hop Soul.

Slum Village have never been lyrical geniuses, and little changes on “Yes!”. This isn’t necessarily a bad thing, with “Tear It Down” an inevitable anthem that’ll be used at their live shows. “Love Is” is an irresistible Bilal collaboration that is classic Slum Village, boasting snappy rhymes and a typically brash pair of verses. De La Soul even drop by on “Right Back” which boasts one of the dopest piano loops I’ve heard in a while.

The fact that this album has gone under many radars despite boasting J Dilla production is a little surprising given how Dilla is worshipped by many music fans, both inside and outside of Hip-Hop circles. The instrumentals are a combination of Young RJ and various unearthed Dilla beats – including demos with early vocal performances too. It’s soulful, yet dirty with it, further exemplified by T3 and Baatin’s sexually explicit rhymes, something I’ve always found has given Slum Village a Beatnuts vibe – dope beats, and party raps with sex as a key theme. Sonically, Slum Village couldn’t be further from The Beatnuts, with the Detroit sound emanating from the CD with a blinding glow.

“Yes!” is a good record but is as messy as the group’s past. It’s easy to recommend as the production is addictive and largely accessible, but the rhymes do let the side down. Slum fans will insist that the rhymes aren’t what SV are about, not since Elzhi left anyway, and if you can overlook the reliance on J Dilla and view his legacy as a blessing rather than a curse, there’s plenty to enjoy here.