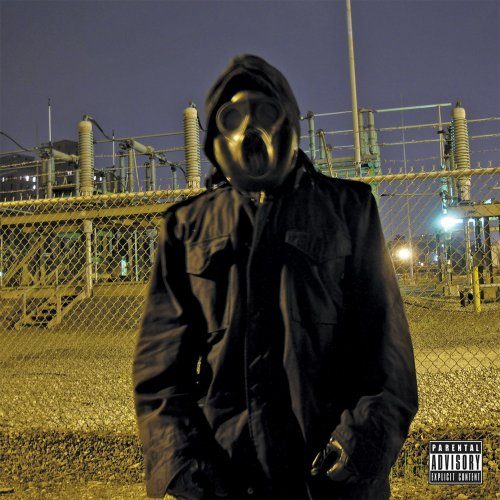 One month after taking on the assignment to cover the latest Twin Perils release “Word Supremacy” myself, their label is back with a solo album from one half of the crew in the form of June Marx. It’s actually coincidental given the Twin Perils review was a bit overdue and this album was undoubtedly being worked on in the lab that whole time, but nevertheless it’s two albums in two months from Holographic Pagoda. On one hand that leaves me uniquely qualified to comment on the Marx solo being already familiar with his work, and on the other it makes me slightly concerned about what I’m in for on this disc. While his partner Lone Ninja was the less charismatic of the duo lyrically, Marx did his own damage as the album’s producer, showing an inability to cut away his less interesting beats and leaving too much mediocrity to digest.

To say “Body of God” is a little more focused is to say two UFC fighters have a one inch reach difference in the length of their arms – it’s technically an advantage to the longer man but one that’s awfully hard to discern in the battle and rarely decisive in the outcome. Asking Lone Ninja to step aside so that he could release a self-produced solo album created that one inch reach advantage, but this is still a flawed disc. As before Marx relies heavily on sounds that are futuristic, militaristic, nihilistic and any other -istic you’d like to apply that encompasses sampling from black and white movies with expired copyright dates. While making war torn and blood soaked battle raps works well for CNN and M.O.P., something’s being lost in translation here. The closet track to getting it right is the aptly named “Natural Selection” because the loud snare, guitar riffs and brash WAH, WAH, WAHHH melody samples fit together naturally. Unfortunately or otherwise they also drown out Marx’ rap completely. “Napalm Clouds” may be a little better overall – it’s not as compelling musically but it’s better mixed and the bars Marx’ spits in the opening verse hold my attention:

“I’ma go right ahead, and ignore your hypocrisy
You should learn to bare and accept you’re not stoppin me
They disregard the truth and ignore the prophesy
When I first found the mic I felt I hit the lottery
Felt it deep inside of me, felt it was my place inside society
Other men was homicides and robberies
I was droppin gems and writin philosophically
The industry, peep the art like they stealin property
It’s all smoke and mirrors in actuality
They package you, then market your personality
And they market your fantasy through the speakers
Youth gladly receive it, lacking true leaders”

Insightful words from Marx, who is definitely the more colorful member of his Twin Perils team vocally, but he too falls into the trap of taking his own words too seriously and often fails to convey true emotion with them. On songs like “The Perilous Path” and “Euphoria” he might as well be reading a script after downing an entire bottle of NyQuil – seemingly listless and ready to take a nap at any given moment. Musical problems are not uncommon either. “Elusive Moments” gets praise for using a sped up loop of Lesley Gore’s “You Don’t Own Me” for the hook (or maybe the Klaus Nomi cover for all I know), but sadly he doesn’t add much to it other than a very simple drum tap, and the guitar and rattle behind the verbal bars is monotonous. “Hadron Collider” sounds like a Jedi Mind Tricks beat that should have been left in the lab until it was finished and suffers doubly from Lone Ninja’s cameo apperance. “Overthrow the Throne” should never have been in the lab in the first place – deleting it would’ve been best.

There are things about June Marx that show potential and promise, and then there are things about him that suggest he might never rise above mediocrity and achieve only a marginal level of underground independent artist fame. It’s hard for me to imagine many of these tracks rocking a live crowd at a club and while that’s not a prerequisite for good music it’s not a bad sign when you can picture 100 to 10,000 or more people jumping up and down to a song. Even the most inane and vapid of Insane Clown Posse’s songs is delivered in an energetic enough fashion that you can feel other people would receive and pass that energy along, whereas Holographic Pagoda releases somehow drain me of energy and make me think of artists who performed while I took a piss break or went to get a Diet Coke. There’s intelligence behind the word and there are some good beats here and there, and on rare occasions they even come together, but “Body of God” has only a one inch reach advantage this time out.