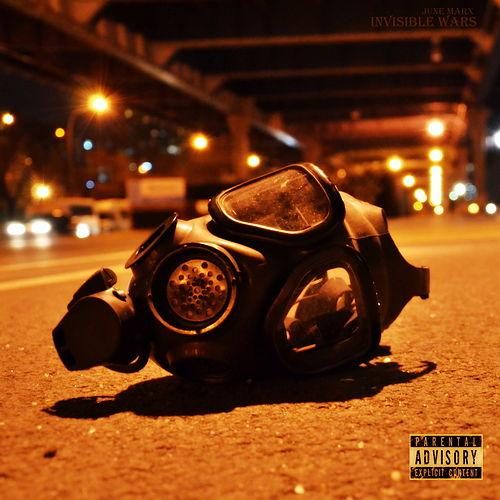 I reviewed a record from June Marx’ colleague and fellow Twin Perils member Lone Ninja last year and wasn’t particularly impressed by his apocalyptic record “Rogue Agent”. June Marx’s fourth album “Invisible Wars” fares a little bit better, but still sounds substandard considering how many records these guys have put out. The beats throughout this album are too loud compared to the vocals, which when you have all the charisma of a wooden spoon, means it can be hard to really take what June is saying seriously. Nevertheless, June Marx is a niche rapper and his lyrics do contain some vaguely interesting themes. “Renaissance Wars” and “Second Renassaince” aren’t just similarly titled songs, but both follow the same formula; dope production, unremarkable rhymes.

You could argue that the whole project is solidly produced, but the likes of “Reign of Fire” and “Code of Conduct” show an unfinished aspect that is mildly irritating. “Code of Conduct” in particular is close to being a gem but the drums are overpowering. Despite some strong production from Marx himself, this record still gives off a cheapness that is unforgivable. Only three tracks reach the three minute mark and every song is unfocussed ramblings that rarely leave you satisfied – more often confused if anything. That’s not to say the album is a complete failure as “Cobra Gunships” shows June can make an impact when he decides to use an instrumental that doesn’t blow him away, applying some adept lyrics to an ominously depressing backdrop that feels like one of those post-apocalyptic animes chock-full of robots.

Heavy production should redeem a forgettable rapper, but it only drowns out June’s subdued presence. Sounding like a blend of Ka and Killah Priest, June Marx chooses to use hard, crashing drums on every track which really doesn’t compliment his rhymes. It’s like hearing Roc Marciano over some Stoupe beats, without the refined artistry of either. Using Ka, Killah Priest and Roc Marciano as examples isn’t a comparison by any means, as “Invisible Wars” is not up to the standard of any of those emcees’ albums. June Marx doesn’t have the listener gripped by his verses, he just gets swept away in a cloud of scenarios that sound cool but never really convince. “Invisible Wars” is an appropriate name for this record, as while there is plenty of raucous behaviour centred on military pursuits and stealth manoeuvres, the image is never fully realised.