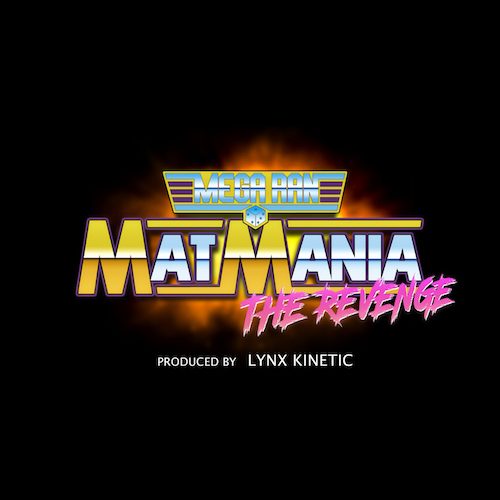 I had to go through and reorganize the database just to be sure (and it’s still possible I missed one or two) but judging by the count this is the THIRTY-FIFTH MEGA RAN ALBUM reviewed on the website. That’s more Random a/k/a Mega Ran releases than there have been editions of WrestleMania, which seems appropriate given what we’re covering today is another of Ran’s wrestling themed albums. If it wasn’t obvious from that release alone, Ran has never made a secret of his love for the grappling arts, and if you followed his Instragram this weekend you saw him chilling with a lot of wrestlers in Orlando. I admit I kinda wish I had been there for the weekend but… Orlando just sucks. No offense if you live there but the roads are horribly laid out, the weather is humid, the traffic is ridiculous, everything is too expensive, and it’s just one big tourist trap. I’ve been there, done that, and LITERALLY bought that t-shirt.

Back to Ran and his partner in crime Lynx Kinetic though — this is “Mat Mania: The Revenge.” And as a worthy sequel to the original I’m happy to see some new faces in the mix, including one of my OTHER favorite pro wrestling rappers who goes by the name R8ed R. You might expect them to be flowing over a Lynx Kinetic remix of a modern wrestler’s theme, but they throwback all the way to the old school and go in over the Legion of Doom (Road Warriors) as Mega Ran incorporates their classic catchphrase “snack on danger and dine on death” into his rap on “WHAT A RUSH!”

Clocking in at just over four minutes long and coming heavy with the percussive thumps, this is an album highlight and a very worthy spot for R8ed R to make a cameo. The only other guest appearance of the entire release is Teek Hall the Villain, who makes the most of his spot on the card as they bust flows to the nWo (that’s the New World Order to you non-wrestling fans) guitar licks on the aptly titled “New World Order.”

That’s the interesting conundrum of the Mega Ran & Lynx Kinetic albums. There’s no attempt to disguise or obfuscate the fact that they are recycling, remixing and reusing the entrance themes of WWE owned intellectual property — yet these albums are slick enough and polished enough they COULD be actual WWE releases. It’s the same kind of area that Ran once fell into with Capcom’s legal department even though they ultimately realized his raps were good for their bottom line and essentially gave him a free pass. I don’t know that WWE has done that here, I have no proof from Ran that he’s got their okay, but either way the album has a clear FOR PROMOTIONAL USE ONLY warning and isn’t available as a physical hard copy. That’s a shame because I’d love to throw this in as a CD and cruise around bumping their interpretation of Finn Balor’s theme.

Sequels have a hard time living up to originals though. “Mat Mania” was a pleasant surprise that overachieved at about 30 minutes long, and this one is a little shorter (22 minutes) and not quite as strong. The bars are “firing on all cylinders” as Ran says on “Spear and Jackhammer,” but Goldberg’s theme doesn’t lend itself well to a hip-hop remix. There was a better chance Shinsuke Nakamura’s would, but I find myself wishing he had rapped over the ACTUAL violins of the entrance, or maybe even the crowd singing along to it as looped in from a NXT Takeover event. It’s a nice idea but the beat just doesn’t hit as hard as Nakamura’s real theme and tha’s a shame.

Overall the positives outweigh the negatives on “Mat Mania: The Revenge.” Positives: it’s FREE, it’s wrestling themed hip-hop, Mega Ran is one of the best (and most prolific) independent rap artists out there, and the two cameo appearances are stellar. Negatives: it’s shorter than the first album and a couple of the reinterpolations just don’t work this time. All in all it’s not unlike WrestleMania 2 — you weren’t as hyped for it as you were for the inaugural WrestleMania but you were still glad that they did it again. Now we just have to wait for “Mat Mania 3” where the irresistible force will surely meet with the immovable object.