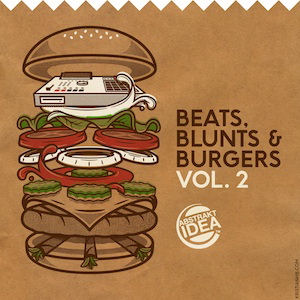 Offered for a limited time as a free download, Lunatick Records is attempting to get the word out on a dope album they feel was slept on. I’ll be the first to admit taking the NyQuil, because before they contacted me about it, I was not aware of Abstrakt Idea’s “Beats, Blunts & Burgers Vol. 2.” If we’re being perfectly honest about it, I wasn’t even aware of “Vol. 1,” and I initially confused the artist in question here with Abstrakt Soundz. Considering both are producer-driven and have “Abstrakt” in their name, it’s not hard to see why. Now if the “Abstract Poetic” Q-Tip had gotten involved in one or both albums, we’d really be in a jar of confusion pickles.

That’s a good segue though because “Beats, Blunts & Burgers Vol. 2” actually has one track that’s not instrumental only – and the rapper from it dates to the Native Tongues era. Hip-Hop legend Sadat X from the Brand Nubian clan can be heard on the 2:49 of “Story to Tell.” It’s not high art from the man formerly known as Derek X, but it’s a nice reminscing track as he looks back at his hip-hop life where “I’ve seen dudes whole careers come and go/drown off of one sin-gle/make a catchy jin-gle and they gone.” Few rappers could pull off rhyming “and go” with “sin-gle” and make it work, but Sadat X has always been unorthdox so he does get away with it.

The other 40 minutes and change of “Triple B” (in my head that sounds like Guy Fieri saying “Triple D”) is an exercise in audio masturbation, but don’t get disturbed by that – picture the opposite sex (or if you swing that way the same sex) performing in front of you to get you hot. Abstrakt Idea is trying to do the same with your ears – okay maybe that IS disturbing, sorry loves. And yet “Bring It Down” is made to entice you – it’s the kind of song you want to hear somebody like Pacewon rapping over. The murky layers of instrumentation come and go, there’s a natural breakdown for a chorus, and the drum track is extra crispy and toe-tapping. “Casino Royale” sounds like it comes from a spy thriller alright, though I’m oddly reminded of Archer. “Hakuna Matata” is not the hippie Disney affair you’d imagine, but it is a laid back bop hat Timon and Pumba could dance to. I’m not sure “Gentle Rain” is all that gentle, but that hi-hat really gets my ears tingling. Abstrakt, you sexy motherâ€¦

ANYWAY you should download “Triple B,” while it’s still free, because this is definitely audio worth paying for.