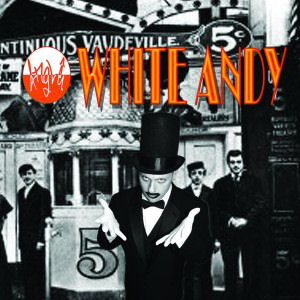 Not intimidated by his first go-around with the RR process, Midwestern rapper Angle is back for a second turn at bat, swinging for the fences with “White Andy.” While the artwork suggests a throwback to the late 19th and early 20th Century, Angle is a thoroughly modern emcee. He’s not going to do a song and dance routine for your amusement. If anything there’s something borderline sinister to his top hat and black lipstick. His hands beckon you to come forward, while his rolled up eyes suggest it’s better to keep a safe distance, and the overall effect is to make him look like hip-hop’s Marilyn Manson.

Songs like “Chinee” play up this sense of danger. The production by Coolzey is highly effective here – equal parts boom bap, orchestra and horror movie that without warning shifts to a piano melody in the second verse. Angle’s vocal tone is well suited to darkness – he’s got a low vocal pitch and a flow that at times is eerily reminiscent of Chali 2na. As for the rhymes, it’s clear that Angle seeks to please himself first, expecting the audience to either get with it or get the fuck on. There’s some genuine swagger to his rap though:

“Bring in the next clown, who says he wants to battle
But no one wants to hear us freestyle – c’mon, skeedaddle!
I’ve lost my zeal for that orphaned old spiel
9 times out of 10, y’all make like a gag reel
at the end of movie with no real comedic appeal
I feel you’re haunted by the ghosts of ideas past
I wish I had a dime for every dozen
that think it’s easy then try and find it wasn’t”

With only seven songs on “White Andy” and 3 tracks featuring guest stars, Angle runs the risk of getting lost in the mix. This is a problem on the posse track “Farns” featuring Felix Thunder, D Average, Toby Diligent, Tremayne, Ryan Nixon, Mic L and Coolzey. Other cameos include The Pleaser on “Abysses” and Tess1 on the Tinkerbot produced “Rocket,” a song on which Angle’s personality shines. His best track may be “Hiyah” though, one for which Angle has released a video that fits his left-of-center personality and vocal styling quite well. It appears to have been shot at a ren faire, complete with fire breathes, a King and Queen in garb, some chain mail bottled booze, and Angle interrupting the whole affair with his hip-hop swag – some of the people bop their heads to it while others stand stoically looking puzzled by his antics.

Angle proclaims himself “a little whackadoodle and I like it that way,” and after hearing his latest effort I’d concur with his own slightly self-deprecating assessment. He’s determined to put his hometown of Des Moines, Iowa on the map and while I was skeptical about his efforts the last time around “White Andy” is a step in the right direction. It may also be a step toward the Minnesotan sound of cats like Rhymesayers, but it works for Angle and his producer Coolzey, so keeping their Iowa originality while adopting the broader sound of underground DIY Midwestern rap is a path they should continue to pursue.