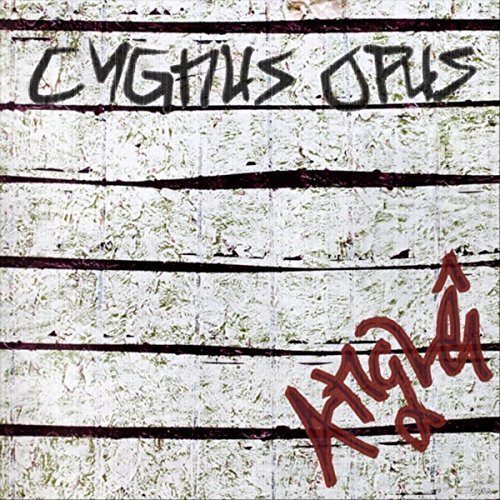 You might think from his name that Angle is related to Kurt, but even in the fictional world of sports entertainment he wouldn’t be a kayfabe brother of Jason Jordan. On the other hand Angle certainly comes from the breeding ground of real wrestlers — Iowa to be exact — nestled firmly between Cyclones to the North and Hawkeyes to the East. Neither the real nor the fake worlds of wrestling are a touchstone for Angle’s raps on “Cygnus Opus,” it just made for something to talk about during the opening paragraph. I’m just being honest with you here.

Honesty is one of the reasons that Angle seeks us out for reviews. I’ve never been overly effusive about his impact on hip-hop although he’s steadily grown from “meh” to pleasantly listenable. Still he’s done that without ever striking a nerve that could take him from the underground Midwest scene to being a major player in hip-hop. To be fair there’s a lot working against him in that regard. Music has been seriously devalued in the last decade given how much of it is given away for free, to the point that royalty points and “units” can now be measured by the amount of plays your track gets on Soundcloud or YouTube. Rather than discouraging hopeful musicians though this has had the exact opposite effect. The level playing field where all digital spins are equal and everybody can produce an album on their laptop puts even more aspiring artists in the mix, watering down the hip-hop broth until it has more in common with Dasani than soup.

One thing you’ll notice right away on “Good Time,” the opening track of Angle’s new album, is that Angle is delving straight into familiar funk refrains in a way that attempts to add more flavor to the stew. Tracks like the Electro Pete produced hometown anthem “DSM” continue that trend, while Angle spits his trademark pseudo-monotone flow. I say “trademark” as if you’d know him, but unless you’re on the scene or have followed him from our previous reviews, that’s probably not the case. It’s a trademark to me though because each time I play something by Angle I’m greeted by a very familiar vocal tone and flow factor that I automatically feel will be divisive to newcomers. His pitch might have slightly more range than the late Keith Elam… but not by much.

Negatives and positives tend to go hand in hand with an Angle release. For many people over an hour of his vocal tone and delivery over 17 tracks might be too much, but the flipside of that equation is that in an era of EP releases and mixtapes this is a fully realized ALBUM and not one that relies on an abundance of guest stars. The “stars” are the instrumental tracks produced by various friends like The Dust Collectors on “Walkabout,” a song with such jazzy fat nastiness I could listen to it sans rap altogether.

As for his lyrical content Angle is once again a mixed bag. He exhibits some tendencies of a punchline rapper, but doesn’t rely on them to the point of becoming a one trick pony. He walks the line between freestyling and telling stories, but doesn’t really grab you as exceptional either way. “Competent” is the word, “compelling” is a tougher sell. Still on songs like “Freak Show” he’s constantly on the verge of reaching that next level as a underground rap wordsmith, although in this case the extra strong bassline has the unintentional effect of making him sound like a beatnik poet.

“For the final scene of the show, the finale needs to build and grow
The magician, the maestro, building a strange crescendo
Bizarre tricks for the mind, sleight of hand, how’d he do that?
I cut that Used to Love H.E.R. right in half
I’m floating, not flowing, grab your soul and levitate you
Make you disappear and reappear in another place, you
can’t deny, there’s nothing up my sleeve, when I pull a gem out of disbelief
Ventriloquist throwing voices on each beat”

If it’s bad to say an album is good without recommending that you need to own it, then you could say this is a “bad” review. I enjoyed songs like “Hold the Door,” “Hot Dog Carbonara” and “Turn This Mutha Out” (featuring Ptate in one of the album’s few cameos) but can’t say my life is any the better or worse for having heard them. This album is quintessentially “okay,” which is also true of most things Angle does. If it seems like damning him with faint praise then let me close on this note — if “mumble rap” makes you mad then Angle would certainly be a refreshing change of pace.