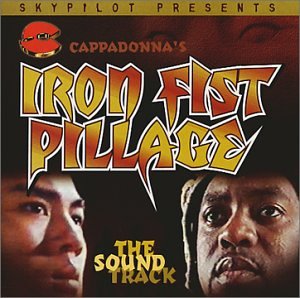 If you’ve been following RapReviews.com for more than a minute or two, you may remember we reviewed Cappadonna’s movie Iron Fist Pillage a few weeks ago. The interesting (and sometimes hilarious) concept behind the film was taking an old Kung-Fu movie and overdubbing it with hip-hop dialogue by Cappa, Steph Lova and others. This CD accompanied the DVD when I got my package from Skypilot Entertainment a few weeks ago, but until now I hadn’t cracked the shrinkwrap on it. Now it’s time to see which is better – the soundtrack, or the movie itself.

Let’s get one thing straight from the outset though – it may be Cappadonna’s movie, and he may be the star of the film, but he doesn’t really have much to do with the actual soundtrack. Six of the sixteen “tracks” are snippets of the dialogue from the film that are from him, but his only appearance on a song is performing the chorus to Othorized F.A.M.’s “Iron First Pillage” title track. Another six of the sixteen songs on the CD, including the previous track, are all performed by the F.A.M. That only leaves four individual tracks and artists on what was ostensibly a “soundtrack” at the outset.

The first of these four tracks is “Why in the Ghetto” by Steph Lova. After blubbering all over the end of the track for a minute, Lova has to tell us, “Shit is all real, this ain’t fabricated, this ain’t some shit I made up – this is real tears!” Up until the point she had to tell us they were real and not fake, I might actually have believed that they were. Then there’s “Big Bang” and “Baseball Cap” by Spill – sing-songy raps that try to combine the folksy charm of Arrested Development’s Speech with the vocal stylings of Tracy Chapman; brilliantly failing at both. Spill and Stylo Dog do provide a decent beat for Son Don Moet on “Big New York” – too bad his vocals aren’t equipped for rap though. He has a whiny voice and terrible rhymes like “please come walk with me, please come talk with me; I disagree, with yo’ pedigree, you better get ready for me.” The only thing you need to get ready after hearing this simplistic rap is a vomit bag.

At this point, you’ll actually be thankful that Othorized F.A.M. dominated the majority of this soundtrack. Their presence, and the fact that four of their tracks are produced by 1.4.0. Productions, is this soundtrack’s only saving grace. 1.4.0. likes violins and big beats, which makes both the title track and the song “Clash of the Titans” tolerable. None of the rappers of the F.A.M. really stand out, but that’s not surprising given that I never heard of them before this CD. They have the sound of a third-string Wu-Tang platoon, with production equivalent to True Master or a throwaway cut from the RZA. Still, it’s better than nothing. The other two F.A.M. tracks, “Killer Hill District” and “Lady Green” are produced by Mizza and Just 1 respectively. Of the two, only the haunting vocals and pianos of the latter manage to command attention – but only for a moment, because the simplistic bassline is too repetitive and eventually a big turn-off.

Bottom line? Between the soundtrack and the movie, the movie wins this battle easily. The movie at least is worth watching more than once for a few good laughs, but there’s nothing funny about this CD unless you find bad rap incredibly amusing. Presented as an EP of Othorized F.A.M. tracks, this MIGHT have been mildly interesting; otherwise it’s just hot garbage.