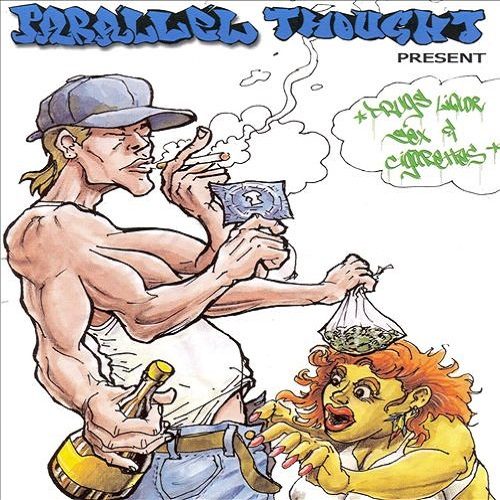 When femcee heavyweight Jean Grae anoints you “the future of hip-hop”, that’s one hell of a cosign. Enter Parallel Thought, an up-and-coming production squad comprised of New Jersey teenagers Knowledge (19), Drum (19), and DJ Apendix Hed (18). Don’t let the wet-inked birth certificates fool you. The group’s gritty sound is a mature, complex fusion of sampling and live instrumentation. You don’t have to take my word for it; Grae, MF Doom, Poison Pen, Pumpkinhead, and Vordul (Cannibal Ox) have all knocked on PT’s door. Three years in the making, “Drugs, Liquor, Sex, and Cigarettes” is the coming out party for the next “it” underground beatsmiths. Who’s whoers Grae, PackFM, MF Grimm, Illogic, Breez Evahflowin, Slug, and C-Rayz Walz provide the lyrical lightning for this PT thunderstorm.

Even though the EP contains only five original tracks, it serves to show PT’s versatility behind the boards. From upbeat (“Freaky”, “Chorus II”) to haunting (“I Wonder”), simplistic (“Stay Sleep”) to layered and evolving (“Don’t Ever Think”), all bases are covered and covered well. To the group’s credit, their production always manages to stay out of the emcee’s way. The problem with a lot of modern production is that the beat is overcooked and drowns out the emcee. It’s like the beat and the emcee are battling each other to be the star of the track. This might not be an issue when your goal is to hatch a club banger, but for heads looking for a lyrical showcase, a quality beat requires enough subtlety to inspire, not outshine, the lyricist. Not only does PT construct hot sounds, they play their position to the fullest, resulting in the ultimate goal: a quality end product. To use a basketball analogy, Tim Duncan may get the headlines, but the Spurs wouldn’t have won the championship without role-player supreme Robert Horry.

“Drugs, Liquor, Sex, and Cigarettes” is really only an appetizer. With a debut full-length expected in fall 2005, the best is yet to come. In the meantime, the PT buzz will be fueled by an upcoming MF Doom single “Vomit”. Heads, keep your ears open because the future has arrived.