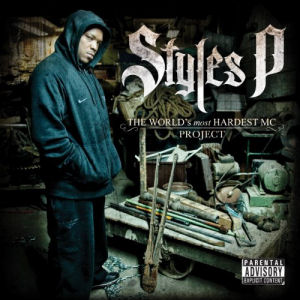 There aren’t many hard-core rappers that still sound hungry after nearly twenty years deep in the game. Many lighten their act up, some go underground and others make rare appearances here and there. It’s fair to say that a lot of hard-core rappers don’t peak as their careers lengthen, but Styles P just seems to get better and better. It’s fair to say Jadakiss was the lyricist that had the most buzz about him when The LOX members went the solo route, I remember buying “Kiss Tha Game Goodbye” the week it came out back in 2001. That album hasn’t aged well, yet the debut effort from Styles P (then going under the name of just Styles) still sounds good today. As each solo album followed, the radio singles were less and less evident as the man born David Styles crafted more intense, angry music, often backed by aggressive piano-led production. “Super Gangster, Extraordinary Gentleman” was a strong record, one that RapReviews’ own Flash enjoyed but felt was formulaic. It’s a formula that has worked though; possibly to even better effect as “softer” rappers clog up the airwaves, Styles P is a refreshing throwback to a bygone era where murder and crime were sure-fire selling points.

“The World’s Most Hardest MC Project” does what it says on the case – hard rhymes over hard beats. There’s nothing as inventive as the clever “Barbara” track that surfaced a few years back, but as far as legit gangsta rap goes you’ll do well to find more authentic artists than Styles. “Araab Styles” is musically reminiscent of Dr Dre albeit more sinister. Crashing pianos, eery horror-flick atmosphere and the subtle humour Styles throws in equals unadulterated madness. Hearing tales of dumping bodies, endless stories of violence and various laws being broken is all well and good for a while but soon becomes boring, surely? But just as a Nintendo game satisfies gamers with its perfected approach to gameplay and the little details that bring a smile to your face, Styles does the same. Hearing him say “I’m a gangsta” in the middle of a verse, as a background adlib lets the listener know that no matter how much gun talk is coming out of P’s mouth, he’s really just having fun with it. Thankfully Styles doesn’t suffer from dreaded seriousitosis, although tracks like “I Know” tread awfully close to clichÃ©. “Like That” is perhaps too experimental musically to fall in line with the rest of the album, but “Monopolizing” exudes an atmosphere perfectly suited to New York crime tales. “Shooter” is ignorant as it gets, guests Snyp and A.P. bringing suitable aggression in spades, but Styles steals the show:

“G’s love me ’cause I rap and they know I’m a shooter
bitches love me, they say I could seduce Medusa
fuck the voodoo lady in the bed, snatch the rooster
kill it then cook it, if you don’t wanna see death
then close your eyes, why the fuck are you lookin’
roll a bucket on while I’m buckin’ the .45
run up in the dope spot like “Fuck it we all die”
Grenade with the pin out, uzi, shotgun
drivin’ like Faster on the wheel for the spinout
the gangsta niggas all celebrate when the win out
my BDS, yeah third lane nigga
your address is in my GPS, you bird brain nigga
my apes in ya house, whatever’s in the safe in ya house
you’re thinkin’ about whilst the tape’s on ya mouth
go ahead live it up, nigga then give it up
if you’re a stick up kid, fuck it I’ll big you up”

“Empire State High” is Styles P at his best, over his trademark sound this time accompanied by Sheek Louch. Truth be told, I was never a fan of Sheek, his on-off rhyme scheme never kept me interested when part of The LOX, and his solo material has failed to inspire like his fellow rhyme partners have. Since Wu Block however, he sounds hungrier than Ryback. The brilliant “Pop Out” is the lead single and comes accompanied with a hilarious video as Styles merges horrorcore with gangsta and raps whilst wielding cleavers and knives:

The problem with “The World’s Most Hardest MC Project” is that the project just isn’t long enough. Eleven tracks long, two of those being Intro/Outro songs at that, it is more a mixtape than anything. If Styles could double the length of this record, bring in some more sinister producers and some of his big name connections such as Busta Rhymes (over this production would be dreamy!), he wouldn’t just have the world’s most hardest MC project, he’d have the world’s most hardest MC back catalog.