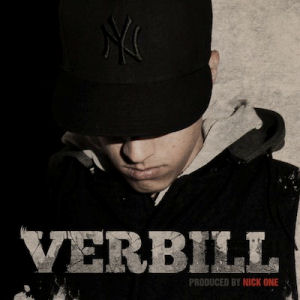 “Why haven’t the hoods replied to me on MySpace?” People stillUSE MySpace? Either way this was the first line that caught my attention on Verbill’s self-titled Australian import. Although he’s fairly new to North America, he’s a long time member of the Aussie rap scene, having won “Best Up And Coming Artist” almost a decade ago at the 2004 Oz Hip Hop Awards. He’s picked up awards and acclaim for his collaborations and mixtapes since then, but like any aspiring rapper who has been around for almost ten years and isn’t as well known as 50 Cent or Kanye West has to want to achieve more. On “Slice” he channels years of hardship and frustration into rhymes:

“Aiyyo I hate to say, that I hate the way, that life’s treating me
But day to day I could take away, this life easily
Yeah! I think about it quite frequently; if I could just
erase my face escape this space and lie peacefully
And not, have to keep dealin with stress
Feelin depressed, if I could just, ease all the tens’
I’d do it in a split sec – why? Cause I’m not impressed
with life or existence – all it fuckin bring is stress
I need to find a place that’s heaven to me
Cause the shit inevitably, it get the better of me
And I can’t seem to get my head straight – yeah
Goin to bed late, then wakin up, with a fuckin headache”

Unless you actually listen to the audio, a little of the impact of Verbill’s performance gets lost in print. The best I can do to clear it up is to point out “erase” sounds more like “e-RAYS” and “can’t” sounds more like “KAUNT.” This is a Brisbane emcee through and through, with the lingual tone any fellow Aussie would immediately pick up on and find familiar, that audiences outside the continent need time to adjust to. The learning curve for Verbill’s vocal tone is not steep though, especially when you compare it to some of his compatriots, which makes him an ideal choice to export to audiences in the U.S. and Europe.

Verbill benefits from the production skills of fellow Brisbane artist Nick One, who both mixes his vocals to come out clear and provides a consistent quality of audio production throughout the release. The mellow five minute long “Everything” featuring Jay (Paua) is both an enjoyable song to kick back and sip a brew to and a very personal narrative to an important woman in his life, although it seems that ship has sailed as Jay is “reminiscing about those days.” Thinking back is also the theme of “Back in the Days,” but before you complain that it’s an overdone theme in rap, Verbill’s honesty about his poor choices (including underage blackout drinking) doesn’t glorify things as better in the past. “Buggin & Illin” has a rugged guitar rock vibe he flows easily to, and he floats lovely on the piano chords of “Burnin.”

The conclusion one quickly comes to after listening to all of Verbill’s self-titled CD is that he and Nick One should become a permanent partnership. Not only are they regionally connected, which makes collaborating much easier than if he chose a producer from overseas, there’s a clear chemistry to the sound and flow of the two working together. Verbill’s career is perhaps not well enough established at this stage to call it “Primo & Guru” or “Pete Rock & CL” but one can at least argue the seeds have been sewn here for a fruitful partnership long term should they choose to pursue it. As a reviewer and as a hip-hop head I look forward to more from them both.