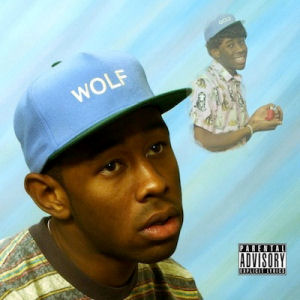 “Knock knock motherfucks it’s me Mr. Clusterfuck
What, when, where, how, like who gives a fuck?
Golf Wang M-O-B, +moppin+ niggaz +Ante Up+
Ain’t been this fuckin sick since brain cancer ate my granny up”

Trying to quantify Tyler Gregory Okonma is an exercise in futility he’d probably rather people other than his therapist not even attempt – except of course he’s his own therapist. That’s a clever gimmick for intros, outros and filler material on his albums but it also hints at a deeper truth – one of the few things about Tyler that can easily be quantified. At times his signature trait has been identified as lyrics that are designed to provoke shocked reactions, but behind the homophobic slurs and rape fantasies is a young man with as much angst as talent. His deep syrupy voice provides an endless array of audio manipulation opportunities, many of which come from his own production – among the best in his Odd Future clique. If you get beyond the shock and awe campaign, he’s quite the narrator and storyteller – splashing lyrical paint on audio canvases in methods that only seem haphazard to the unobservant.

“Wolf” features another of Tyler’s trademarks – raw unrepentant anger – but he’s not loading up full clips and spraying innocent verbal targets. Tyler has a hit list, and when he takes aim, his verbal barbs only hit those who are chosen to deserve it. One of them is his absentee father, and while “Answer” is full of vitriolic language, it’s also a darkly beautiful song where he sings the hooks along with Syd Tha Kid. Tyler outright admits the rage he feels about not getting a positive male role model growing up fueled his artistic success.

“Hey Dad, it’s me! Um…
Oh, I’m Tyler, I think I be, your son
Sorry, I called you the wrong name, see, my brain’s splitting
Dad isn’t your name, see FAGGOT’s a little more fitting
Mom was only twenty when you ain’t have any fucks to spare
You Nigerian fuck! Now I’m stuck with this shitty facial hair
Also stuck with a beautiful home with a case of stairs
So you not being near fuckin fire-started my damn career
But fuck it! I got Clancy he, gave me the chance to see
a world I wasn’t supposed to, I’m stoked that I didn’t know you
But sucks you ain’t give a fuck and considered a sperm donor now
The fuck is an Okonma? I’m changin my shit to Haley…”

Tyler’s personal therapy also includes his escapist fantasies, such as those seen in the three part song “PartyIsntOver/Campfire/Bimmer.” Even though his fame and fortune have risen to the point he could pop champagne in strip clubs like a NBA baller, he waxes poetic about wanting to go to Odd Future summer camp like a Golf Wang Boy Scout. At first you might assume it’s a big put on, but Tyler’s production and the singing children match the dreamlike atmosphere, so he’s not joking – at only 22 he has been aged beyond his years by stardom’s responsibilities.

“All I needed was a stick
Grab the marshmallows motherfuckers gettin lynched and burned
I earned it, my Flog Gnaw badge is lookin good on this brand new jacket
The donuts on the flag wavin over the cabin
Now grab them graham crackers, and pass them over here
Hurry, quickly! I need a piece of Hersheys
Darker than the corners of the bushes we be lurking
I – centered the mellow over the graham
Heated it too long now it’s melting over my hand
Fuck it, I’ll bite it, I burnt it, but I liked it
Camping with my niggaz it’s – so fuckin exciting”

“Bimmer” takes the fantasy in another direction – and while comparing women to cars may be a worn out R. Kelly cliche it seems to have been given fresh life in Tyler’s hands. “This isn’t a song/I just happen to rhyme when I get emo” on “IFHY” (shorthand: “I Fucking Hate You”) shows that’s an unfulfilled fantasy – he can’t cope with his overwhelming need for female companionship in a way the unnamed recipient of his affection might find disturbing. He promises to “lose a couple screws” if she even thinks about leaving, then later admits he’s “passive aggessive for no God damn reason.” Ordinarily you’d think those kind of admissions would call for serious amounts of brain candy by prescription, but Tyler’s medicine is for him to confess his feelings via songs like “Pigs.”

“Bully hand around my neck
Cause he felt disrespected when I decided to talk again
I brought that on myself, see I should know my place
But not at lunchtime, see I know better – than to show my face
around them; but the day I do it will be everywhere
When I share these feelings finally they gon’ fuckin care
Grab a couple friends, start a couple riots
Crash a couple…
Gather all the bullies, crush them motherfuckers
Odd Future hooligans causin up a ruckus”

If you ever wondered how Columbine happens, this is the rage that grows inside teenagers who are picked on by their peers, made to feel awkward and alone and given no outlet for their frustrations. “Wolf” makes me glad that Tyler found his. He admits in the finale of “Pigs” that “I just really wanted somebody to come pay me attention.” Tyler has more than he could have ever hoped for though, which also causes him to rail against album critics, TV reviewers, blogs and even his own peers in songs throughout the album. The turmoil he feels over wanting people to listen then being annoyed when every word gets dissected is not a simple contradiction – it’s a deep schism which provides unlimited fuel for his creativity. The multiple personalities, the “Loiter Squad” TV show, the album artwork, the rhymes are all a result – and who knows what might come next? Maybe a feature film. With friends like Earl Sweatshirt, Frank Ocean and Hodgy Beats at his side, Tyler can tell his story but use other voices to convey the message. That shows just what he’s capable of. Whether he does fast angry raps like “Domo23” or revealing personal songs like “Lone,” his music is never not fascinating. The following words from the album’s finale sum him up best:

“God I wanna quit, but I can’t, cause mother and sister can’t pay the rent
4 stories with storage, I’m 21 with a mortgage
And tourings’ paying the bills, life is paying for thrills
Lifes’ a bitch bruh but from the third floor which is gorgeous
A year ago I was broke, now how can I afford this
I started off with disposables now I have an assortment
And I’m using these negatives to develop a portrait
Now the frame is a pain in the ass…”