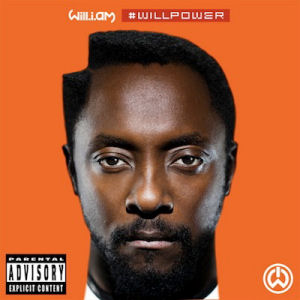 The RR staff recently created a spreadsheet to keep track of all available and upcoming new hip-hop albums, to make it easier for all of us to keep track of what was new that hadn’t been done and to avoid accidentally writing duplicate reviews of the same album. After watching “#willpower” sit on the sheet for a month without anybody volunteering to cover it, I realized that once again I had become a victim of my own circumstance. Nobody wants to write about Gucci Mane albums after I spent so much time badmouthing how awful his lyrics are, and nobody wants to review anything to do with the Black Eyed Peas after I buried “The Beginning” more than six feet beneath the earth. It deserved that treatment then, it still does now, but nobody should be shocked the RR staff wouldn’t willingly sign up for a will.i.am solo album after that – least of all me.

The irony of course is that will’s solo projects aren’t that bad historically speaking. Up until now will has been able to divest himself from the bubblegum electro hip-pop dubstep juggernaut that BEP has become on his own albums. Had he come along in a different era, he’d probably be regarded as being a Native Tongues artist, an eclectic hip-hop poet along the lines of Q-Tip or Mike Gee. I’d even go one step further and say that I respect will as a producer. I may not agree with the artistic choices he makes as part of BEP, but I can’t deny that in or outside that group, he seems to have his pulse on what’s popping in terms of style and sound. You certainly can’t argue with his success – except of course on his solo albums. BEP fans either don’t seem to be aware of them or don’t CARE about them. Despite being some of his most artistic endeavors, they’ve been at best been called “flops” in terms of the amount of units they’ve sold.

And now we arrive at the crossroads where “#willpower” exists – the one where William Adams has to be incredibly frustrated that he’s culturally insignificant as a soloist but hugely in demand as one-fourth of a multi-platinum rap group. What “#willpower” became over time should come as no surprise then, especially since the album was announced as early as 2011 and has been delayed several times. By the time the second single “Scream & Shout” came out in November of 2012, there was little doubt a new will.i.am solo album would be little more than an extension of the BEP electropop juggernaut. The beat by will and Lazy Jay was perfect for the raves will has said inspired BEP’s current sound, and the usage of Britney Spears as a collaborator is the kind of carefully calculated pop ploy designed to get attention. “She’s still around? And she’s doing a rap song?” It gets people talking. Her performance won’t – it’s as devoid of soul as the electronic beat and saying “Britney, bitch” just isn’t shocking.

In fact “#willpower” is essentially at its core a Black Eyed Peas album that gets away with NOTbeing one. It gets to masquerade as a will.i.am solo album, where he gets to do “duets” with all of the most (in)famous pop stars of the day, ones that wouldn’t necessarily fit during the attempts to cram four mundane parts of the Peas into one song, especially when Fergie needs and (as practically the only enjoyable part of their music any more) deserves as much of the spotlight as possible. As such “#thatPower” is a Black Eyed Peas song featuring Justin Bieber (ugh), “Let’s Go” is a BEP song featuring Chris Brown (UGH) and “Freshy” is a BEP song featuring Juicy J – and if you’ve heard “Show Out” insert your own “UGHHH!!!!!” here. At least that song has a hypnotic beat to go along with its retarded chorus about wasting money. The only way that the “yeah hoe” of “Freshy” could hypnotize is if you fell asleep – it’s BORING.

Aside from the moral implications of collaborating with artist like Bieber and Brown, there’s a completely unrepentant attitude toward going as pop as possible that permates “#willpower” to a sickening degree. You will literally get a toothache from listening to sugary sweet songs like “Fall Down” featuring Miley Cyrus (he even raps about soda pop and whipped cream – no kidding) and “Far Away From Home” featuring Nicole Scherzinger. It would be nice to salute the solo songs, but there’s not much good to say about them. “Geekin'” shamelessly tries to adopt chiptune and gamer culture without understanding the first thing about it.

“Ay! I’m on that geek geek!
Freakin’ technology, tech-nique-nique
Yo – I flow tight, never leak leak
I’m the future with a bunch of antique-tiques
I make Google money – that’s a lot of clicks
So tell me who the dummy – and who the gen-i-us?”

I defer to my previous statement in response to his query here. When it comes to knowing what brand of cotton candy will sell best at the state fair, will can work that whip like nobody else. The problem is that it’s all sugar and air, and even if you enjoy it, you’ll never get full from it. There is nothing fulfilling about “#willpower.” It’s hip, it’s slick, it’s polished, and it’s an utter waste of time. will has now managed to bring his solo albums down to the same artistic doldrums his group resides in, with the same vapid lyrics and electro-tech rhythms, which means he’ll finally go platinum on his own at the cost of his soul. At least the Black Eyed Peas “fans” will pay attention, so he’ll be happy, but nobody on staff needed to review this – not even me.