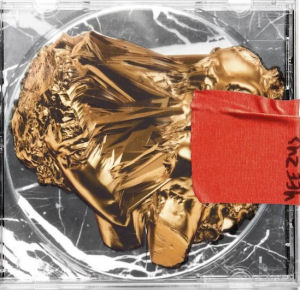 Considering the minimalist ethos that Kanye West has, in so many respects, applied to his new album, it’s ironic just how many bloody words have been written about “Yeezus” thus far. He has released no singles; it’s a short 40 minute blitz through 10 songs; there’s barely any marketing (a la Daft Punk); and the album doesn’t even have traditional artwork. Everything is the polar opposite to his previous solo effort, the completely OTT “My Beautiful Dark Twisted Fantasy.” And yet, there are just soâ€¦ manyâ€¦ WORDS. In the spirit of Mr. West, let’s try to strip this review bare and reduce it.

A lot of critics had already declared “Yeezus” to be album of the year: that was 3 weeks before it even leaked. West has reached a level where he could, to quote that famous boy band, fart on a record and some would still declare it “ground-breaking.” According to Rick Rubin, it wasn’t even finished 5 weeks ago – Kanye shuns his previous process of refinement, endless editing and self-criticism, in favour of just BEING. It was probably a tangle of ideas until Rubin came in to sort it out, and whilst it’s a shame that the legendary producer wasn’t in from the ground up (we’d have a superior album, make no mistake), there are still a few subtle touches of his that remain identifiable. It initially has the air of a college student having left their dissertation untouched until 2 weeks before the deadline. Gladly, however, the more you play “Yeezus” the better it gets.

Vocally and lyrically, this arguably cannot touch the polished and thoughtful extravagance of MBDTF, but it’s more likely meant to be a companion piece to “808’s & Heartbreak” – the screaming production renders this more like “808’s & Headache” for the initial spins, with the first half possessing pounding musical highlights that grab your attention and refuse to let go. “808’s” was designed to make you feel, make you understand West and his various travails; “Yeezus” is a big fuck you to everyone – nothing revolutionary in the slightest, but Ye injecting a bit of punk into this incredibly bland, corporate superstar-driven 2013 can be considered a necessarily evil. Daft Punk deliver with the opening salvo “On Sight” (have you tried just typing “On Sight” into Twitter?); the sparse, thumping track is truncated abruptly by a choir singing “He’ll Give Us What We Really Want” and around it, West spits a venomous intro informing us just how little he gives a fuck. That’s his mission statement for “Yeezus” and next up is the tub-thumping “Black Skinhead” which prompts you to focus on his attitude, not analyse the lyrics (take that as read for 90% of the LP). Snarling “God!” in the outro, it leads into “I Am A God” – a moody and ridiculously OTT song with epically quotable lines (the “croissant” line has already made it into folklore). Another highlight rounds out the opening quartet – “New Slaves” is one of the few songs with political commentary, and it may go down as one of his best. So few other global stars would be able to conceive, let alone get away with, such content.

A bizarre and shape-shifting concoction – “Can’t Hold My Liquor” featuring Chief Keef and Justin Vernon – is a natural successor to “Drunk and Hot Girls,” except this time taking the fluid form of a rambling break-up song. It’s bewildering but enticing at the same time, and certainly works within the format. Again, it displays that not much on “Yeezus” is radically different conceptually to what has come before – it’s just the way West presents it to us that has changed. The second half of the album is more hit and miss: “I’m In It” is extremely explicit with a couple of moments that prove pretty shocking (the civil rights sign line, especially). It’s a quick-quick-slow dancefloor fuck song with varying levels of success, and some typical goofy Ye wordplay (“Swag-hili”). And yet, one can’t shake the feeling that the level of misogyny to which West stoops is reminiscent of Lil Wayne on his recent album “I Am Not A Human Being II” – for someone that is married and has just celebrated the birth of a daughter, one might naturally expect a softening towards the opposite sex through his music. Instead, the opposite rings true and it all too often makes for uncomfortable listening, even if you secretly know that West is just saying it to prompt that exact reaction. On “Welcome to Heartbreak” Yeezy sung about his friend showing pictures of his kids, the report cards of his daughter and so on. Half a decade later, he is now a father – is this his conscious final fling at being that irascible 5 year old, throwing his toys out of the pram and trying so hard to shock everyone all the time?

“Blood On the Leaves” samples Nina Simone (of course, it was Billie Holiday that made “Strange Fruit” so notable) and introduces it to menace of “R U Ready?” by TNGHT. Considering the concept of the song, which surprisingly isn’t political at all, it’s a truly crazy moment that works fantastically well. “Guilt Trip” is another one that doesn’t necessarily match the heights, and pretty much needs saving by Kid Cudi. “Send It Up” bangs pretty damn hard and will no doubt be featured in some club scene in “Girls” Season 3 – notably, it also weighs in at a rare but welcome 93bpm. Finally, another volte face: having plied you with sparse, harsh electronic beats for most of the album, the closing number (and irresistible) “Bound 2” brings back that sweet soul music – it genuinely could have fit on “Late Registration” so you’re brought back to your “reality” sharply.

Until you hit that Repeat button, that is. And therein lies the challenge, as Kanye West throws the gauntlet down to his label, his rivals, himself and us. He likes to pretend that he doesn’t care – but the reality is he cares more than pretty much any other artist out there. I mean fuck, Jay-Z is pimping Samsung for $5m (he is, after all, “a businesssssâ€¦ man”) and cares more about numbers than artistic merit. Carter took Biggie’s idea about “The Black Album” – one that was supposed to be released with all stark black artwork, zero promotion and no second thoughts about airplay for singles – and turned into a orgasmic year-long leaving party, a film, a private jet extravaganza with a relentless assault on the airwaves… Kanye West, on the other hand, has taken Biggie’s idea and actually seen it through – and that’s the principal difference between Jay and Ye. The latter takes art seriously, whereas the former only prioritises art when it suits him. That’s fine, they are extremely different characters and both are necessary to the game. A dozen years later, Jay proves that he’ll “Never Change” as he announces his own album the day before 2 of his protÃ©gÃ©s release their own. It’s a competition to him.

Kanye West, Jay-Z, all of usâ€¦ We’re all fundamentally incapable of change – we can change what we do, but not who we are. (I promised at the start of this review to keep things succinct but you know me too well by now, dear Reader). To Kanye West, this is an expression of who he is, and “Yeezus” proves to be eerie, erratic, erotic. It is by no means perfect, but it’s probably a decent reflection of the man himself and it’s also a brave strategy (he could have kept those giant singles from “Cruel Summer” for this if he truly wanted, but that would have missed the point). You’re talking about a walking, talking drama magnet with an id-entity crisis who is married to a white reality TV star – in North America, people flip the fuck out at interracial Cheerio’s commercials, for goodness sake, can you imagine the shit he has to deal with? “808’s” was somewhat reminiscent of “Kid A” at the time, but “Yeezus” is a far better stab at it, and even the sequencing feels similar. It’s not at Radiohead’s level, simply because it’s not as conceptually coherent; the lyrics may shock but they don’t bite; the production (save for “On Sight” and a couple of others) is interesting but barely truly revolutionary within his own career arc, let alone when we count other contemporaries such as M.I.A. But while it might feel like an opportunity missed, at least “Yeezus” feels real. I watched “Before Midnight” yesterday, the third in a legendary sequence of films spanning 18 years (starring Ethan Hawke and Julie Delpy). While it was frequently uncomfortable viewing, the sheer brutal reality at times made the audience cover their eyes with their hands – but everybody would always peek through their fingers. They cut to the core, and that’s really the most fascinating thing about life – at some point, we will identify with it, we will connect the one who manages to strip away all those layers of bullshit. And even though Yeezus postures about devotion through repelling us, what Kanye truly wants is connection.