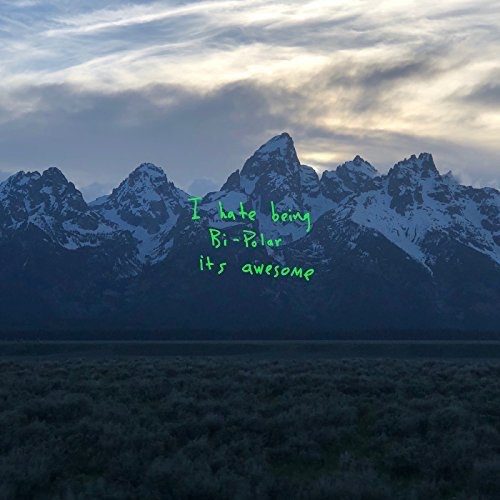 They asked me to do it, but I didn’t really want to. That actually sounds like lyrics from the opening track of “ye,” a song titled “I Thought About Killing You.” The song is Kanye Omari West at his most bi-polar, openly talking about his desire to commit suicide while simultaneously disassociating and talking about himself in the third person. You don’t even need to read the lyrics to understand the problem. The song title isn’t “I Thought About Killing Myself,” it’s “I Thought About Killing You.” West doesn’t even know who he’s looking at when he stands in front of the mirror in the morning. I’m not sure who he is when I look at him any more either.

They asked me to write this review, but I didn’t really want to do it. I’ve grown tired of Kanye West’s antics. A decade and change ago I thought of West as one of hip-hop’s greatest artists, and now I feel guilty about putting that label on him, as though I somehow contributed to his slow inexorable mental decline by applying that pressure. Greatness is expected to be great over and over again. What’s Kobe Bryant without a championship? What’s LeBron James? It’s not good enough to be great when people expect you to do it all. West was expected to do it all — rap, produce, and be a role model. For a while he seemed to be able to juggle all of these expectations. When his mother died in 2007 though things began to change. It was subtle at first. We’ve come to expect occasional outbursts from actors, celebrities, athletes, musicians. Fame along can make people snap. You might say “Yikes” if you’re downwind of the tirade, but you can at least understand how having cameras on you all the time can make a person lose their cool. Everyone needs privacy sometimes.

“I think Prince and Mike was tryna warn me
They know I got demons all on me
Devil been tryna make an army
They been strategizin to harm me
They don’t know they dealin with a zombie
Niggas been tryna test my Gandhi
Just because I’m dressed like Abercrombie
You see?! You see?! That’s who I’m talkin’ ’bout, that’s why I f–k with ‘Ye
See that’s my third pers’, that’s my bipolar s–t nigga, what?
That’s my superpower nigga
Ain’t no disability, I’m a superhero!”

They asked me to talk about Kanye West’s album “ye,” but I don’t think his superpower makes him a superhero. I have a family member who is actually bipolar and it’s not pleasant. One minute he’s charming to the point of being alarming. He’s shaking hands with everyone in the room, offering them unwanted compliments, not realizing people find his behavior abnormal and offputting. You ask him a question and he’ll go off on a ten minute tangent unrelated to what you asked. Then he’ll ask you for a favor and you’ll politely decline. The mood changes and suddenly you’re dead to him. How could you deny someone so smart that MENSA called him and asked him to join (yes he’s actually said this) such a simple request? He is unkempt and untidy in his appearance. He tells you inappropriate stories about his sex life you’d rather not hear, and laughs like it’s all funny. It’s not funny. Being bipolar is not a superpower, it’s a curse. He doesn’t realize his behavior causes people to distance themselves from him, and he refuses to medicate his condition because he doesn’t believe anything is wrong with him. It’s all too familiar to me and it makes me uncomfortable talking about Kanye West, no matter how good or bad his music might be.

“They” are the readers of RapReviews, and I am the founder/editor of the website. I feel like Common Sense talking about hip-hop when it comes to Kanye West – I used to love him. Then West said “slavery was a choice.” Then West put on a MAGA hat. Then West jumped on a desk and yelled at students to leave Elon Musk alone. He likes to say that he’s a “free thinker” or that he’s “thinking free.” As he says in the intro to “ye” he likes to say things out loud just to see how it feels. Most adults have a filter in their heads though and think about how the things they’re going to say would sound to other people, and if it seems like people wouldn’t react positively to it, that s–t doesn’t get said. Maybe that’s why Kanye West likes Donald Trump so much. Trump doesn’t seem to posess that filter either. He thinks white nationalists and the people protesting them are equivalent and that there are “good people” on both sides. He tells North Korea that we won’t be pushed around because we have nuclear weapons and unlike them “OURS WORK.” He tweets incomprehensible things like “covfefe.” Neither one of these men are capable of tact, grace, diplomacy or even basic human decency. They are too wrapped up in the ego phase of their manic bipolar swings to acknowledge anything they’ve done is wrong. They are great and everything they do is great.

My opinion doesn’t matter to West nor should it. I don’t wield the money, power or influence of Mr. West nor do I ever expect to. It apparently matters to a few people though because they asked me why I hadn’t reviewed “ye.” I said honestly that I didn’t want to because I just can’t stand Kanye West any more. They told me to put my personal feelings aside and actually speak about him as a musician and an artist. Unlike Kanye West they are not a disassociative part of my splintered brain speaking to me about me in the third person – they are real people who read this website. In my tiny sphere of influence they want to know what I think about “ye.” There’s still a part of Kanye West I can respect artistically. He says clever/shocking things like “I love your titties cause they prove I can focus on two things at once.” You made me laugh West – props for that. Other times I have to listen to him sing on songs like “Ghost Town” and I’m just like “Whyyyyyyy?” I don’t like Chris Brown either, but he can sing his f—ing ass off. West can’t.

They asked me to talk about “ye” so I’m gonna talk about “ye” and this is what I have to say: I’m not a big fan of the album, but I also don’t hate it. “ye” is an average album with some good songs, some bad songs, and some songs that will clearly be spun millions of times. The problem is that “average” has never been good enough for Kanye West nor should it be. Even though he’s admitted to being bipolar and he clearly is, he’s incapable of seeing how that directly impacts his artistic output. He used to be able to reign in his excesses, but now he pre-releases albums then patches them like a copy of “Call of Duty” in day one. Bruh that’s just not working for me, nor are your current political and social views. Is he still a genius? Undoubtedly. Do I really want to f–k with Kanye West any longer? No.