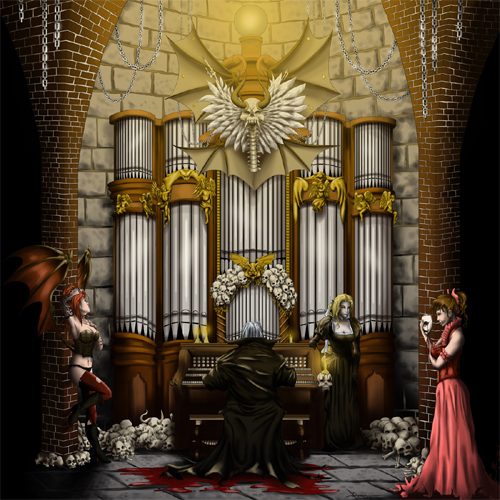 Off the top I want to be sure to credit Sammus for her role in producing a majority of the album. In Random’s press sheet accompanying the album, he’s proud (and rightfully so) of honoring the spirit of the original game which inspired this album, “Castlevania: Symphony of the Night.” That game’s haunting orchestral score was composed by Michiru Yamane, so even though the game and this album are a generation apart, there’s a common bond in having a female composer put in work on both.

Random is all about capturing the spirit of the video games he pays tribute to, as we’ve learned from the success of his past releases like “Mega Ran 9” and “Black Materia: Final Fantasy VII.” To that end Random has split this EP into three chapters, although to be honest at 12 tracks long it feels more like a full album. Random tells the story of both the game and the Castlevania mythology throughout, building up Alucard (son of Dracula) and his quest to undo his father’s evil. If you’re not familiar “100 Years” will bring you up to speed quick as he raps from Dracula’s perspective:

“3,650 days
I’ve been livin in a daze
Now it’s time to rise from the grave, make ’em all pay
I ain’t comin here to play
Okay like we always do about this time
I’ve returned from the essence to get mine
Prince of Darkness, heartless, ready to start this
Puttin fear on the incline, and I’m
in a war with the Belmonts…”

To break up the chapters there are “Interludes” which narrate the story, further drawing you into the story and revealing who characters like Richter Belmont are. Sammus also plays a vocal role in the album representing Maria Renard, one of the integral characters to the game. “Sweet Sorrow” is one such track.

Taking this on a personal note for a second, if I had to make a list of my ten favorite gaming series of all time, Castlevania would rank high enough on the list to compete with the likes of Super Mario, Metroid and Zelda. I’ve always held the legacy of the games in high regard, given how Konami has stuck with and added on to the mythology over the years, and the 2D platformer installments have always been delightfully hard to play. Sometimes the more frustrating a game is the more you enjoy defeating it (see also Mega Man 9). That’s why I’m happy to say Random’s “Nocturnal Cantata” does a worthy job of honoring both a 32 bit classic and the spirit of the Castlevania games as a whole.