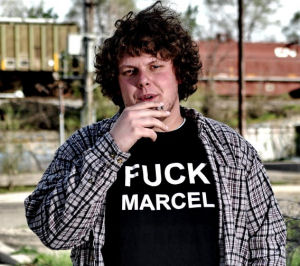 Red Pill is a Michigan rapper on the cusp of breaking out of the Michigan hip hop movement and emerging as a recognizable voice in the underground hip hop scene. After spending the past few years making some noise locally with releases like “Please Tip Your Driver” and “Dream Within a Dream EP,” Red Pill has released two phenomenal albums in 2013 – “The Kick” with Detroit beat smith Hir-O in January and “Ugly Heroes” a group formed by Apollo Brown that pairs Red Pill with Chicago’s Verbal Kent.

Red Pill has a sharp flow and a delivery that is reminiscent of early Blu, with intensely personal lyrics inspired by rappers like Brother Ali and Slug of Atmosphere. Even though his recent work has gotten him more attention – “The Kick

” was released through Fat Beats’ digital distribution and “Ugly Heroes” is a Mello Music Group release – Red Pill still holds down a day job, which heavily influences his blue-collar lyricism.

In an interview with RapReviews, Red Pill talked about the serendipitous way he got linked up with Apollo Brown, juggling a full-time job and budding rap career, the movie “Inception” and what rapper he would like to split a bar tab with.

Zach Gase: So to be clear you are not the same Pill that used to be in Rick Ross’ crew right?

ZG: You see how that’s confusing because he was on MMG and you’re on the underground MMG?

RP: That’s actually sort of funny. I never thought of that. I knew that there was another Pill, but I didn’t even think of the MMG shit.

ZG: Anyways you just dropped Ugly Heroes, how’d you end up getting hooked up Apollo Brown?

RP: We’re both from the scene, so with Michigan it’s like, there’s a lot going on but at the same time it’s kind of small. Everybody kind of knows everybody, or knows how to find somebody.

When I was living in Lansing, MI going to Michigan State, I worked with a group called the BLAT! Pack, and they were running a monthly hip hop show. And we had a beat battle, and had Apollo Brown judge it – I was one of the judges – and I met him there. He didn’t really say much, I mean we talked for a minute, but I think at that point he was living in Ohio, so he had to drive back. So he didn’t have a lot of time to talk, but I gave him a copy of the album that I had out at that time, which was “Please Tip Your Driver.”

Didn’t hear from him. Probabaly close to a year later, a friend of ours was going to L.A. and had a going away party. I met with Apollo there; we talked a little bit more. He turned out to be a really cool guy – I didn’t know he went to Michigan State, so we connected a little bit, but didn’t seem like he was interested. So at that point I was just kinda like, leave this shit alone.

In like January 2011, he hit me up and he had this track that he had to do for this compilation. That ended up being the track, “This Is Life” off of “Ugly Heroes.” He gave me a really short time frame like four days, and I had to return it. I was freaking out because it’s Apollo Brown, I was really excited. I ended up giving him the track, and he liked it. And he sounded pretty excited about it, so I was like all right, this will be good. It was like a week later, he hit me up and asked me to do this project.

I guess the reason is all because another mutual friend of ours – it had nothing to do with all this build up, all this talking. It was because this dude sent him a video that I randomly shot on some drunk shit, my friend wanted to do a video. And this other dude sent it to (Apollo) because he thought it was cool.

ZG: So you gave him a CD and all it took was a little YouTube video to get his attention?

RP: Yeah, actually the first time I went over to meet him at his apartment, he still had the shit wrapped up – he never even listened to the album (laughs). That’s how this shit is though, it’s all luck. You gotta put yourself into the opportunity to get lucky, but that was just some random shit and it put me in a really good position.

ZG: You’ve said on Twitter that your time working at a plant heavily inspired your verses on Ugly Heroes, how was balancing a job and recording?

RP: It’s difficult, but I’m actually really lucky in a sense. It’s a really small machine shop. I’m very lucky I have very understanding management. They’re really supportive and have been helping me out. When they gave me the job, I told them I need time off, from time to time. A normal schedule for me is working 48-56 hours a week, 6 or 7 days a week. It’s tough man, but they make it really easy when I say I gotta go to Chicago to work on this Ugly Heroes project, or Texas to go to SXSW or whatever the fuck it is. They usually don’t give me trouble for taking time off, which has been super helpful.

I got a little bit of money coming in right now, but barely anything, from the music. So I can’t live off that, so I gotta keep working. It’s fucking hard, man. The hardest part is when you start to break in a little bit, but you still have to do all your regular life shit at the same time. I think this is going to be the hardest part – actually it’s probably going to be worse in the next year or two. But yeah, I mean I go into work everyday around 7 in the morning and get out around 3:30.

RP: {*laughs*} I know, it really is. It is a very similar story, or whatever. I literally drive down 8 Mile the whole way to work.

ZG: A common theme on Ugly Heroes is dealing with poverty, a topic that has been covered by a lot of rappers, how did you and Verbal Kent take a different approach to rapping about being broke?

RP: I think what we did with it. It sounds cliché, but I think this more of the average experience of people who don’t really have a lot of money. It doesn’t matter where you’re from, if you come form a working class area, this is more of the average experience. You’re around that shit, you see that shit – the drugs and violence or whatever. But for the most part, most people aren’t involved in that shit. Most people go to work everyday, they take care of their family, and they’re trying to survive. And I think that, to me, is what’s different.

I’m not out here saying we’re on some groundbreaking shit. We’re just writing about what people are going through everyday fucking day anyways. When you have gangster rap – which is cool, I listen to a lot of it that shit – but the elements I related to from it were the struggles and poverty. I couldn’t relate to the crimes, I couldn’t relate to the drugs, it just wasn’t me. That’s not how I grew up.

ZG: You also dropped “The Kick

” and “Dream Within a Dream” (with Detroit producer Hir-O), what made you record two projects inspired by Inception?

RP: That’s actually Hir-O’s fault, kind of. I had no intentions of doing that. My name’s already based off of a sci-fi movie, so it’s like having another sci-fi themed movie going with the music, it really was Hir-O’s idea. Me and Hir-O just go together on some like, we were young kids – I think at this point we were like 21-22 when we decided to do that record.

The whole point of it was like, we gotta get people in the Michigan scene to pay attention to us. It was kind of that young, kind of immature mentality, like fuck everybody else. We gotta show people, but in reality, most people, they just don’t care or haven’t heard of you. We were like, we gotta wake people up, people are sleeping. Hir-O came up with the clever idea to call the project we were gonna do, “The Kick

,” from Inception, which at that point just come out. Even though it took us like fucking 2 and a half years to get this album done.

From a writing perspective, I watched the movie a whole bunch. A lot of these themes, a lot of these details that was in the movie, I could apply to my life in certain ways. But we didn’t want to be super heavy-handed with it – maybe we were – but we didn’t intend to.

ZG: Yeah I haven’t even seen it yet. A friend let me borrow it and I was going to watch it before I reviewed “The Kick

,” but I never ended up seeing it.

RP: {*laughs*} It is a good movie. It’s not like I’m a huge Inception fan or something. It was cool.

ZG: One of my favorite lines on Ugly Heroes is when you say “I wanna be a rapper you can split a tab with, split a cab with,” if you had to choose a rapper to have a few beers with who would it be?

Yeah I’d say Slug. I’ve only met him outside of shows, shaking people’s hands on some fan shit. But honestly that’s – if there’s something I’ve learned from that guy, just watching what he did when I was a 14 year-old kid, I think that his approach to just being a good human, outside of this rap shit, is probably one of the biggest thing I’ve learned from him. Just how to do this shit – just being an accessible to people and being a nice human. Being human first, I think a lot of guys forget that shit.