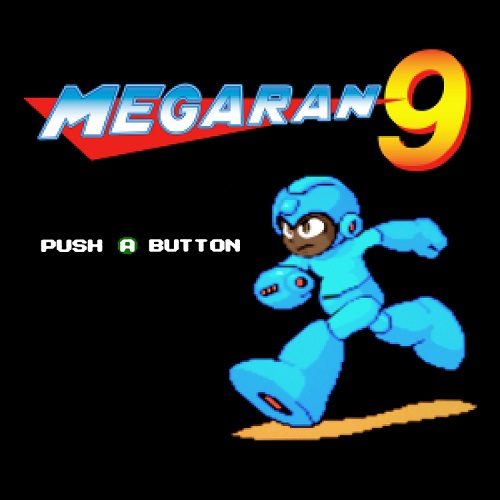 The blue bot is back in town! It’s been a couple of years now since we were introduced to Mega Ran, the robotic alter-ego of underground rapper slash producer Random. The robotic rapper’s debut won praise for sampling eight-bit instrumentals from classic Mega Man games of our childhood, and as it turns out, Capcom themselves realized the value of tapping into such nostalgia. Rather than cranking out another modern day sequel with a super sleek design, Capcom went retro for Mega Man 9 and designed a new OLD game. 15 years after the last Mega Man game to ever appear on the original NES came a new sequel that for all intents looks, feels and SOUNDS like you’re playing it on that old sideloading toaster oven. What’s next – a new sequel to Duck Hunt? (Only if they let us shoot the damn dog this time.) I kid. In truth I was overjoyed to get the old pixellated Mega Man back. Three shots at a time, let’s wage war on the forces of evil.

Now Random may be borderline otaku when it comes to Mega Man but if you’re going to obsess then you might as well go the full-length. After all the beats and rhymes of Mega Ran obviously tapped the pulse of still beating Nintendo hearts, those same fans who will pay $5 on a Wii just to play Super Mario Bros. one more time; the same ones who bought the “Game Over” compilation with video game raps by Masta Ase and the Cocoa Brovas (Smif-N-Wessun) almost a decade ago. Having already proved the formula works once, the rated R robot star decided he too could make a sequel to his last NES classic. It may not be entirely clever to call the album “Mega Ran 9” but it seems Capcom has no objections – in fact their logo appears prominently on the album’s back cover. To be fair the name is also justified by the beats – Random and his slew of production cohorts sample almost exclusively from the new game of the same name. This results in some surprisingly brilliant interpretations such as Samik’s “Splash Woman,” chopping up the level from Mega Man 9 at a slower tempo and lacing it with a rhythmically pleasing drumtrack. Random’s rap is pretty good too:

“This is a mission not a small time thing
Got me on the case like I’m Sherlock, Holmes
My dome kinda messed up from what I’ve been seein
and what I’ve been hearin, got me not knowin what to believe in
I was breezin, battlin bosses
The record is flawless, zero losses
‘Til I came across this, stunning young piece
who resided at the bottom of the sea – and she
told me her name was Splash Woman
Beautiful but deadly, she was mad cunning
Had a voice that could soothe the savage
beast, her physique was way above average”

The classic 8-bit Mega Man series never had a female boss robot until Mega Man 9, which either means gender equality came late to the year 20XX or that Dr. Light and Dr. Wily never thought robots needed a gender. No wait, that can’t be true, because Mega Man has a sister robot named Roll. That’s probably because the Japanese thought it was a good pun (his name in Japan is Rock… hers is Roll… ROCK AND ROLL… you can groan now) but it still suggests that female robots were – oh wait, I’M THE OTAKU ONE! You can’t fault Random when this review’s author knows a little too much about fictional video game robots for his own good. A target audience of hip-hop loving video game nerds may be a little bit niche, but if a sequel to Mega Man 8 done inna eight bit stylee can win minds and hearts then “Mega Ran 9” can too. There’s plenty to love here from “The Opening” to “The Outro” including Storyville’s sing-song Galaxy Man melody on “8 Is Enough,” K-Murdock from Panacea turning a LEVEL UP into the beat for “The Bailout” and guest raps from the likes of Ciphurphace and Pugz Atmos on the Andre Jackson laced “Run N Gun.” For my money though the best may be the bassline and Random rap of the 4:20 long “uKnowTheName” or where even a random punchline like “YOU DUDES GET PWN3D” tickles my funny bone. I’m happy to say Mega Ran never went anywhere and the sequel improves on the original – old school’s cool.