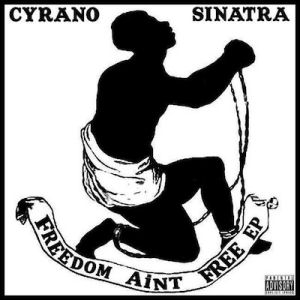 If you check his Petey Pablo andSupastition if you takehis bio at face value (and I have no reason not to). The defining moment in his life appears to have been his father’s death in 2000, at which point he was “reborn” as Cy Yung with a pen in hand and plenty in his soul to write about.

“Yo; temperature gauge when the crowd’s in a rage
Turnin red, hot and blue – lies from the barbecue pit
The misfits worshipping the Dixie Chicks
They still ain’t convinced Mumia is innocent, shit”

“Goldhearted” shows Cy has some serious beefs with AmeriKKKa, including a line which may not endear him to all: “See Barack Obama got white feet – so he might be really representing them and not me.” OUCH. He’s not the first politically motivated rapper to suggest Obama is part of the problem as opposed to the solution though, and with what Edward Snowden revealed about NSA surveillance, we should at least consider the possibility that we may be worse off now than we were under Dubya. Before I diverge too far down a political road though (registered independent and proud of it) I’m just saying that Cyrano isn’t afraid to stir the pot, and I’m not mad at him for doing so. He also gets his digs on hip-hop though on “All About H.E.R.”

“You wanna go back to when the love was great
But hip-hop? I think the love from H.E.R. was fake
Look at who this chick put in my place
Some dude that ain’t tryin to be nothin
Stuntin, frontin, long as the beat bumpin
Hip-hop shakin her ass like Beyonce
And that chick was almost my fiancee”

The soulful beat bumping backdrop by Cynergy Soundz is very North Carolina to me – 9th Wonder, Khrysis, and so on. The variety of producers throughout support Sinatra well as he delivers rants like “I’m proud of black culture/tired of black vultures/they eatin off the food we made/ridin on the rails we laid.” Not every song is a polemic about American and African-American culture though. “Chow Main” featuring Tucson is an uptempo Manifest Beats song detailing his hunger to succeed. “Spoils of War” featuring Nico the Beast is a Kid Hum production that sounds like renaissance faire rapping. And when he takes his own turn on the boards, Cyrano produces a smooth jazzy song to flow on like “Move.”

I’m relatively new to Cyrano Sinatra, but he has an old flow reflecting the last decade he spent working on his craft. He’s an appealing mixture of M1 and Phonte who is working with the right beat maestros to raise his profile. These days it’s hard to say whether or not anyone can succeed in the crowded music field, especially when so much is given away for free. If talent alone is any indication though, Cyrano will go far.