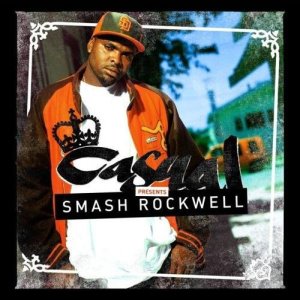 After a three year hiatus, Hieroglyphics’ grimiest contributor is back with another solo album. When “He Think He Raw” was released, Casual sort of belly-flopped back into the solo arena with a rather bland effort. Leaving the support that the personality of the rest his crew provided wasn’t a smooth transition, but it wasn’t so horrible that he couldn’t try to dive into another opportunity. That opportunity is “Smash Rockwell,” an alter-ego perhaps marking the emergence of a new rapper.

“You look like a piiiiieeemmmppp” are the first words that you hear on the album as Casual makes it clear that he’s not to be mistaken for some dull, lifeless wordsmith that sold his mojo for the secret to dope lyrics. In fact, he possesses a priceless combination that can be related to speed and size in football; lyrics and charisma in hip-hop. His Oakland accent is distinct with a hint of dirty south in it and he’s known as a slightly bombastic personality that rivaled the other-worldly Del the Funkee Homosapien as the leader of Hiero’. But he’s also skilled in the art of Dropping a Hot Line in Your Face.

After that intro exclamation comes a wave of funky horns and deep basslines that have been synonomous with Bay Area hip-hop ever since Too $hort was born to mack. The end result is a hot opener, “Say That Then,” that’s filled with funk and energetic lyrics and deliveries.

Casual takes his fans to school and drops knowledge on the different rhyming techniques MC’s utilize on “Styles.” He starts off with a short verse rhyming the same word, then he expands to two syllable rhymes, then to three and so on. The syllable rhyming is something that the untrained ear usually won’t pick up on because often times the words don’t rhyme to perfection; but the fact that the syllables do makes the flow seem natural. Regardless, it takes more talent to craft an imperfect multi-syllable rhyme scheme than a perfect one-syllable rhyme. But don’t take my word for it, check out Casual as he spits with the five syllable rhyme scheme:

“A nigga take a swing it’s his last punch
Cuz I can go to work, you should be bringing a bag lunch
You never been hot, name a city yo’ group rocks
You aint been large since the video jukebox”

It’s not the number of words that rhyme, it’s the syllables. “City yo’ group rocks” and “video jukebox,” is a five syllable rhyme scheme. To all of those young hip-hop heads that never knew, thank Mr. Casual for teaching you something today.

The smooth flow of “Bitin & Freakin” provides some nice fluctuation that wasn’t evident in his last album. “The Whip,” although a lackluster title and subject, is a blend of Casual’s sped-up vocals and regular vocals over a nice string beat that proves to be a successful experiment on the production tip. He drops a heartfelt ode to his mom on “Single Mother,” which exposes the soft side to Cas.

Even with these highlights, there are some fundamental difficulties with this album. He seems to be balancing between a number of different identities. He wants to be a pimp, a gangster, a good son, a flamboyant personality and an underground lyricist on the same CD, which is a very ambitious goal, however it leaves the listener trying to figure out just who Casual really is. It seems his gift is also his curse. He has the flexibility to be all those different people but none of them stand out as being his dominant personality; the one that would leave the rest to complement his true self.

Even with that flaw, which some might argue is a good thing, this album is still a step in the right direction. The music fluctuates and Casual’s flexibility as a rapper works well with individual songs (just not as great for the album as a whole). If you’re a Hieroglyphics fan then you won’t be disappointed by this album and if you’re new to this Oakland Renaissance Man, then this CD is definitely worth fifteen dollars.