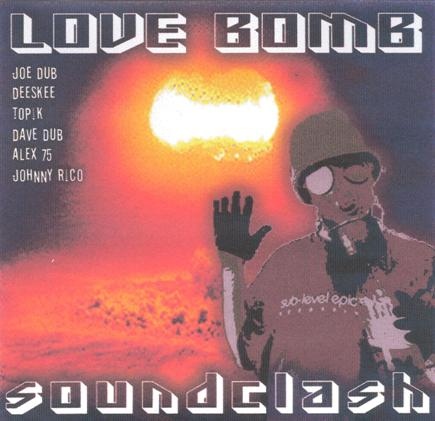 Love Bomb Soundclash are a loose group of MC’s and DJ’s who are creating music on their own, but have united in this project to make some awesome tracks. A few of them have roots in California, thus some of the lyrical flows and production styles show influence of L.A. and Bay Area hip hop circa early 1990’s. “Rage Against The Regime” has Joe Dub talking about the world he observes, which can be everything from plastic people to best friends who are constantly bickering at each other. Pbofa’s production is on the G-funk side of things, but it matches with Joe Dub’s vocal style, a mix of Aceyalone meets Lyrics Born.

“Word Power” (no relation to the Divine Styler song) has Joe Dub teaming up with Dave Dub on a song that sounds as apocalyptic as some of Public Enemy’s best tracks. Joe Dub explains his mission in “Cliff Notes” (“I’m a people person, and I make people music/lay down the beat one take, run through it/I’m a peaceful person, and I make peaceful music/not many, if any, can do it”), but its impact is limited only by Alex75’s lightweight production.

DJ Deeskee does all of the cuts on the album, but he is at his best when he’s just producing. “Rappin’ Renegade” has the group going back to 1982 with electro-beats and a groove in Joe’s voice that not only enhances the party vibe of the song with knowledge, but also honors the old school in style. Deeskee’s production is more daring in “Meaningless Place”, arguably the best song on the CD. Joe Dub flies off and spits out words like crazy telling listeners about looking for something better in life while Deeskee mixes an acoustic guitar with a Paul Horn-ish style flute. The song is highlighted by the female element of Love Bomb Soundclash, Topik, who continues with the song’s theme of questioning one’s self:

“And Hallmark titled postcards signed ‘I wish you were here’
And we could sit on the roof with our scarves and
drink with the passing cars
Checking the time zones in my watch while the city lights remind me
The reasons I left in the first place, and why I need to return
I’m starting life at an awkward situation feeding on
the letters that cause me to be concerned
When going back to the pressure
And forcing the mid-morning sun out of my face”

In song, Topik is not only looking for a physical home but a spiritual one, and the conflicts in that personal search is something I can relate to.

With Joe Dub’s recent move to Honolulu, it will be interesting to see how the elements of the islands will influence him. His flow at times can sound jumpy and happy when the lyrics aren’t always something to smile about, that will be the appeal for many. Deeskee’s production style seems to be in-the-making, or at least evolving, and I see some good things coming from him in the next few years. Topik is going to come out with a compilation of old and new material, and seems to be one female MC who truly deserves attention due to her flow and songwriting. Whether it’s on their own or as a unit, Love Bomb Soundclash is something uniquely different, and in a 2002 mind state that’s a refreshing sigh of relief.