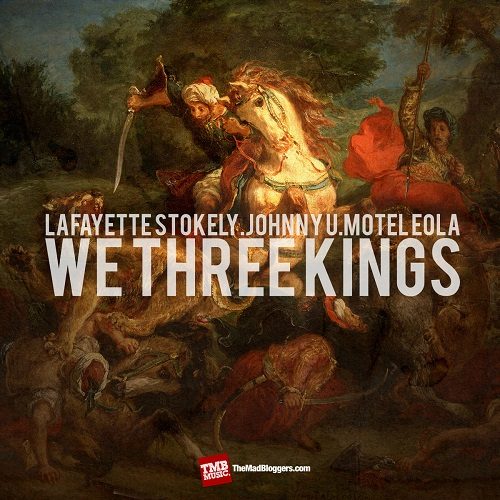 Christmas in July? That was my first thought when hearing the opening hymn of the “We Three Kings” EP. There’s no yuletide joy to be found here – it’s just a means by which to introduce rappers JohnNY U and Lafayette Stokely plus their producer Motel Eola. I know a little about the latter thanks to the fact I get frequent press releases about his latest projects, and having listened to a few casually I felt the UK producer was up to snuff. It’s good to see him joining the ranks of those who want to do cross-ocean collaboration, bringing the former colonies and their spurned monarchy back together in hip-hop unity.

There’s a small amount of frustration for me here in the fact that this EP, albeit a free download, is not segmented into the individual songs. It’s one 13 minute long track, which I suppose makes it easier to know how long the EP is, but not at the expense of me having to chop it up with Audacity myself just so I can choose the song I want. Of course if I do chop it up I might take out the entire Joe Louis and Rocky Marciano skit, which is unrepentantly pilfered from “Coming to America.” It’s not that it isn’t funny, or that the reference to a movie about kings in Queens doesn’t fit the album name, but it’s nothing but filler from a movie I’ve seen a hundred times already. If I want to see Eddie Murphy I’ll watch it – I won’t play this album to hear it.

As for the rappers themselves, without Motel Eola, I think they’d be thought of as clones. JohnNY U sounds like a facsimile of Pusha T right down to his inflection at the end of bars. Lafayette Stokely reminds a little me of Raw Poetic (Panacea) but the resemblance isn’t as close. Then again it could be that I’ve got the two confused – in which case flip the comparisons to the other rapper. It’s not as though we get a definitive feel for either man, nor did I get a bio about the rappers. What you read is what you get.

It’s clearly Eola’s production that holds this release down. “Heavy Weighted” is chopped up synths and vocals arranged in a pleasing foot tapping order. “Sire” featuring J. ManifestO has that Wu-Tang style and RZA feel as they rap about “being tired of being humble” and “barely pay(ing) my damn tuition.” So they’re young – that’s at least a biographical fact. “Grand Entrance” is the highlight of the the EP, sounding spooky and gothic, although it comes close to drowning out the emcees at times. While “We Three Kings” has me looking forward to more of Motel Eola’s work, the rest is pretty hit and miss.