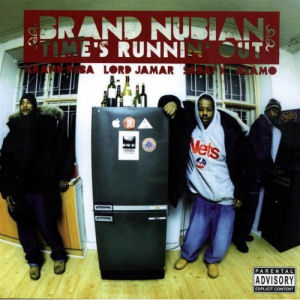 “Time’s Runnin’ Out” is many ways a curiosity. This is (to date) the final album in the long career of Brand Nubian, dating all the way back to the seminal hip-hop classic “One For All” in 1990. That career has not been without some tumult in their membership. Founding member Grand Puba left to develop a solo carer and wouldn’t rejoin the team until “Foundation” in 1998. The critical acclaim the reunion received must not have been a strong enough motivating factor to record another album, because it would be sixMORE years until the Nubians joined forced again to release “Fire in the Hole.” All the while the individual members of the group made solo albums and continue to do so to this day – the most recent being Sadat X’s “Wild Cowboys II” in 2010. This group often doesn’t act much like one at all.

Nevertheless the Brand Nubian name carries weight in the hip-hop world, and at times it has carried some controversy as well. They’ve been accused of everything from being racist to homophobic to anti-semetic, and through it all they’ve taken the criticism in stride and kept on moving. More than most these three emcees are greater than the sum of their parts. Grand Puba is as gifted as any rapper to come along in the last three decades or more, but at times seems unmotivated and uninspired when rapping on his own. Lord Jamar is so low-key that he often raps his way into quiet oblivion, even though he’s got more than his fair share to say. Sadat X is the most over-the-top of the three in terms of his energy and occasionally non-sensical rhymes, and left to his own devices goes on wild tangents that completely forget any semblance of song structure. Their solo albums can be either brilliant or bad, but their group albums are (with one glaring exception) good to great. That however hasn’t motivated them to work together more often, which is something they feel compelled to address on “Once Again”:

Grand Puba: “Took a solo journey with my microphone tool
Wasn’t with the Nubians but we still remained cool
Had a nice run, smacked you with a few hits
But deep down inside I missed the three man skit
Now it’s all official and it’s back on again
So run and tell your friends, it’s Brand Nubian”

Lord Jamar: “3D, original cipher, the black viper
Type of shit to give you satisfaction
We’s the main attraction
Brand Nubian, my crew be in a class by itself
Unsurpassed, plus we stompin ass”

Sadat X: “Brand Nubian, can we hear just one joint?
With all of y’all, e’rybody, the original three
Grand Puba, Lord Jamar, and I self we
And if you wanna see a reunion well just come along
Click your heels, play the reels, Brand Nubian appeals
in this sordid game, involvin record deals”

Lord Jamar: “We heard they didn’t get along; heard they’d never do another song
Brothers was wrong, not many others that could last this long
Our past was strong, but yo our future’s even stronger
Last longer than a Duracell, straight from New Rochelle”

Now that’s a strong statement coming straight from the Brand Nubian crew to you in the year 2007… or is it? You’ll recall in the introduction I said that this album was in many ways a curiosity, and now at last it’s time to reveal the knowledge, wisdom and understanding behind that statement. You see “Time’s Runnin’ Out” was not NEW music from the Nubians that was recorded and released as a follow-up to “Fire in the Hole.” By all accounts the tracks on this album were recorded PRIOR to the release of “Foundation,” making the material found on this CD (or download) almost 15 years old. If that raises questions for you as the reader, you’re not alone.

“Did they record too much material for one album back then?”

“Were these songs the songs that got left on the cutting room floor?”

“Is this a blatant attempt to cash in by releasing a bunch of half-assed songs?”

After listening to “Time’s Runnin’ Out” exhaustively, I think it’s safe to say the answer is “all of the above.” There are definitely songs on here which deserved to be released back in 1998, which still stand the test of time even in 2011. Sadat X’s stream-of-consciousness rap in “Seen Enough” is among the best that he’s done, and the light and almost whimsical musical track gives the triumvirate the space to let their voices dominate. Lord Jamar is highly quotable here too: “Like the Qu’ran or the Holy Grail, my New Testament is excellent/you’ve been afflicted with the pestilence/got you addicted to the nonsense/with no contents.” The Nubians are at their mack-tastic best on “Girls, Girls, Girls,” and the Alamo produced “One Time” literally makes something out of nothing thanks to a deft touch with the piano break and drum track.

On the opposite end of the spectrum is tracks like the aforementioned “Once Again” produced by Lord Jamar. To be sure it’s a strong statement lyrically, but unfortunately it’s so weak musically you won’t want to listen to it more than once. “Rockin’ It” was a nice idea but it’s the kind of throwback format better suited to a (now defunct) group like Jurassic 5. Grand Puba seemed to be going somewhere with the production of “Enjoy Yourself” but it occurs to me he never reached the finish line, and since this didn’t get released back what we hear now is the incomplete beat. The same can be said of Lord Jamar’s “Go Hard,” which betrays just how dated this material is when he opens the song by declaring it “ninety-seven shit.” As is so often the irony of this album, even the weak songs musically have strong rhymes lyrically.

Grand Puba: “I speak on it, give it to you like you want it
Cause I need a fat wad in the year of Born God
I hit you with the rhyme speak unique
Make a stripper shake they buttcheeks, sendin competition up shit’s creek
Words spit from these semi-automatic lips
And it don’t quit, lockin microphones like a pit
Bill Blassie, classy, like I’m sassy
Twist they own chasis quite fastly cause the God’s nasty
I got to stack these chips and take long trips”

It’s been a long trip for the Nubians, and for their faithful followers, and “Time’s Runnin’ Out” is where we’ve all ended up. It is in a sense the ultimate contradiction – brand new shit from the Brand Nubians that was in fact quite old in 2007, and even older at the writing of this review. It comes as no surprise to me that this album got little press and probably the least sales of any release in their entire career, because nothing whatsoever was done to endorse or support it when it came out. It wouldn’t have taken much effort to paint this one as “gems from the vault” and put it out to the public as such, but no one tried, and based on some of these songs it’s clear why. The hardcore Brand Nubian fan will want this one, but the rest will pass it by.