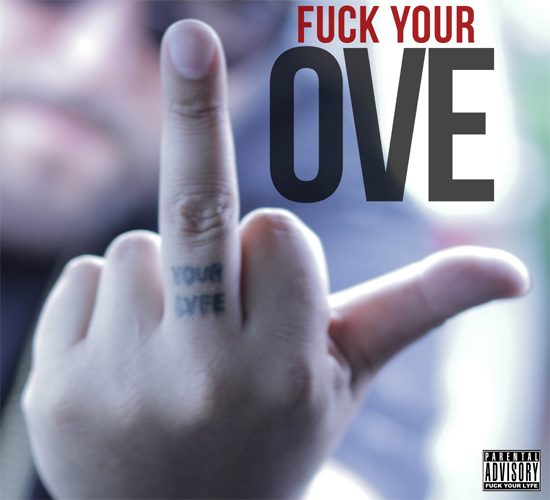 Nems will be the first to admit he’s not the easiest rapper to love. In fact Nems revels in flipping people off, and not just on the cover of his latest album “Fuck Your Love.” Despite the fact he raps like a living breathing version of Katie Kaboom, he’s giving away “Fuck Your Love” for free as a download – an act of generosity. Despite that he’s so mad at being underrated and underpaid he devotes an entire track called “No Talking” to bitching about “fuck boys.”

“I sit back and I listen to everything that’s goin on nowadays right?
And some shit is just unacceptable
Plain and simple, point blank period nigga
Like there’s no creativity now
Niggaz is just freestylin in that booth nowadays
I don’t know what the fuck happened nigga
… And you and you pussy, go get your posse
Put your money where your mouth is, Ted DiBiase”

Nems is the textbook definition of homophobically incorrect. In the aforementioned song alone he freely drops slurs like “nigga you too bitch” and “I’m a vet homo” – and just when you think he’s done he accuses “faggot niggaz” of “tasting every color of the rainbow.” It tempts one to play armchair psychologist and try to make sense of his rage, but “pops died – mom at work – I had to raise myself” as heard on “Take It Away” probably sums up his issues best. In between the bursts of anger and rage there’s skill to be found and beats that do a good job of supporting it. Joe Josh does 50% of the beats and deservedly so. The ambient echoing backdrop of “Deliverance” gives Nems room to breathe and makes his pain more personal:

“My old ex sayin that she love me
My new ex couldn’t give a fuck B!
And I don’t want neither one of them (nah)
But I want them to want me
And I just turned 30 (damn)
And I’m not where I want to be
Sometimes I wanna curse God out like ‘Yo!
Why the fuck is the path you put in front of me?’
And these bills keep comin in
but I ain’t got a job
I live drug free but every night I’m servin the fiends
Cause it’s either that or go out and rob”

The other producers don’t fail Nems though. Variant Dash gives a pleasant piano and violin melody for the personal and touching “I Got You” ode to his mom. Chi Bheats produces a very Chi track for Nems on “The Thirst Is Real,” which is almost ironic given that earlier on the album he mocked speed rappers. Still I find myself drawn back to Joe Josh again and again, who jacks some classic R&B for “Robbery,” and Nems is so inspired he winds up singing. “Take It Away” may be his crowning achievement.

As studies in contradictions go, Nems is one of the more fascinating you can find in hip-hop. He may growl and snarl his way through songs like a New York stereotype sprung to life, and he may spew hateful slurs at a rate that would make George Takei blush, but there’s clearly an intellectual thug underneath the surface. It’s not even DEEP under the surface – we’re talking half an inch or less. This is a rapper who confesses he’d spend up to two hours on one bar, just thinking of the perfect punchline to impress his peers and strike fear into his enemies. The reality is the more Nems tells us to fuck off, the more he actually wants us to love what he does. He’s rough around the edges, but if you like gritty hip-hop, he’s not hard to love.