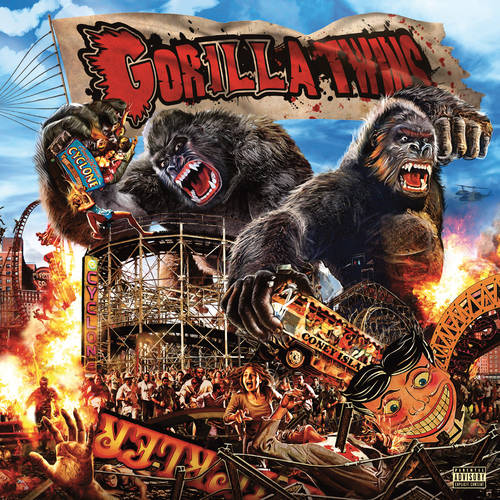 When I hear “twins” and “hip-hop” in the same sentence, it’s usually Big Pun and Fat Joe who come to mind. The two literal New York giants even made a song called “Twinz” where they destroyed Dr. Dre’s “Deep Cover” beat. In the 20-plus years since, more juggernauts from the Big Apple have made strides for the hip-hop their city is known for. Enter Nems and Ill Bill. In Nems’s own words, “what do you get when a Jew and a Puerto Rican step in the booth? Haha! Gorilla Twins, motherfucka!” Not since a Sean Price album have I seen the gorilla/ape concept thrown around so regularly, and these two fellow Brooklyn emcees have a similar girth and lyrical range to arguably make them rap Gorilla Twins. Lyrically, they don’t aim for anything deep or high concept, unless you consider a couple of NYC street dudes who like to rap to be a high concept.

Though certain tracks aren’t really needed, both emcees attack the rest with a ferocity worthy of both their album’s title and cover of two giant apes destroying Coney Island’s famous amusement park. The album kicks off with the Furio-produced “Guerilla Twins”, which plays the line “Guerilla Twins, we militant….” repeatedly to the point of redundancy. Appropriately on “Married to the Game”, we see the chemistry that put Bill and Nems together in the first place. Star Command produced this track with a prominent organ sample as both emcees start off their respective verses about divorcing on unofficial holidays (St. Patrick’s and Valentine’s Day). The album picks up in a major way on “Wolves”. Produced by the late Josh the Goon, the L.A.-based producer crafted a beat that has such a menacing east coast feel to that it’s almost a tribute. An assist by Jedi Mind Tricks’ Vinnie Paz only adds to the track’s head-nodding threat:

After that, we’re led into the album’s two singles. The first being “Highs & Lows”, which has an organ/synth sample with boom-bap drums courtesy of Stu Bangas, his first of two appearances on the album and undoubtedly a Cannibal Hulk reunion with Ill Bill. The Charlie G.-produced “Supply & Demand” has both emcees lyrically waxing about how there are no days off with heavy supply and much-needed demand. Musically, it has hard drum snares and vocals from an ethereal female choir. “Bong!”, produced by Shortfyuz, is the other single after “Highs and Lows”. It contains a string sample which is slightly sped up to go with the rapped lines, which contain humorous gems such as “coked up like the ’86 Mets team.”:

The album isn’t exempt from filler. The skit “Twinning” has no purpose other than Nems reinforcing his whole “fuck ya life” mantra. The next two tracks return back to the album’s musical New York City vibe. On “Nah”, Scram Jones makes an appearance and provides some rather frantic drum programming for the two emcees’ Brooklyn street talk. On “Shootout at the Cyclone” Ill Bill decides to get behind the boards and produce this track himself. Framed as a newscast of the aftermath of a Coney Island crime rampage, the track features Lord Goat, formerly Goretex of Bill’s Non-Phixion crew.

The three songs closing out the album include “Gunners”, where S’pply N D’mand provide one of the strongest beats after “Wolves”. It’s almost dramatic the way it starts off. Then Stu Bangas re-appears with “Pay Homage.” It’s under two minutes and feels derivative, like everyone involved is doing their best to, ironically, pay homage to M.O.P., while the actual album closer “Adios” is the longest track. It’s over four minutes, pessimistic, but about the inevitability of life. Produced by Scud One, it has a melancholy boom-bap feel. It features Immortal Technique and DV Alias Khrist, the former having the verse that’s most in tune with the song’s concept. As stated “Gorilla Twins” isn’t a deep concept album, nor does it contain a political message. Imagine Method Man and Redman, but without the copious amounts of weed, and what you’ll see is Ill Bill & Nems: Gorilla Twins.