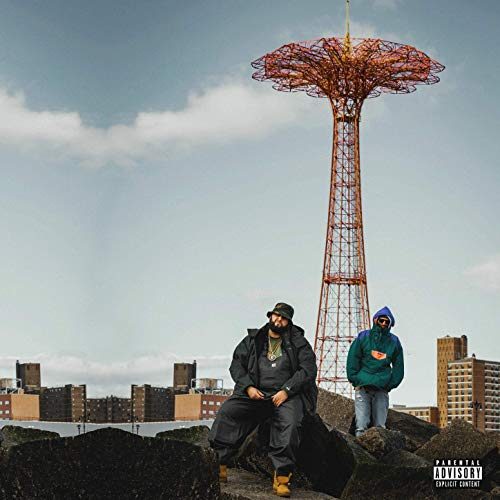 The hip-hop battle circuit is no different from the arena of professional wrestling in many ways. One of the similarities that binds both areas together is identity. Battle rappers take on different names for themselves and different personas, just like pro-wrestlers do. Wrestlers have the squared ring with an audience of spectators, battle rappers have an audience no matter where the competition takes place. Also, wrestling moves and dialogue are choreographed and scripted before the finished product reaches an audience. Battle raps, though now only rarely a raw off-the-top verbal jousting, are just as pre-written as their wrestling counterparts. Similarities aside, the larger-than-life imagery of wrestling, much like that of comic books, rubbed off on hip-hop long ago. It’s why you have rappers peppering their rhymes with WWE/WCW references, praising seminal performers like Ric Flair, and even utilizing wrestling-inspired monikers (as Buffalo’s Conway and Westside Gunn have as Hall & Nash). Coney Island emcee Nems is also one such rapper. A battle emcee champion via MTV2’s Fight Klub, he’s teamed up with producer and fellow Brooklyn native Jazzsoon to create “Gorilla Monsoon”. Though a little of a departure from his well-known battling roots, Nems has nonetheless infused this album with New York City grit in equal bits from the rhymes and the beats.

Considering how nostalgia is currently very marketable and that aspects of it are inherent in the words, beats, and the even album’s title, it’s understandable how one would think that Nems is merely capitalizing on a trend. A quote sampled from 2012’s “The Dark Knight Rises” quickly deadens that idea: “Oh, you think the darkness is your ally, you merely adopted the dark. I was born in it, molded by it.” As stated earlier, Nems is from Coney Island in Brooklyn, New York City. He came up in a time and place where hip-hop and sports entertainment were both burgeoning and on the come-up themselves. As such, it’s only appropriate that “Gorilla Monsoon” be plentiful with hard-hitting sounds, grits, and grime of the concrete jungle delivered by those born into it.

Jazzsoon produced the album in its entirety and immediately set the sonic tone of the album with “Step Aside (Intro)”. He utilizes piano and flute samples to haunting effect for when the dust-heavy hard snares kick in. Though every track has facets of that in-your-face New York City attitude and demands attention, the one track embodying this perhaps the most was “Timb Boots”. Driven by sampled funk guitar licks and head-nodding drums, Nems’ rhymes and the “timb boots to the side of your dreads” hook help make the track a definitive head-nodder for sure:

Presumably, in homage to his Brooklyn roots, he rhymes and rips the instrumental to the Notorious B.I.G.’s “Who Shot Ya?”. The end of the track has the following bit of poignant dialogue between Nems and a young teen before it segues into “Intermission”:

Both tracks show that Nems is against current hip-hop trends such as mumble rappers and skinny jeans, especially the former. However, instead of creating a scathing diss track or throwing angry words of indictment at their direction, he actually thanks them. He praises that niche for its low-quality and inauthenticity that allows genuine artists to shine with the art they intend to make. It’s likely the reason why the album cover has him wearing baggy jeans and Timberland boots in front of the Coney Island Parachute Jump. He takes aim and fires at opponents with “hunnet shots” on “Gahbage” and “Where You Know Me From”. The latter teams the FYL emcee up with Griselda rapper Conway the Machine. Though the Buffalo-based Griselda roster are closer to Canada than any of the five boroughs, their planted-in-the-streets motif along with their propensity for lyrical bars enables them to mesh very well with their NYC affiliates:

Outside of the overt lyrical aggression, the track “Leave Me Alone” shows Nems reflecting on his upbringing, his parents, and how his rap persona is an amalgamation of his pent-up anger and frustration. “200” has an interesting back-&-forth concept with Spit Gemz, with both emcees trading humorous lyrical barbs over Jazzsoon’s light-hearted, dusty, tongue-in-cheek production. “Gorilla Monsoon” is a straightforward New York City hip-hop album and one of the strongest to come from that area in 2019. Nems and Jazzsoon have created an album that not only evokes the sounds of their birthplace, but also doesn’t cave in to popular trends.