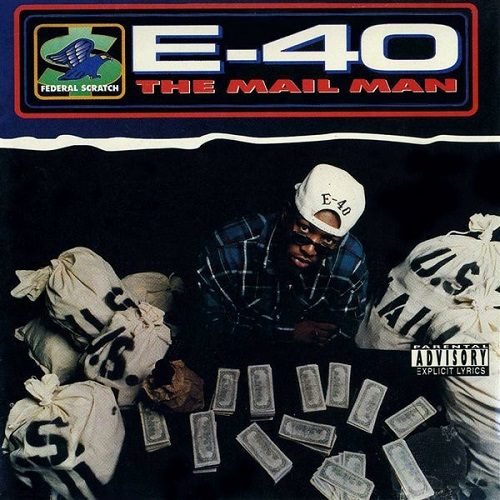 Back in the early-to-mid 90’s, West Coast hip-hop was getting a lot of love. Of course there was Dr. Dre and his seminal classic, “The Chronic”, but there were other artists building their brands and looking towards the future as well. DJ Quik and Snoop Dogg are a couple that come to mind. In the Bay Area, you had Digital Underground, Hammer, Too Short, Rappin’ 4 Tay and Spice 1 holding down the fort. While all of these artists have their own style respectively, not too many of them had a voice as distinct as the emcee whose given name is Earl Stevens. Professionally known as E-40, he has a slew of nicknames and the list continues to grow annually. 40 Water released his “Mr. Flamboyant” EP and “Federal” in 1991 and 1992 respectively, but in ’93 Charlie Hustle dropped “The Mail Man” EP. It would be his last release prior to partnering up with Jive Records, just as Too Short and Spice 1 did before him.

While many emcees both past and present are adamant about how their lyrics are one hundred percent true and are things they’ve done themselves, 40 is quick to point out that he is an entertainer in addition to being an emcee. In a statement that should probably accompany the lion’s share of today’s releases, 40 felt it was necessary to make this point on the introduction: “I’m not just no rapper…I’m a muthafuckin’ entertainer, and the shit I be speakin’ about on tape…is shit that I done heard or seen. If I was really out there doing that ol’ shoot-em-up shit, bang-bang shit…I’d be either dead or in jail somewhere. Po-po stations, player haters and E-40 imitators…y’all need to relax.”

Originally released as a six-track EP, two songs were added to the mix when Jive re-issued it the following year. After the intro, “The Mail Man” gets started with “Neva Broke” and “Bring The Yellow Tape.” The former stresses the point that as long as 40 is able to get his hands on a strap, he’ll never find himself going broke. The musically stripped-down crime story, “Yellow Tape” is a tale of retaliation and revenge with E-40 and his homeboy Herb being the victors.

A sample from The Coup’s “Not Yet Free” provides the title and half of the hook of “Practice Lookin’ Hard”. A quick visit to YouTube and you can see the video which actually features Boots Riley and a young 2Pac. The jazz-funk infused production is mellow and complimented nicely by 40’s verses, as he raps:

“I deep into my shit and it’s straight like that
I be quick to clobber a motherfucker with my Flintstones bat
Nobody likes me on my father’s side of the family
They can’t stand me cause they think that I’m sellin’ that candy
I kid you not, all bullshit to the side I got 20,000 niggas in my organization
Now which one of y’all niggas down to ride I gets juiced off the underground doja
You know that Click shit, that independent shit
It makes me feel like I want to
Got me a baggy full of broccoli and a Crooked Ides 22
I feel crafty, I’m mean muggin but I feel great”

“Where the Party At” features Kaveo, Young Mugzi and The Mossie. If you’ll pardon the pun, it makes for a solid party track. Towards the end, 40 spits a line that he would go on to reprise on a track from Spice 1’s “Amerikkka’s Nightmare” album, as he proclaimed “I got love for D-boyz, ’cause D-boyz got love for me.” The most popular song on this EP was undoubtedly “Captain Save A Hoe”, the term became quite popular and is still part of today’s vernacular. With guest features from his cousin B-Legit, his brother D-Shot and his sister Suga-T, the song can basically be credited to The Click. If the beat sounds familiar to some, it was sampled for UGK’s “Choppin Blades” on their 2001 “Dirty Money” album. All four ride the beat well, but 40 has the most verses on the track and offers this piece of advice to any women out there who want to be “saved”:

The title track is accented by nonstop hi-hats, 808 toms and sporadic trumpets as 40 gets revenge on the ones that killed his homie. It’s a classic case of kill or be killed. Boom, boom, boom, boom-boom on a trick indeed. When Jive reissued the album, they tacked on “Ballin Outta Control” (which was also included on 1998’s “The Element of Surprise”) and a remix of “Captain Save A Hoe.” The bassline was slightly altered and the lyrics were cleaned up.

Back when “The Mail Man” originally dropped, you were likely to hear someone riding around bumping the hell out of it in a Nissan Pathfinder, Volkswagen Jetta or even a Geo Tracker. It has that deep bass that begs to be played at high volume, preferably in a residential area. 40 Water’s tried and true fast-but-enunciated flow is all over this extended play, and while some may argue that his popularity has waned some, he’s still out here doing his thing. He most recently released two albums on the same day, “Revenue Retrievin: Day Shift” and “Revenue Retrievin: Night Shift.” Needless to say, 40’s been consistently dropping jewels for nearly twenty years. With releases like “The Mail Man” and others, E-40 Fonzarelli has earned the right to add another nickname to the list. Legend.