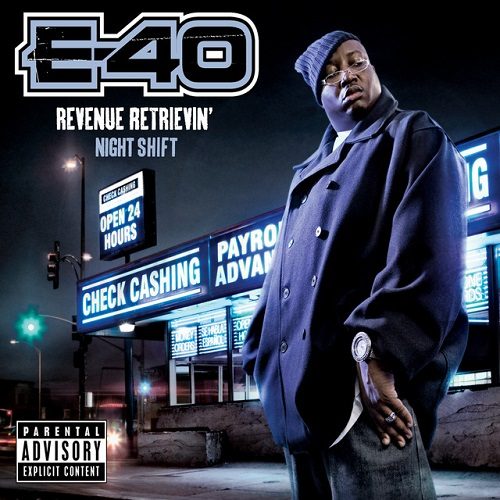 The companion album to E-40’s “Revenue Retrievin’ – Day Shift,” the late night hustle picks up on “Night Shift” right where the former left off. The closer of E-40’s new double wide project found Earl Stevens in search of better days and a better life, but once night fell Rick Rock and 40-Water worked together and found the key to getting ahead – keeping it cooking metaphorically and literally by going in “Over the Stove”:

“Over the stove in the kitchen cookin cha-cha (cha-cha)
With a pickle jar and a pot of boiling watah (watah)
With a Smith & Wesson thirty round choppah (choppah)
Man I’ll knock a nigga noodle down with this power (power)
Gotta do whatever I gotta do to make it through (make it through)
Cause if this rap shit don’t work, mayne I’m tellin you (I’m tellin you)
Got mouths to feed, family and hella bills to pay (bills to pay)
I believe in myself my nigga, this nigga on his way (on his way)”

Muscle and hustle have been the keys to E-40’s success since the early 1990’s and they’re still working for Earl Stevens here in spades. Not surprisingly since this album is “Night” and not “Day” there’s a much harder feel to the presentation. Rick Rock returns on the second track with another banger to remind us that “Nice Guys” finish last and stay broke while “bad guys finish first, and push coke.” Things soften up for the third joint though, potentially a new single candidate not yet released off the CD – the Jazze Pha produced “Can’t Stop the Boss” featuring Snoop Dogg and Too $hort. It’s a West coast powerhouse lineup over a very mellow piano backdrop, with Pha singing the hook to boot. While Todd Shaw’s pimping is as unrelenting as ever, reminding us he only dates “pretty young girls with perfect bodies,” the soft-spoken Snoop is the showstealer:

“I sell a dream
I’m hella clean, this the life you wish fo’
I’m comfortable, you can bump the flow
Brains blew out, it’s convertible
White walls, plush seats
I’m a boss at all costs, I must eat
Vintage statute, grinnin at you
Gold ones, continue spinnin at you”

Too $hort also guests on the Droop-E produced follow-up “Show Me What U Workin’ Wit,” getting more of the spotlight than he did on the previous track. E-40 doesn’t necessarily get more of the spotlight than he did on “Day Shift” though, once again holding only 7 out of 19 tracks down on the solo tip. The guest stars seem a little more heavyweight on “Night Shift” though. Bobby V croons on sure fire radio hit “Stilettos & Jeans,” which features E-40’s humorous punchlines like “you say you a cougar well fuck it I’m a lion” over Teak & Dee Underdue’s beats. “He’s a Gangsta” is another all-star heavy hip-hop track, this time fitting The Jacka, Kaveo and Messy Marv into the lineup. Speaking of left coast Yay Area favorites, Keak Da Sneak and San Quinn both get in on “Power Up,” while Dru Down and Suga Free both flow on the Droop-E laced “Attention.” In spirit and in lineup this half of E-40’s “Revenue Retrievin'” is the most 40-Waterish of the two discs, a position solidified on solo songs like the slow creeping, fast rapping and sinister sounding “Ahhhh Shit!”

“Zany, bizarre, ballistic
Comin off on some of that ol’ ignorant shit
Resickulous verbish gaseous flows
DNZ glasses on my nose
Undeniable, throbbish, mobbish
Forever music, not that garbage
Throw me the pistol, I’ll do it
Street nigga befo’ a artist
Got a whole lot of spit to talk about and a whole lot of speech to speak
The neighborhood fuck with 40, he be preachin man, he teach
Some of these fools be busie, rap about what they made
But at the end of day, between me and you, they ain’t got nuttin to say”

“Night Shift” is E-40 at his most verbal, most pugilistic, most Yay Area out of the two discs – and for my money has the most potential crossover hits to boot. I hate to recommend one disc over the other because an E-40 fan should buy both, but if you were broke and could only cop one for the time being “Night Shift” is the one you should fuck with first.