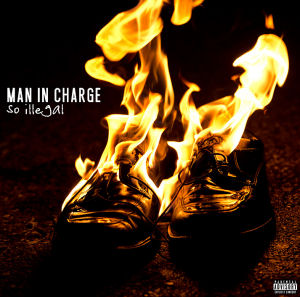 Man In Charge :: So illegal

The Branch Out Collective is prolific these days – seemingly sending a new project our way on a weekly basis. I’m not in a position to complain given each one so far is above average. Since the trend only started recently it hasn’t reached the over-saturation that No Limit Records did in the late 1990’s – not yet anyway – and I suspect things will slow down before the time the leaves in Ann Arbor turn color and start slowly drifting to the ground.

“Let me break it down right quick (right quick)
It’s a fuckin celebration when the mic spit (yah)
Rock a size 8 fitted and some nice kicks
Shouts to the Seattle team, that’s the Westside clique
I was dippin in the scene too (too)
By the ocean but I ain’t a fantasy fool
While these niggaz ride the wave like a Seadoo
I’m slow motion in the yacht, so evil (evil)”

And “so illegal.” Wait though – why is an Eastern Michigan emcee rapping about the Pacific Northwest on “Fuck Wit It?” It turns out he spent a few years there pursuing the grind as both an artist and a underpaid employee – finding limited success in either endeavor. “so illegal” was born of that frustration – feeling isolated, lonely and broke and just not giving a damn any more. When he conceived the album, his intention was to use the most blatantly obvious samples possible (that no record label could ever clear without paying exorbitant fees) and putting the torch to both his dress shoes and expectations. Sadly when M.I.C. moved back to Ann Arbor, bad went to worse as his brother Donovan ‘D-Squeeze’ Hyter drowned – causing “so illegal” to be dedicated to his memory.

“Yo, I’m Don Draper off this line paper
Boss status, I cause havoc in skyscrapers
Huh! Most rappers is disguised haters
Pissed off at the fake that they can’t shake ya
It’s a damn epidemic
I swear to God I’m ’bout to scream eff it in a minute
I’m collecting every dollar, every penny while I’m in it
And laughing at the ones who wonder why I never quit it”

The obvious reference is of course the ad salesman played by Jon Hamm, but I can’t consider his brother being named Don a coincidence – and if it is that’s one hell of one. It’s worth noting that despite all his torment, depression and loss this is not a dark and disturbed project like Drapetomania. In fact this self-produced album is damn near bouncy and pop at times, with “Almost Grown” building up electronic instrumental layers to an infectious chorus crescendo.

“Fuck failure, I’m scared of the unknown
If it ended all tomorrow and we all gone
What’s the legacy we leave?
Would the good that was in us carry on to our seeds?”

It’s easy to scoff when so many rappers claim to be profound or thought-provoking in their bars, but I sense truth in M.I.C.’s proclamation that rap is “more than a pen and a pad” to him. He’s obviously clever enough to litter songs with punchlines and brag about good times if that’s what he wanted – instead he uses tracks to make deeply personal statements. The wry irony of “Live From Paradise” is not to be missed, nor the chopped up industrial Rick Rubin-esque “Light Show,” nor the mellow folksy feel of “Space Heater.” It’s not necessarily a road to riches to make a self-reflective album, especially when you admit it may be littered with uncleared samples, then allow fans to set whatever price they want to pay at their discretion. I respect Mike’s choice though and I think you will too.