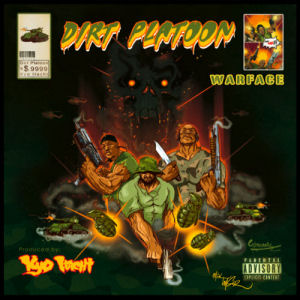 “Throwback hip hop”, “that 90’s sound”, “golden era vibe” etc. are all phrases thrown around far too often by hip hop reviewers and fans, and I’m very guilty of that myself (and no doubt I’ll use such talk again and again). It’s language not only used by those on the listening side though, as artists themselves often use such references as a selling point, some even naming their albums accordingly e.g. 7 G.E.M.S. with their “Golden Era Music Sciences” album. Don’t get me wrong, striving to recapture those days is not necessarily a bad thing as it’s not known as the “golden era” for nothing, but let’s not lose sight of the fact that “back in the day” had its share of simply average product and a great deal of wackness also. I think sometimes the lens of the rose coloured glasses of nostalgia need to be cleansed as it wasn’t all an era of purely classic albums and artists, nor does a 2013 release with “that 90’s sound” automatically entitle that release to be deemed brilliant.

Who remembers artists from the 90’s like Tha Chamba, Brothers Uv Da Blakmarket, Deadringaz, Gunslinguz, Hoodratz, Nuff Ruffness and numerous other lesser knowns? Ok, assuming a name or two there rings a bell, and you recall finding the one and only CD by said group in a bargain bin for $5 back then, and took a punt on buying it; do you still listen to it nowadays on the regular? Can you name more than one track from any of those artists off the top of your head? Probably not, and more than likely their CD’s are packed away in a box “somewhere” and you only see them when you are spring cleaning or moving house. Or you might fish one out from the dark depths of your collection after you’ve been watching old hip hop videos on Youtube, when by chance you see a video by the artist on the sidebar links and check the album out again to remind yourself what they actually sounded like. I know some of you are saying “you don’t know what you’re talking about, that Brokin English Klik album was an under-rated classic!”, and no doubt many of the unknown groups were brilliant, and believe me I was and still am as much into obscure artists/albums as any other long-time obsessive hip hop collector. HOWEVER, by and large there’s good reason a lot of those artists came and went very quickly â€“ many of them were trying way too hard to sound like their more illustrious contemporaries and often came off as poor imitations. Artists who relied too much on biting the styles and sounds of the likes of Das EFX, Onyx, Mobb Deep, Wu-Tang Clan and many others paid the price for their lack of originality and were subsequently doomed to reside in the realms of obscurity forever.

So how does that all relate to the “War Face” album by Baltimore natives Dirt Platoon? In a nutshell, they are part of the current crop of artists who are on a mission to go back in time with their sound. However there’s nothing too outstanding in what they do, and if this album came out in the mid 90’s it would possibly be another one that ended up collecting dust in the rarely listened to section of your CD library (or “in that box under the 7 others in the back of the wardrobe” as is more the case for me).

One look at the album cover instantly brings to mind “The War Report” by C.N.N., and there are also more than subtle hints towards the likes of Killarmy and Boot Camp Click. I don’t think Dirt Platoon were so naive to not realise the obvious connections. There might be some justification for using such imagery for a crew from back in those days, and somewhat in their defence Dirt Platoon aren’t new to the scene (they released their first album in 2002). However, 2002 and 1992 are very different years in hip hop terms, and unlike Raekwon who can (and damn well should) pay tribute to his own legacy in hip hop by referencing Shaolin on a current day album title and its cover, Dirt Platoon’s imagery leans far more to imitation and trying very hard to complete the retro package.

Putting aside the negativity for a moment, one interesting aspect here is that Dirt Platoon is a duo that consists of two brothers i.e. brothers in the literal sense. Although hip hop has had a few artists linked on various branches of their family trees, two brothers forming a rap duo has surprisingly been a rarity. Blood ties like this don’t seem to make too much difference here though as there’s nothing that seems to be gained (or lost) towards the end product by the relation between the two MC’s. Unlike RZA and 9th Prince, the brothers don’t sound very similar (not that brothers necessarily should). Snook da Crook comes from the school of angry M.O.P./Onyx yelled vocal delivery, which I quite enjoy, but it’s generally a mic technique that’s a bit of a mismatch to a mellower track. Whereas Raf the Almighty is equally as aggressive but doesn’t feel the need to scream himself hoarse on each verse and is much more tempered, and thus a bit more interesting to listen to also. The opening track “Animal Shit” is an apt introduction to the crew and is quite typical of what you’ll hear on the album in terms of the MC’s flows, the lyrics, the production and the DJ work. It’s also hinting back to the olden days where the opening track of the album was often the most hyper one:

“Army of Two” is a mellower track where the going all out, relentless flow of Snook becomes quite exhausting to listen to, but thankfully the two MC’s do a lot of back and forth mic passing so Raf brings some relief with each line he spits. “Dirty Work” brings in Ruste Juxx to join the brothers, and I wouldn’t be upset if he was brought in permanently as the third member of Dirt Platoon as he sits nicely alongside them and provides a good balance stylistically:

It’s likely the Ruste Juxx hookup came via the producer of the album Kyo Itachi, as Kyo previously produced an album for Ruste Juxx. In fact, Kyo has been getting his name known in underground circles as he’s also put together albums with LMNO and John Robinson, as well as his own instrumental albums and also compilation type albums with various MC’s. I know what you’re thinking but he’s not Japanese, he’s actually French (with clear Japanophile tendencies). Dirt Platoon couldn’t have a found a better match for their throwback ideology than Kyo, as he too seems to live musically for days gone by.

In terms of rapping and production I can’t help feeling that a lack of originality brings this album down. Even though Dirt Platoon and Kyo are giving us an overall sound that isn’t so common these days, it’s a sound that you’re all too familiar with if you’ve been around hip hop for a decent amount of time. “Wage War” and “Dose of Reality” could be by Royal Fam or any similar Wu offshoot, Raf sometimes reminding me of Timbo King, and other times he’s Shabazz the Disciple. “West Bmore Story” is a tale of drug dealing and hustling intertwined with warzone effects (gunshots and such) that would make Capone and Noreaga proud, although Kyo does earn points here for a very catchy bassline. “Brainstorming” is one of the best tracks on the album but it’s incredibly similar to something that Double XX Posse would have done and the likeness is all I can think of when listening to the song. Essentially you can think of any of your favourite East Coast artists from the 90’s and there’s a good chance you’ll find strong traces of those artists in the songs on this album. One of the few tracks here that somewhat has its own identity is the posse cut “Point of Attack” which is nicely stripped back allowing the vocals of each MC to take centre stage, although I’m not taken by most of the MC’s here aside from long timer Shabaam Sahdeeq and the Dirt Platoon boys:

I have no doubt that many people will REALLY LIKE this album, and I did at first too, but subsequent listens just left me picking it apart for all the better artists that it reminded me of. Yes it’s rough, rugged and raw and will have you wanting to lace up your Tims again, but frankly its copycat nature feels quite boring to me and doesn’t leave an impression. Lyrically it’s rather bland also, as the rappers are basically verbally mean-mugging for the majority of the album, plus adding touches of the harsh reality of the streets. Probably the best thing about this album is the potential of Kyo Itachi and I wouldn’t mind seeing him work with an artist from the era he is so fond of, say Ras Kass, Chino XL or Canibus, rather than working with the newer generation of rappers which lends itself to too much mimicry as the rappers themselves don’t hail from that era.

It seems lately that hip hop as a whole is missing the old days and trying to revive the old sounds, to varying extents with varied levels of success. I’m not sure whether it’s simply fashionable to do so, or the purity and rawness of earlier hip hop is pushing aside the bullshit and people have a new awareness that they perhaps shouldn’t have left the old sounds behind? The problem with something like “War Face” is that it doesn’t stand out, not as a 2013 release, nor anymore than it would have 20 years ago. Do you think when you are telling your grandkids in 20 or 30 years time (or whatever the case may be) about the good old days that you’ll be telling them about Dirt Platoon’s “War Face”, or the classic albums and artists from years before that it’s taking much of its influence from ? For me, it’s definitely the latter.