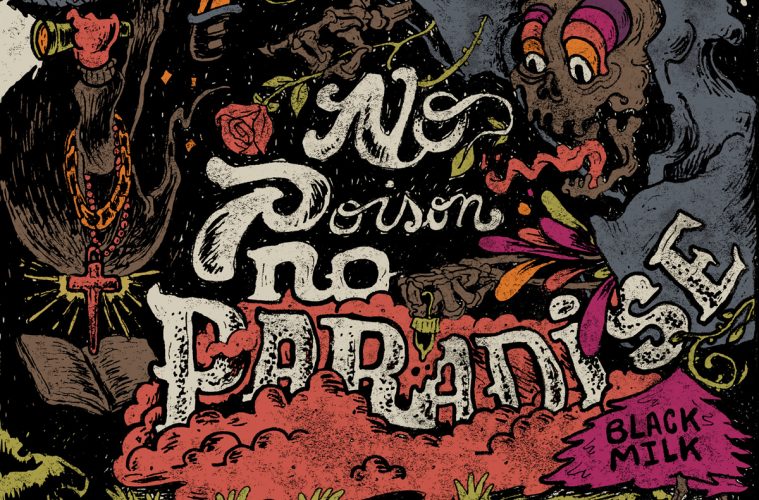 Black Milk :: No Poison No Paradise

With “No Poison No Paradise” Black Milk delivers, in a sense, his best album thus far. It’s a deceptively dark listen (the wonderful artwork should be your first clue), yet his delivery is deliberately toned down in energy, suitably matching the night-time theme. NPNP is effectively an amalgam of the previous three albums, and the end result for a restless producer who has, thus far, experimented without any real attachment. First, he chopped up samples; he ditched the vinyl back in the crate to go electronic; he then unplugged that equipment and hired a live band. His latest album finds him shunning musical innovation and favouring bringing together all three into a concoction principally fuelled by a desire to master his studio engineering skillset. Such a convergence is an interesting and rewarding outlook, not to mention thoroughly predictable at this stage in his career.

At times throughout his career, it has come across as a battle between what Black Milk is good at, and what he actually wants to do; between his talent and his focus; between what we want to hear from him, and his subsequent reaction. In other words, he’s damn stubborn. That can result in great music, though: here he’s challenging us to keep up, jumping from genre to genre, style to style, with liberal use of the FX, panning knobs and brakes. The beats on offer are less that, more genial treats gifted to us from a producer with an innate sense of when to go left when we expected a right turn. In fact, that instinct is ever so slightly toned down on NPNP, yet it recalls Kanye West’s “Dark Twisted Fantasy” – with this being more of a “Darker Tangled Nightmare”. The first listen is a full-on assault of your senses, soon crystallising into more identifiable joints. It’s engineered to perfection.

Examples of Black Milk doing his thing behind the boards include “X Chords” and “Sonny Jr. (Dreams)” – here, there are no real vocals so the gorgeous (in different ways) instrumentals are thrust firmly into the limelight. The lush live soul of “Deion’s House” (the only track not produced by Milk himself) is another standout; “Ghetto Demf” is the shape-shifting polar opposite, recalling those “Tronic” days. The thematic centrepiece of the album comes in the form of a “Sunday’s Best” and the hope-destroying “Monday’s Worst”. It works well with the video, but within the album itself doesn’t make much of an impact. The idea behind Sunny is fine, but again seems to be a half-hearted grope in the dark – and therein lies the problem with “No Poison No Paradise”.

Note my reticent in saying this – I’m one of the few critics who initially backed Black Milk as a rapper, and still do – but perhaps this one (just this one) may well have worked better as an instrumental LP. He’s at a decent level on here, the album is perfectly good. But as an instrumental showcase? This would have been mind-blowing. It’s frustrating, as Milk is such a talent: he’s a throwback who is simultaneously ahead of his time; what he’s doing isn’t necessarily innovative, just the way he presents it. So yes, it is his best album in a musical sense, there can be no doubt of that. From start to finish, it’s markedly more consistent than any of his previous offerings, and he’s put his experience to excellent use. Yet it’s a difficult album to score, as one might argue that aside from Milk gaining his black belt in the studio, this may well be considered an outing without genuine purpose – certainly once the vocals are taken into consideration. We love Black Milk, but what is he actually telling us? Hip hop is an artform based on messages, yet all too frequently he comes across as a messenger with little to report.