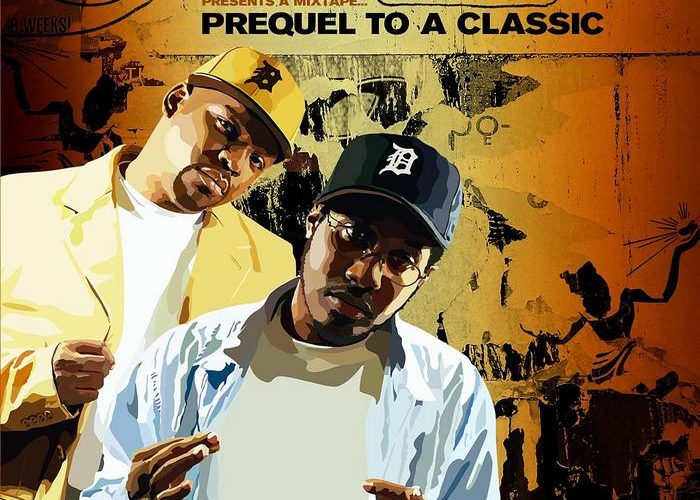 Slum Village :: Prequel to a Classic

Against all odds, Slum Village have always been confident about their place in hip-hop. Whatever critics said, whichever member left the group, whoever blew up instead of them, they remained optimistic, cocky even. That they would promote their upcoming fourth regular full-length with a promotional mixtape entitled “Prelude to a Classic,” shouldn’t really surprise anyone. We reviewed “Slum Village” last week, and as far as I could tell, author Tom Doggett didn’t feel compelled to make use of the word ‘classic.’ Neither did his rating (6.5) suggest that he felt the CD came anywhere near classic status. I haven’t heard “Slum Village” yet, but “Prelude to a Classic” has me neither warming up to Slum Village as a group nor expecting wonders from their self-titled album. Then again, this pseudo-mixtape is not so much a preview as it is a collection of previously unreleased material, some of it dating back several years when Baatin and Jay Dee were part of SV, interspersed with some teasers that may or may not have made the final cut, some of them featured in full length, some of them cut short, the latter (“Can I Be Me,” “Walk Wit Me,” “Ez Up”) following back to back. Any further credits found in this review are to be taken with a grain of salt. For example, the tracklist notes two appearances by fellow Detroit duo Frank-N-Dank, but I fail to detect any guest verses. Also, Dwele is supposed to join them on “Ez Up,” but the current single by the same name features singer J. Isaac.

Maybe long-time followers can confirm my observation that Slum Village songs fit into three categories. Those that woo women, those that tell you that Slum Village will prevail, and those that lament the strife of ghetto life. While these are all topics that hopefully will have a place in rap music for decades to come, I can’t shake the feeling that not only Slum Village limit themselves on the level of songwriting, they also regularly fail to measure up to templates established earlier by more talented acts. Formulas exert a strong influence over Slum Village, and forgetting them for a minute would do the present duo no harm. They’re fixated on formulas to a degree that not even the shifts in the line-up bring about a change in tune. By the same token, their sound is able to absorb even a Kurupt, as the notorious misogynist waxes romantic to the neo-soul thump of “It’z Your World.” Another high profile guest, who coincidentally once featured alongside that very Kurupt on Snoop’s “Doggy Dogg World,” The fabulous Dramatics, lend their natural grace to the Karriem Riggins-produced “Do Our Thing.” Unfortunately, T3 and Baatin forgot to take a clue from the silky smooth flows of the Dogg Pound, as they rap in their typical delivery, a bizarre combination of swallowed syllables and exalted enunciation.

“My Life,” performed by the actual line-up and produced by their current producers (Young RJ and Black Milk, collectively known as BR Gunna), is as symptomatic of the Slum Village dilemma as any other track. Who will be interested in a song flatly advertised by a hook repeating the phrase “It’s my life” in a unassuming sing-song? “My life ain’t no different from yours / it’s full of ups and downs, it ain’t just hoes and tours,” T3 relates, and therein may lie their problem, that they simply aren’t individuals interesting enough to create interesting music. What’s more, even when they present themselves as ordinary people, they immediately aspire for something greater, turning their back on the “ups and downs” the ordinary man experiences: “Let’s say our aim’s the same / we tryin’ to get it, it’s so many things to gain / we want Gucci umbrellas to protect us from rain / we wanna jump in the Range with some chains that swang.” In the end, there’s only so much you learn from a Slum Village album about Slum Village. From T3, Baatin and J. Dilla trying to be memorable “hardcore soldiers” in “Who Are We” to Dilla replacement Elzhi joining the other two for “We Be Dem (Part II),” “bringin’ the horror, the same as acid rain water to a farmer,” you’re not left with much after they’re done introducing themselves. It is likely that they are not aware of this, or else they wouldn’t complain that “some can’t feel our style or feel our flow / don’t know what I speak, never walked my road.” If you fail to come across as intended, it’s only natural to question yourself. Not so Slum V, who rather blame the usual suspects: “Been misquoted, misconstrued / misunderstood and overused / so I take this time to set the record straight / critics get the diddick, we get it anyway.”

Still, this critic can detect redeeming qualities in a group he thinks has yet to justify the accolades it has garnered over the years from devoted fans and otherwise reasonable experts. Due to their lack of mainstream success, Slum Village have retained a non-conformist attitude that cannot be taken for granted these days. They may seem mostly harmless, but when they manage to take their minds off the ladies and the group’s destined fame, there’s suddenly a vigor to their stance that is absent from their appearance. “Let’s Go,” addressing their city, says it (almost) all: “Why you think we got Slum in our name? / To be frank, some of y’all couldn’t stomach the pain / We come from broken homes, broke, alone / Some of us sold coke or what you smokin’ on / I’m just bein’ very real with you / May the chills in you from this song travel from your legs to your arms.” It’s good to hear Slum Village express their intent to make the listener feel something, especially when musically they ever so often fail to do just that.

There’s not much to say about the production, which is largely handled by BR Gunna (who also have two tracks to their own). I hesitate to rate such uncategorizable releases in detail. Ultimately, it’s just one single track that stands out musically AND lyrically, and that’s Elzhi’s solo venture “Time Travel,” an eerie trip across the urban landscape set to an equally gloomy but imaginative background. In fact, Elzhi alone might justify getting acquainted with Slum Village’s new album, as he’s clearly a more accomplished rapper than ex-members Baatin and Dilla, as demonstrated on the otherwise forgettable “Get Ya Paper”:

“A birth brought by meaningless intercourse
unhappy when it’s born and twice when it’s in a corpse
But in between we fiend to live like kings amongst things
that go (*heaving*) and caught in screams of sirens
Can we dream while we still awake? They want us to sleep
but not in bed, just notty heads on the corners and streets
or locked in the jail for better surveillance
while satellites bust UV’s in the sky with they eye on the pavement
Guardian angels keep they eyes on my hatred
I’m tryin’ to turn it back to (love) but they gotta be patient
I’m hungry as hell, you might not want me to sell records
you probably want me to fail inside a cell with a record
from tryin’ to take it instead of make it”