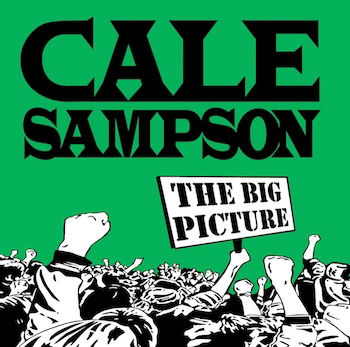 If “The Big Picture” hadn’t been released in September, you’d think it was from a rapper frustrated with the U.S. government shutdown – except of course that Cale Sampson is Canadian. If you believed that everybody in Canada is happy to live in such a peaceful and prosperous country, the Toronto native has another thing coming for you on his album’s opening salvo.

That cynicism is worthy of a Washington, D.C. resident. We already knew he was politically active on his self-titled debut though, when he dropped songs like “The Facts of War” debunking the excuses the Bush administration used to launch a war on Iraq. Whether or not the ends justified the means will be debated for decades to come, but the idea Saddam Hussein had weapons of mass destruction is now pretty clearly ludicrous. Back to the subject at hand though – or if you will “The Big Picture.” Sampson is painting using a rebellious brush here – there’s a familiar echo ofImmortal Technique and Boots Riley in songs like “The Truth Is”:

“Truth is, the C.I.A.
Has a history of smuggling drugs into the States
Their profits are then laundered through banks
In order to help them secretly operate
Cuz’ the truth is, they’ve been involved
In things that should make people appalled
Like mind control experiments on soldiers
To alter their behavior with drugs and hypnosis
Truth is, Nazi’s were the first to try
Putting fluoride into the nation’s water supply
To dumb people down and control what they think
And now it’s in almost all the water that we drink”

After Cale rattles off a list of conspiracy theories ranging from cancer cures being suppressed by big pharma, to Goldman Sachs purposefully causing the banking crisis, he challengers listeners “to write a song as smart as this to debunk me.” This is where I must sound a cautionary note. I’m the first to advocate not having blind faith in the fourth estate, but I’m also equally wary of the unregulated nature of the fifth, and the human tendency to regard the written word as being imbued with inherent truth whether delivered with ink OR digitally. I’m a healthy skeptic of even healthy skeptics, so while I enjoy a good conspiracy theory, I am often inclined to treat them as little more than fiction. It’s entertaining to speculate that George Bush was behind 9/11, but it’s also inconceivable for more reasons than one can list here.

“The Facts of War Part 2” tries to prove FDR purposefully instigated the bombing of Pearl Harbor, and that Lyndon B. Johnson staged the Gulf of Tonkin incident to launch the Vietnam War and let the U.S. military industry profit from it. Without a long political dissertation, it should be noted there were TWO Gulf of Tonkin incidents, and Sampson doesn’t differentiate one from the other when he says that Secretary of Defense Robert McNamara admitted the incident never happened. A U.S. already scared into believing a menacing “red tide” of Communism was sweeping the globe was ready to accept both attacks occurred without substantial proof of the second. Humans have been noted to be “scared, panicky animals” before – and a sitting President had been assassinated the year before. Was LBJ a purposeful warmonger using a false report as a pretext to war? This is not an issue that can be settled in a six minute song when it’s something historians still debate 50 years later.

Here’s what I’m in favor of about Cale Sampson – he’s willing to challenge the status quo, advocate for the 99% over the 1% (as “The Money Song” says “banks get bailed out/we get sold out”) and use strong beats from Andre Flak, Muneshine and Fresh Kils as the backdrop to his political diatribes. His press release describes him as “a serious lyricist” and there’s no question he’s committed to an activism that borders on anarchist. As bad as the U.S. government is at times though, the shutdown has convinced me that the LACK of government isn’t necessarily a better alternative. Millions are suffering as a result of the stubbornness of both political parties to negotiate, which makes me happy to be a registered independent. I’m an independent on Cale Sampson too – I advocate his right to question what’s true just as much as I advocate your right to question his answers. Believe nothing blindly but do open your eyes to see things from all sides and your ears to hear his message.