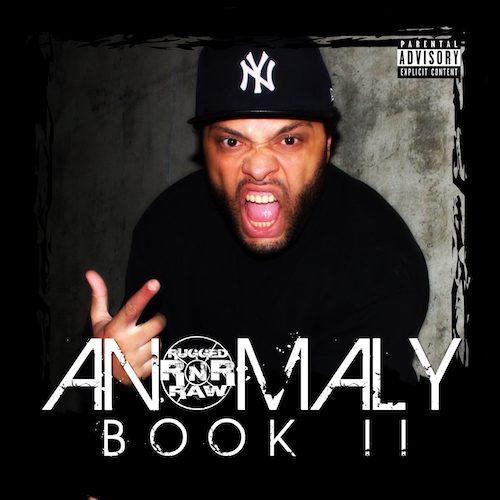 I’m taking a bit of a shot in the dark on this one since I’ve not heard “Anomaly Book 1” and only know of Rugged N Raw by reputation from a fellow hip-hop writer who urged me to check this one out. Furthermore I’m going to frustrate many of you who might want to check out this album because it’s an ADVANCE COPY, which means the number of clips I can share from it is severely limited, and I can’t even tell you when to cop it in stores. I’m basically going in with one arm tied behind my back, typing and reviewing one-handed and still trying to give you something to get down with. Looking through the other side of the screen I picture an incredulous reader saying “Da’fuq Flash, seriously? How are you gonna do me like that?”

As it turns out though I think Rugged N Raw justifies the pain for both you and me though, so as I try to slip the bonds behind my back I’m going to give you the brief biographical info I’ve been able to glean about the emcee. He hails from New York but now lives in Boston, he’s a die hard Buffalo Bills fan, and he once made a “best albums of the year” editorial on this very website back in 2008. So yeah that’s a late pass on my part given one of our own staffers was bigging him up back then. Life’s funny though and you can’t always get to everything you want to no matter how highly recommended they might be. If I had unlimited time and unlimited funding I would still only be able to review a third of what comes across my desk. Anyway as for this album RNR produced everything except for “Bottom of the Barrel” and “Judge Free Zone,” which were produced by DJ Static and I.mpaq respectively. On “Split Personality” Rugged shows his versatility by acting as his own director too. I always wonder how that works in practice. “Okay me, what I need me to do in this scene is…” Perhaps that justifies the whole “Split Personality” gimmick.

If I said Rugged sounds like a prototypical New York emcee, you might read that as “average” or “nothing special,” which is not at all what I’m trying to imply. There’s actually a unique tint to his vocal tone even with the East Coast accent and swagger. He’s not spitting with a deep baritone nor is he gassed up to a super high level — the closest I can think of at this exact moment is a young Masta Ace mixed with a middle aged L.L. Cool J. There’s just something about him that reaches through the headphones and grabs me by the ears on tracks like “Every 5 Minutes,” where Rugged is going through the struggles many heterosexual men do when beautiful women seem to be everywhere yet shyness and intimdation get in the way of saying anything. “I’m a quiet guy, I can’t flirt for s–t.”

“There’s too many fine women
For the world to be stressed how I make a living
Out in these streets my head always spinning
Bet they’d be much more comfy on my linen
Since eye candy’s a cure for the Mondays
Fell in love four times on the subway
Huh! Twice more on my lunch break
And my walk home always turn to a runway
If she with her man I won’t act rudely
Take five steps, then look at her booty – damn!!
No need for squintin, my periphreal vision
got my chick radar on a mission (I’m on it)”

Rugged definitely should have been reviewed before now. He’s got a naturally self-effacing sense of humor like some of my favorite nerdcore emcees (Skyblew and Random come to mind) but he’s not rapping about video games and comic books. That’s not to say he couldn’t though – he’s operating in a “Judge Free Zone” where he doesn’t down anybody for what they do or what they’re into. Rugged has that quality that I really appreciate in any emcee – the ability to tell me a story and make me feel where he’s coming from like I just stepped in his shoes. I understand his heartbreak on “Loved and Lost” and I get the passion on the “See the Light.” Since they’re self-produced that’s extra props that I can heap on Rugged’s plate. Give an extra serving to whoever chopped up C&C Music Factory on “Dance Now” because to me that s–t’s hilarious. Bottom line is I can’t tell you when where or how to cop “Anomaly Book 2” but I +can+ say I liked it enough that I’m gonna look for “Book 1” now.