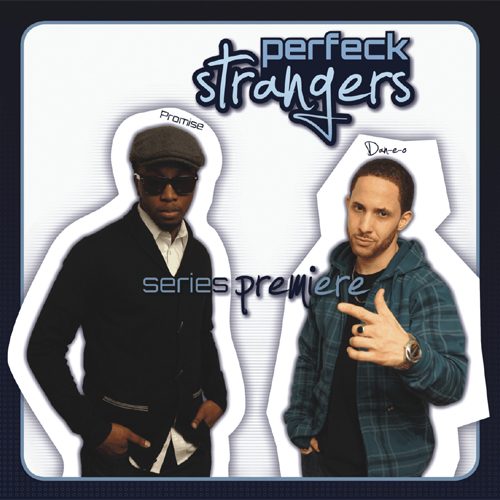 Let me just say straight up that Perfect Strangers

is one of my favorite sitcoms of all time. I suppose it doesn’t hurt that I grew up as a child of the 1980’s, in a house that didn’t have cable TV, and Lord knows 300 baud dial-up modems didn’t make for a thrilling internet experience. For entertainment that didn’t involve a paperback novel or an original (brick) GameBoy, watching the antics of Larry and Balki on Wednesday or Friday nights was about as good as it gets. Just give me a sandwich, a soda and a bowl of popcorn and I was good to go. Not watching my favorite show? “DON’T BE RIDICULOUS!!!” You’d have just about much luck asking me to turn off Doctor Who or The A-Team, but those are topics for another review. Besides it’s conceptually easy to base a rap group on two distant cousins coming together to collaborate, though on the first single “Ghetto

” that theme was put in the background as Promise & Dan-e-o focused on social commentary:

Promise: “I was once asked
How you write, how you write if you don’t puff grass?
When you blow up, it’ll show up in your lunch tab
but you’ll be bankrupt (why?) Because you flunked math
Thinkin fire burnin was a higher learnin, bump dat – see he’s just twelve
Reverend tryin to show him heaven but it’s just hell
How you expect him to win when all he does is puff L’s?
So his success just fails”

Dan-e-o: “Yeah, your third eye got the cataract, Cringer before Battle Cat
I’m a real tiger that’s in a fake habitat
Take y’all blabber back – quiet all that violent rubbish
See I’m an English major – I don’t get the science cousin
I’m sick and tired of the slush that’s your mindstate
Flushed out, declined and crushed like some wine grapes
You ain’t got a dime? Wait, something I perceive’s funny
Yo you got weed money, but can’t get no beats for me?
Get off the streets homey, you gotta live
Get a life, get a job, cause dog, you got a kid”

Even though it may come off as harsh in print, there’s actually a whimsy and humor to the song, thanks to the harmonica and the harmony plus a collaborative third verse about “a mindset that’s monumental” like “shiny rims on the car (but) he can’t drive you far cause his license was lost, there’s nothing in the bank, so he’s got an empty tank – now that’s ghetto.” It was a good introduction to the duo collaborating though, especially for those who know Dan-e-o better as a soloist, and “Series Premiere” is an excellent follow-up. The album’s introductory track “Perfeck” features a banging beat and sung vocals by Naya Marie, and this time the duo explore their thematic inspiration by playing the roles of Larry and Balki themselves:

Promise: “Now, now let me tell you ’bout my family
More specifically about my cousin Balki, Dan-e
Called me to say he wasn’t happy
And see, he out of state I told him “get on a plane and come gladly”
(Yo, for real Promise?) Sure, I promised your daddy
In America, you can be all that you can be
I ain’t living like a prince here
But yo, as long as you can get here, I’m saying you can live here”

Dan-e-o: “Yeah, my cousin Larry welcomed me with open arms
This world is scary, it often greets your hope with harm
Knowing just to cope is hard, he Promises we’ll work it out
(I know my place is small but you’re welcome to my couch)
See, I’m a foreign man, I live a constant scam
where dreams are crushed, so I’m hoping I’ve found the Promiseland
He says he’s formed a plan fraught with prosperity
Thank you cousin for the support and taking care of me”

I dig it, but as the opening paragraph already illustrates, I was preconditioned to dig a product or project inspired by the comedy stylings of Bronson Pinchot. The album’s other ten songs are the make or break point, and it’s safe to say they make it. The bouncy beat, slick R&B sample and money-earning lyrics of “Work to Do” are 100% on point – two emcees constantly hustling to make a hip-hop living while pondering economic realities like “Should I leave a tip for this drink?/Cause I might need the change, man this game really gets to me/I own a crib but can’t afford my destiny.” They don’t get down about the struggle as “Come Back Home” proves though, as they rap about finding “H.E.R.” again and coming back to the love of Kurtis Blow and Run-D.M.C. with the help of Justin Nozuka on the hook. The slick deejaying of “Dust to Dust” is met by thoughtful lyrics about the perils of one-night stands, while the symphonic “True to You” with Naya Marie proves they’ll never give up on hip-hop no matter how hard it gets:

Promise: “I got flavor like a taste test that I test that was hot
Like a pair of Nike Air, I’m fresh out the box
I’m out, fly a kite, I want that high life
Go get a Diet Sprite, cause I want that lime-light
Tired of labels tryin to label what I sound like
You sound nice, well what would you do for a Klondike?
I tell ’em, ‘I might speak over these beats with a passion’
They say ‘Alright, can we get piece of the action?’
But I don’t wanna sign your, your dotted line
for the dollar sign, get it? Bottom line
I wanna be me, I do what I do
With my CD, I am the best with haikus
I’m blessed like achoo!! Excuse my flu
Ain’t nobody but me spittin’ sicker than I do
With minimal efforts, my records Jive like Clive do
Dude, I had a voice since Royce was five-two”

Over half of the tracks on the 12 song “Series Premier” feature cameos, but none of them are unwelcome in any way. Wordsworth and Yonatan Watts both shine on “Dreams,” and EmceeNemesis is a perfect (no pun intended) compliment to Dan-e-o and Promise on “Gonna Make It.” It’s a little bit shocking that P and D are as good as EPMD on their debut LP, because they sound like (and are produced like) a duo that has been together for years instead of just now dropping their first album. That owes in part to how experienced each rapper is individually, but doesn’t account for the natural chemistry they have together collectively. That ultimately makes the metaphor of Perfect Strangers ideal, because even though Mark Linn-Baker and Bronson Pinchot are accomplished actors separately, it was the camaraderie they had together that made their TV show such a pleasure to watch. This album has it too.