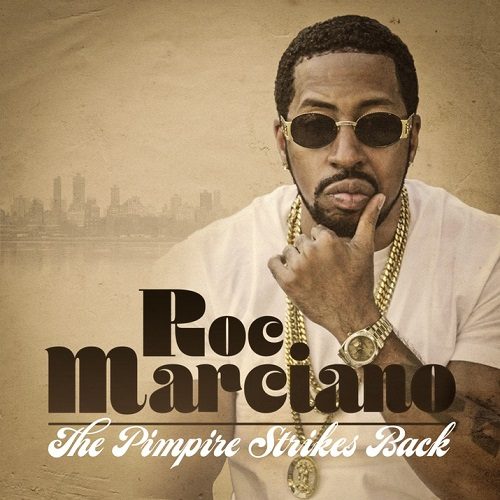 Roc Marciano :: The Pimpire Strikes Back

Any regular readers will know by now – I fucks with Roc Marciano. His two solo efforts: “Marcberg” and “Reloaded” were critically adored yet criminally ignored. Of course, the music Marciano makes wouldn’t get radio play anyway, and nor should it. I doubt I’d want to hear his intense, assonant-heavy rhymes in between Katy Perry and Macklemore. The masses would need him to do an Eminem and ensure a catchy hook is in there somewhere for me to hum at my desk when I get to work. Marciano is most certainly a rapper’s rapper; an emcee who makes hip hop for those who appreciate the intricacies of a verse. He knows that the best emcees grab the listeners’ ears and do not let go.

Looking at the content of a Roc Marciano album (or song) would have you believe that he just spits aimless, gangsta shit. In a sense, you’d be right – but he is a surprisingly likable character for somebody that claims to be so ignorant. You never feel intimidated, and always welcome to join the New York native on his journey through wildly vivid scenarios that have an effortless professionalism to them. Openly admitting that he is “too New York to not smooth-talk”, this FREE mixtape is served up with another hefty helping of street slang and dirty riffs to help prepare the world for “Marci Beaucoup”, to be released in December.

Much like the gritty soundscapes that were created on 2010’s “Marcberg” and last year’s “Reloaded”, this mixtape is strictly for the gangsters. Inviting guests in to contribute rhymes has been something Roc has refrained from on previous efforts, but as this is a mixtape he has allowed for more experimentation. While the likes of Knowledge the Pirate and Meyhem Lauren don’t stand out, there are two emcees that’ll already be on the radar of a Roc Marciano fan: Cormega and Action Bronson. Rhyme aficionados probably had wet dreams seeing that Action Bronson was on “Sincerely Antique”. Having recently converted to Bronsonism, I’m still finding his shock value lines can sometimes ruin some of his hard work. Just yelling â€˜foreskin’ at the start of his verse means I’ve got the mental image of his pale dick in my head before the songs even gets going. It’s annoying, particularly as Roc doesn’t disappoint. Thankfully “Velvet Cape” is a second chance for the two wordsmiths to impress, and it fares a lot better:

Roc Marciano: “My bitch is built like a yak
My kicks is a rack
Open your chicken wrap
Wings on the pigeon flap
Still rock fisherman hats with the slacks
You’re listening to facts
Nothing false
My heart won’t defrost
Send shots back and forth
Serve soft, ho circle us all
Dipped in velour
Kiss the gift horse (muah)
A eighth off the bricks chipped off (break â€˜em off)
Rose gold links from Panama
Tan lines from camel rides
Smooth like the Phantom glides
Fly eyewear, diamonds is rare
Fresh out of Zaire
I’m on a higher tier
Dry your tear
Pop guns by the pair
One in the trunk, call that a spare
Lift you in the air
Ligaments tear”

Action Bronson: “My mind is different though
Just lift your chain over your neck
Don’t make it difficult
These choices I make
No need for explanation
Exceeding expectations
I’m like a surgeon deal with daily operations-
Of the life we live
Green drugs rolled up in paper
A very subtle Meyer lemon sauce
Sicilian capers
Moroccan razors
Cause life is all about a balance
Good come with the bad
The plain comes with the palette
It could get violent
Send your body to the stylist”

Regardless of Action Bronson’s involvement, the appearance of Cormega on “Ruff Town” is worth the admission price alone. Admission price here being “effort to download”. Cormega is a rapper that just doesn’t release albums as often as I’d like, and who has probably been superseded by the likes of Roc Marciano. Mega has always had a minimalist production behind him, and an uncanny ability to mix street stories with lyrical flair, all while sounding totally natural. “Ruff Town” isn’t going to set the world alight, but with a sweet horn loop and a simple hook of “Sometimes you’re up some down, I grew up in a rough town, bust a round smoke a bus down, I’m not the one to fuck around”; it’s a strong way to end the tape/mp3.

But what of the other 13 tracks? Unlike his albums, Roc has thrown in some skits which would usually be tagged on to the end of songs, a feature I hope isn’t going to occur on “Marci Beaucoup”. Hip hop is beyond skit tracks, surely? Does anybody really listen to skits more than once? Regardless of this, there’s some dope, ass, beats here. Madlib supplies an irresistible loop on “The Sacrifice” which adds a cartoonish-ness to Roc’s pimp character, that is so self-indulgent it becomes borderline parody. Lines like â€˜she wants to sacrifice her body, she wants to buy me that Bugatti’ are reminders that beyond all the wild shit coming out of Roc’s mouth, he is having fun with it. He â€˜skips court dates just to fornicate’ on “Doesn’t Last”, then â€˜smashes ratchets until his penis is flaccid’. The frequent way that Roc describes weaponry and violence is often majestic, as if Raekwon had written his rhymes with a thesaurus to hand. In this day and age, after hearing hundreds if not thousands of rap artists sharing stories about sex and violence, this is proof that it CAN still be told in an interesting manner.

Rugged behaviour is all over “The Pimpire Strikes Back”, but there are times where the vocals sound rough, but not in the good way. It’s clear some of these songs may have been throwaways from upcoming (or previous) projects, and for that it doesn’t really matter too much – this is free music after all. Saying that, it does mean that this mixtape has more moments where you will skip to the next track than the standard output from Roc. “Ten Toes Down” is Roc at 50%, while “Higher Learning” feels like a simple lyrical exercise to flex the muscles. Musically, “The Pimpire Strikes Back” throws up a few surprises: “German V’s” sees Roc apply an 80s throwback vibe along the lines of Prodigy’s “Product of the 80s” album, but with a slow, mournful violin somehow fitting in too. It’s initially offputting, but after hearing it once is actually one of the best beats on offer here.

The best thing about this record, much like with Bronson’s “Blue Chips 2” mixtape, is that it is free. There’s really no argument to deter you from trying these artists. Both have a strong following that swear they are amongst the illest emcees around at the minute, and it’s good to see such a gritty style of hip hop still gives people that fix they need. “The Pimpire Strikes Back” is rough, but a good taster for anybody yet to sample the delights of a man who quite simply has a “way with words”.