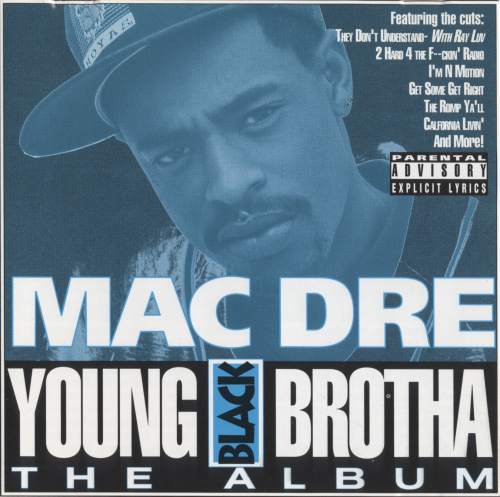 1993 was a good year for hip-hop music. The Wu-Tang Clan dropped their classic debut that year. On the other side of the country the world was formally introduced to Snoop Doggy Dogg. The Native Tongues crew was in full force then. Some people might even point to that year as the beginning of rap’s best era. Artists from both coasts were getting exposure and there was still plenty of room for acts like ATCQ and Digable Planets. Yet with all this shine going around, the hip-hop community still missed out on at least one notable event from 1993. That year also saw the release of Mac Dre’s debut “Young Black Brotha: The Album.” Some of you might be scratching your heads as you’re reading this thinking, “Who the hell is Mac Dre and why should I care?” Others might have heard the name and dismissed him as just another gangsta rapper from the west coast. But Mac Dre is far from your local rapper who never quite made it. He is to Vallejo, CA what Lil Keke is to Texas, what Hitman Sammy Sam is to Atlanta, what Esham is to Detroit…the list could go on and on. For well over ten years Mac Dre has been quietly making a living off of this rap thing and has done so without a major label release or any other commercial exposure. If that wasn’t impressive enough, he has released over 10 solo albums and numerous compilations during that time, Dre is no slacker. And even though he still isn’t as well known as he could be, his debut album is no less important in the short history of hip-hop.

“Young Black Brotha: The Album” not only introduced the world to Mac Dre but also to other major Bay Area players. On the rap side of things the album includes collaborations with The Mac, Ray Luv, Coolio AKA Da Unda Dog, and most notably Mac Mall. While all these rappers are well known in the bay area, Mac Mall is probably the one who has gained the most commercial success, mainly through a record deal with Relativity Records years ago. But even of greater importance than the guest rappers is the producer, Khayree, who handled almost all of the production on this CD. Why Khayree has never blown up is still a mystery to this reviewer, but I will elaborate on that later. To most people none of these names ring a bell, but to any bay area rap fan the list reads like an all-star game line-up.

The actual album is divided into the “Romp” side and the “Crest” side, a reminder of how popular cassette tapes were back in 1993. The intro track, “2 Hard 4 The Fuckin’ Radio,” has enough old school flavor to make any rap fan happy as Mac Dre brags:

“Listen up, I’m about to get dope
It ain’t nothin’ but some shit I wrote
About a young brotha deep in the game
They call me Mac Dre and I’m keepin the name
I sport Nikey shoes, I got a mic to use
To talk bad about suckers, I don’t like the fools
Down and dirty bout spittin’ my hits
And if not, I’m gettin’ my grits
Playin’ the game like it’s supposed to be played
Makin’ much more than the minimum wage
Not a pimp daddy, don’t drive a Caddy
I just mack and get all that babby
Dre, you know I never slow down
Smokin cesstee until I’m really towed down
Walk into the party, fully perked
Grab the microphone and let the mouthpiece work
I got hype and the game starts flowin’
The girls get freaky and it starts showin’
And when the party’s over at the end of the night
They say: Damn, Mac Dre you ain’t nothin’ polite
Cuz I’m the numero uno, could never be the dos
A Mack named Dre and I’m poppin the most
18, makin’ raps ’til I’m 80 though
And too hard for the fuckin’ radio”

The beat by Khayree is equally old school as he sticks to hard snares and a funky bassline accented by cow bells to provide the back ground for Mac Dre’s game. The hook has a sped up sample of Chaka Khan’s “Tell Me Something Good” that adds to the flavor (Yep, that’s right – for all you Kanye and Heatmakerz fans, this cat was doing it over 10 years ago). On “All Damn Day” Dre keeps the mackin’ alive with this message:

“I’m hard but saucy bitch back on off me
Steady tryin’ to toss me, ho smell the coffee
I gave you some ho, did not cum though
Your too damn dumb ho, what you actin’ sprung fo’?
I’m hard to get with, pimperistic
I want your lipstick on top of my dick tip
I’m from the V-A double L E-J O
and you know ho,
the things that we say Are simple and plain, nothing but game
And if you aint up on it Mac Dre is the name
I want a fat ass joint of that potent zesty
And a thick chocolate bitch whose name is Nestle
From the C-R-E-S-T, ’cause thats where the best be
Suckas get jealous and they try to test me
So I carry a nine all the time
Dope raps I rhyme, this is how I grind
Making stacks of cash, down to wax that ass
A nigga ready to blast a muthafucka real fast
Dickin’ the ho’s, never lickin’ the ho’s
Big black dick is what I stick in the ho’s
shake ’em, I break ’em,
but never will I take ’em
To eat hamburgers let alone some steak
and Lobster, ’cause baby I’m a mobster
you tell your friends how I robbed ya”

Khayree comes through yet again with another dope beat and a hook that would make DJ Premier and Stoupe jealous. The beat is a bit more laid back that usual, but includes an fat bass line and piano and guitar loops that fit to perfection. The hook is a medley of Mac Dre samples, a technique that is still in heavy use nowadays, and to top that all off Khayree manages to include scratching throughout the track to satisfy all the hip-hop purists out there.

It should be pretty obvious by now that Mac Dre’s main concern is mackin’, and though some people might scoff at this, just like Too $hort, it’s not what you say, it’s how you say it. Mac Dre has flow, no question about it. That intangible ability to say things right, on time, create new cadences, accentuate the right syllable, etc… are all qualities possessed by Dre. Even on tracks like “Young Black Brotha,” where he speaks about a serious topic (the plight of young Black men in this case), you are still drawn to Dre’s flow. Especially for a debut album, Dre’s performance on the mic is impressive. Dre seems very aware of his ability as he professes “Cause I’m a fly young brotha with a gift of gab And bitch dont let it get ya mad” on “Young Playah.” The fact that part of the album was recorded over the phone when Dre was locked up for conspiracy to commit robbery only emphasizes Dre’s commitment to his rap career. Mac Dre is the type of rapper who could rap about nothing and still maintain your attention.

Khayree’s performance throughout this album is also impressive. His production is based on the fundamentals of most bay area rap, tight drum tracks complemented with deep bass lines. Just like the music found in L.A. and the rest of California, it’s all about the funk and soul and Khayree’s music reflects this. But instead of spitting out cookie cutter tracks, Khayree’s beats incorporate many different instruments and samples to keep things fresh. On “Young Black Brotha” Khayree’s production is straight up jazzy, with a trumpet sample that sounds like something you would expect from East Coast hip-hop at the time. “I’m N Motion” features a straight up sinister beat that drives the track with a smooth flowing bass line and a few samples that fit the track like a glove. From trumpets, flutes, pianos to ill vocal samples and scratches, Khayree really crafts great music through out this album. Khayree’s production was tight when it came out, and the amazing thing is that it’s still tight today. His production from 11 years ago is better than a lot of the stuff coming out today.

So what happens when you put a tight rapper and a an equally tight producer together? In this case you get a great album that really captures a moment in time and space for hip-hop. The chemistry that Mac Dre and Khayree show is like none other. This CD should have done for Vallejo and the whole bay area what “Doggystyle” did for Long Beach. It contains all the elements of a classic hip-hop album: a rapper/producer duo that fit each other perfectly, a crew that includes of lot of up and coming and talented rappers, and a healthy dose of repping your side of town. While it didn’t put Vallejo and Mac Dre on the map as it should have, “Young Black Brotha: The Album” is still classic in it’s own respect. It spawned the career of one of the game’s most prolific, though lesser known, rappers and it introduced the world to other noteworthy artists such as Mac Mall, Ray Luv, and Khayree. Most importantly, this album truly captures the essence of what the bay area rap scene has always been about with its funky beats and mackin’/rappin’. It’s also a reflection of bay area living thanks to Dre’s vivid narratives. If you ever wondered what all the hype behind the bay area is about, this is the perfect place to start, that is if you can get your hands on a copy of this classic CD (or cassette). Good Luck.